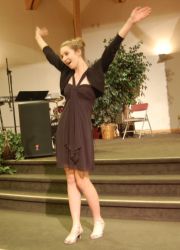 To belt or not to belt? This is often a controversial question within the singing community. Part of the controversy lies in a preconception about the term “belt” and how it is used in musical theater. Belting has a bright, often brassy tone quality with significant power.

When talking about belting it is useful to understand the terms head voice and chest voice. Chest voice, where the sensations of the voice vibrate in the chest, is often used in pop music and is used in the lower ranges of the voice. Head voice, where the sensations vibrate in the head, is associated with the female classical voice, is used in the upper range and is called “legit” (meaning “legitimate”) in musical theater. Belting can be defined as pushing the chest voice up past the natural transition into head voice; when done improperly it can result in a “break” or sudden flip into the head voice register.

With Broadway-style singing, a safe alternative technique that comfortably executes the demands of today’s musical theater uses a combination of both head and chest voice or “Mixing”. Ideally in mixing, both registers are blended to achieve a unified voice. To acquire this, the entire vocal range, particularly the head voice, must be strengthened and developed. Eric Howe, voice faculty at Holy Names University says, “The voice involves many muscles, and often some of the muscles need to be strengthened and coordinated to work with the other muscles.” Here are some things to keep in mind:

If you sing primarily in your chest voice, spend as much time as possible singing in your head voice to strengthen that sound.

Unhealthy belting can create excessive tension in the throat. Vocal cord injury is common. So find an experienced teacher who can monitor your progress. Learn to mix in a healthy way and your vocal cords can enjoy a long and fruitful life.

Sarah Sloan is a classical singer and voice teacher in the East Bay. You can find her blog at www.sarahsloan.net.