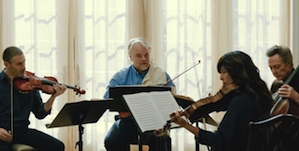 A string quartet with Christopher Walken, Philip Seymour Hoffman, Catherine Keener, and Mark Ivanirl sounds improbable, but there it is, the four struggling with music and life in Yaron Zilberman's A Late Quartet.

In the film — screened at the Mill Valley Film Festival on Oct. 14, and opening commercially on Nov. 9 — Walken, who plays Peter, has health problems; Hoffman's Robert is overambitious; Keener's Juliette and Mark Ivanir's Daniel confront a variety of issues; and on top of it all, they are preparing for a recital of Beethoven’s Op. 131 String Quartet in C-Sharp Minor.

After 25 years of collaboration, the Fugue Quartet (the quartet's name), the cellist (Walken) tells his younger colleagues that he is in an early stage of Parkinson's, and will retire immediately. Ah, but there is the Op. 131 to perform first ...

A report from Toronto says there are a half dozen music coaches listed in the end credits, so the bowing must look fairly authentic. The music sounds great: It is by the Brentano String Quartet. There is also music by Haydn, Bach, and Strauss; the four stars have been getting star treatment in reviews.