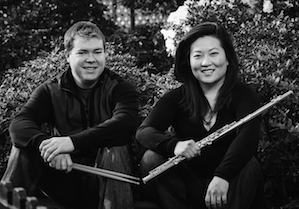 Flutist Meerenai Shim and percussionist Chris Jones, the A/B Duo, will make their debut on Sept. 27 a the Center for New Music. On tap: "a lot of live electronics," and local chiptune/8bit composer Matthew Joseph Payne's Echoloquacious. (Sorry, I have no idea what chiptune/8bit is, but surely Google can help.)

Publicist Annie Phillips promises a 6 p.m. performance (nice!), including drinks, snacks, "and a post-show mingle with the players." All for $20. Everything on the program is a premiere.

So if it's 8-bit x 8-bit, wouldn't it be 64-bit, the current standard, and not a throwback to the Intel 8008 of the late 'Seventies? Listening to Payne's Wuthering Heights gives few clues, and isn't the accompaniment reminiscent of a scene from a certain well-known Prokofiev ballet? Sergei Sergeyevich — no 2-bit composer he!

Other program items are Things We Dream About, for flutes, vibraphone, and drumset by rock drummer Ivan Trevino, of the Break of Reality band; and metalStaind for piccolo and percussion by Adam Cuthbért.

Shim's most recent record, The Art of Noise, features new works for solo fute and electronics by Daniel Felsenfeld, David E. Farrell, Jay C. Batzner, Janice Misurell-Mitchell, and Payne. When not busy with A/B, Jones is pursuing a Doctor of Musical Arts degree at the Eastman School of Music, and he performs with Ensemble Dal Niente, the Anaphora Ensemble, and Third Coast Percussion.