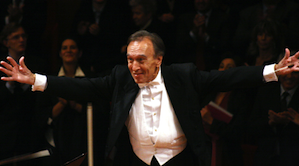 Not only a great conductor, Claudio Abbado was a remarkable man in many ways. The Italian conductor who died Monday in Bologna, at age 80, after a long series of illnesses, impressed deeply everyone around him.

At all his musical posts — La Scala, Berlin Philharmonic, Chicago Symphony, Vienna State Opera and Philharmonic, Maggio Musicale; and orchestras in London, Salzburg, and Philadelphia — he was beloved, even revered by audiences, musicians, and colleagues alike.

One of my many unforgettable experiences of Abbado was his superb musical direction of Parsifal at the Edinburgh Festival, leading the Gustav Mahler Jugendorchester — a brilliant post-training orchestra of young musicians from all over the world. During intermissions in nearby cafes, I talked with the musicians — some not even age 20 — from Germany, Finland, and Japan, and whenever the maestro was mentioned, their response was the same: respect, awe, and total dedication ... and their playing reflected that.

This was shortly after Abbado's cancer surgery, he was still recovering, but as he was conducting the long, difficult work, his strength seemed to return in full, and the performance reached a shattering peak. It was only during the ovation when Abbado turned around that the audience could see how how weak and exhausted he was, having put his all into the work.

Health problems rarely stopped him, giving in only when the task became impossible. Even last fall, Abbado planned to lead the Lucerne Festival Orchestra on a tour of Japan, including Suntory Hall in Tokyo and a new inflatable concert hall in Matsushima that was to be dedicated to a region recovering from the 2011 earthquake. Finally, in September, Abbado said "I deeply regret that we have no choice but to cancel all our concerts due to reasons of my health." 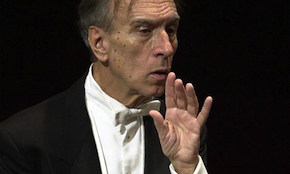 And yet, beyond his heroic struggle with illnesses, Abbado's determining characteristic was strength and power: heard overwhelmingly in his Mahler Sixth Symphony; the sweeping (unsentimental) romanticism in Schubert; the acuity of his coaching, shown and commented on by the musicians in Lucerne.

The man many of his obituaries today call "mild-mannered," could also be fierce on behalf of his art and fellow artists. Also at La Scala, an opera house known for its attendance by the rich and royal of Europe, Abbado took the orchestra out of the theater and into factories to perform for workers.

Reviews about Abbado often reached for superlatives or even beyond. An example: Tom Service writing in The Guardian in 2011:

Something weird happened last week at the Royal Festival Hall. At the end of Claudio Abbado's performance of Bruckner's Fifth Symphony with the Lucerne Festival Orchestra, what I experienced — along with thousands of others in the hall, and thousands more listening on Radio 3 — felt like a vision of infinity, a collapsing of time and space into a single point of brilliance and intensity. Abbado and his musicians seem to achieve more through the medium of the concert than Cern's Large Hadron Collider has managed in years of experiments.

If there's a creative precedent for this Brucknerian infinity, it's probably the Total Perspective Vortex in Douglas Adams' novel The Restaurant at the End of the Universe, a device that shows how unimaginably tiny you are in the context of all things in the universe.

Tributes in response to Abbado's death

"He was a great musician and a great man. I had the privilege of hearing him in Berlin in 2000, when he conducted Mozart's Mass in C minor and Beethoven's C-Major Piano Concerto with Alfred Brendel as soloist. His warmth, generosity, and humanity came through in every bar of both works. I'll never forget it.

"One of the last great romantic conductors — maybe the last — and a musician of unique warmth, intelligence and integrity."

I had quite a few very happy experiences working with Claudio and adored him just as everyone did. I sang Cenerentola at La Scala with him and did a film and recording, and Pelleas also at La Scala and at Covent Garden and had the most wonderful tour of singing the last movement of Mahler's Fourth Symphony with him many times.

He was one of the greatest musicians I've ever known and the dearest humans, and I loved being with him always. His son Sebastian and my Jen played with each other a couple of times when they were very little. I know that he had been ill and have sent notes in the last years, and think of him very often.

His images in the 1992 Berlin Final Trio of Der Rosenkavalier with Kathy Battle and Renée Fleming under his direction are just so everything I remember about him: quiet force and dignity, great and noble musical and artistic conviction.

"We are mourning an extraordinary musician and person, whose love of music and insatiable curiosity were an inspiration to us." 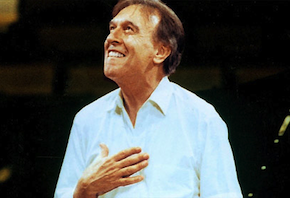 It was with a sublime, deeply moving moment of unending musical silence that Abbado concluded his artistic work on 26 August 2013 in Lucerne, with a performance of the Ninth Symphony of Anton Bruckner, a musical fragment. There was a sense in the hall on that evening that it might possibly be his final concert, so far removed and deeply transfigured did Claudio Abbado seem to all of us on this unforgettable evening, in this moment of unfathomable silence.

Today, to our deep and overwhelming sorrow, this inkling became a reality. "Wanderer, there are no paths. There is only wandering." This quotation, which Claudio Abbado’s long-time friend, the Italian composer Luigi Nono, discovered on the wall of a monastery in Toledo, might also serve as an emblem for the life of Claudio Abbado: not to map out one’s life according to certain paths but rather to proceed, to live, and to remain open to experiencing what is new. In other words, a pathless wandering and searching. In just this sense Claudio Abbado always "pathlessly" sought out the new and unknown in his creative work, and he did so right up until the last second of his very full and fascinating life.

The year was 2003, when someone informed Maestro Abbado of a young Albanian tenor who had recently won two major voice competitions . The Maestro decided to hear me, I do not know exactly why: iIt could have been a curiosity to hear a tenor in his early 20s or the fact of my actually being Albanian since he was holding auditions for Mozart’s Così fan tutte. The two protagonists are called to disguise themselves as Albanians, and perhaps I, too, was intrigued by the strange coincidence of seeing an Albanian interpret the role of an Albanian.

I remember it so clearly, as if it were now; after only a few minutes, the Maestro told me that the role of Ferrando was mine. It was one of the first roles that opened doors for me to start on the path of my international career, a difficult role to sing at such a young age. Maestro Abbado had faith in me and I've always felt that he helped me and sensed with full conviction what I could become. This was not only valuable for me: There are hundreds of young artists whom Claudio Abbado discovered and guided on the magnificent journey of music and who now play, sing and conduct on the most important stages in the world.

In addition to being a great Maestro, Claudio Abbado was also a great man whose heart was full of love for all, and especially for what had been his entire life: music. Thank you for always believing in me, Maestro; my memory of you and your teachings will always remain indelibly in my mind and in my heart.

Medici.TV has put together a collection of biography, videos and interviews, including Abbado's performance of all Beethoven and Mahler symphonies, his activity in Lucerne, and much more. These vspecial ideos are available with a free subscription, not requiring payment.