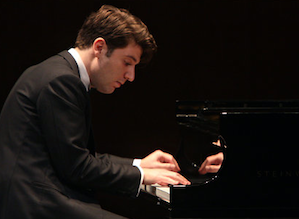 Steve Smith's review in The New York Times said of Alessio Bax: "Everything in his program unfolded with an ease, precision, and beauty so seemingly effortless that the music appeared to live and breathe of its own volition."

Not only is the 36-year-old Italian-born pianist getting rave reviews like that, but he continues to take on new challenges, instead of coasting on past successes. When he appears on May 11 at the conclusion of [email protected]'s Winter Series in the Menlo-Atherton Center for Performing Arts, Bax will play Beethoven’s Hammerklavier Sonata and the original 1874 version of Mussorgsky’s Pictures at an Exhibition.

When Bax gave this program in Lincoln Center last month, he said of the sonata, which he has been performing for almost 20 years: "The longer I live with it, the more it amazes me ... Each time I play the Hammerklavier in concert, it is like leading a group of climbers to new vistas in uncharted territory. And that is incredibly exciting." See a preview of the concert.

Bax is a winner of the Leeds and Hamamatsu international piano competitions, a 2009 Avery Fisher Career Grant recipient, and has appeared as soloist with more than a hundred orchestras worldwide.