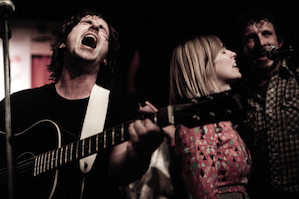 It's so difficult to squeeze Adam Arcuragi into a box that the best thing is not to try. Folk? yes; modern? yes; Western? yes; choral? yes; classical? yes ... and so on. His Death Gospel, created with his band, the Lupine Chorale Society, is just one of the many ways he has made an impression.

Arcuragi, with Cheyenne Marie Mize is performing on a West Coast tour on these dates:

Then points East and South.

I like various attempts to describe the Arcuragi sound, such as "A Philly soul with the old-school power of Van Morrison and Bruce Springsteen ... infectious, breathtaking and just so good for a rousing sing-along," mused Bob Boilen, on NPR’s All Songs Considered (definitely a program to sample).

Other approaches: "raw, openhearted indie folk" ... "like traditional gospel, but with sweeping melodies and complex instrumentation"... "hypnotic melodies and chamber choir," and so on. Look him up when he is in your neighborhood.