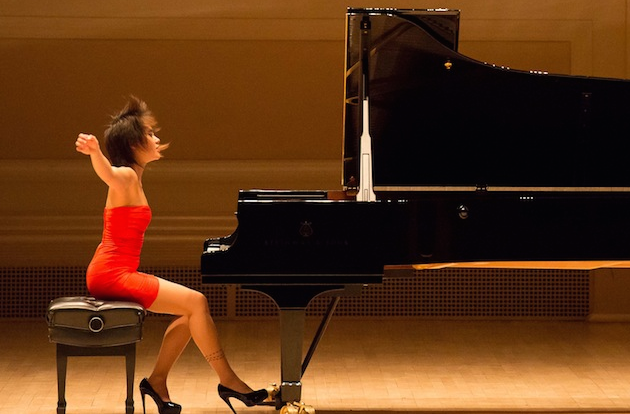 Yuja Wang is known for flying fingers, not-your-grandmother’s concert wardrobe, and a musicianship that blends youthful enthusiasm with interpretive insights far beyond her 27 years. A veteran of the world’s great concert stages since bursting onto the international scene a decade ago, she continues to grow as a thought-provoking, intelligent artist with an expanding range of musical interests. She’s a particular favorite here in San Francisco, where her ongoing partnership with Michael Tilson Thomas and the S.F. Symphony began in 2006 and continues this season, as she joins the maestro in celebration of [email protected]

She returns to Davies Hall on December 1 under the auspieces of S.F. Performances, with a solo recital of late works by Schubert and Scriabin — not a program for your typical 20-something virtuoso. We talked about youth and age, and how sometimes it’s all relative.

Musically, you already have a lot of living behind you. You’ve compared yourself to Benjamin Button, starting out your life as an old person and getting younger over time. And this recital program you’re bringing to San Francisco is very much music for an old soul: one of Schubert’s last sonatas; Liszt arrangements of the posthumous Schubert Schwanengesang (Swan Song) lieder; the late Scriabin Sonata #9 (“Black Mass”). Tell me about your relationship to these very mature works, as a still young artist with long musical journeys ahead.

Well, I think the late works of the great composers are always the most interesting, both compositionally and also in terms of the creative development. Like Scriabin, on this program I’m playing a group of pieces, from Op. 9 to Op. 68, to show how his music evolves, from really early, very Chopinesque, to the middle years when it gets a little weird, to the end where he just kind of goes crazy, and it’s so dark, almost hellish.

And the Schubert, too: It’s funny, I was proposing this late Schubert and Scriabin program in Asia and the presenters all said it would be too hard to sell! This the first time I’m playing Schubert in concert. The piece is very enigmatic for me, especially the second movement — it’s just the most moving, touching music, and then so crazy in the middle. I’d say both of these pieces have a little bit of dementia to them! But you know, we think of these composers’ late works as representing their old age, but Schubert died at, what, 31? So I’m not so far from where he was when he was writing his late works.

When an artist looks back at his or her young years — you know, someone in their 70s looking back over half a century — there’s a tendency to think that the first go-arounds were lacking a certain level of information or life experience. But that’s hindsight. Is it exciting for you to look ahead, and to imagine what will change in your interpretations over the same long span of time into your future?

“You know, we think of these composers’ late works as representing their old age, but Schubert died at, what, 31? So I’m not so far from where he was when he was writing his late works.”

I am sure everything will change over time and if it doesn’t, that’s not good! That’s true for everything. I mean, I played Chopin when I was 7, and people say “Oh my god, you should never have done that!” But it was what it was. Of course everything grows, and the earlier I learn a work, the longer I can keep it with me and let it develop. That’s what’s fun about learning music, playing music. It just sort of miraculously happens as you go along.

Right now it’s brand new — I’ve just learned the Schubert sonata for this season — and there’s freshness and an excitement to that, too. There’s an element of mystery: I’m searching and looking for things, and I doubt whether I’m really finding them. It’s such an experience, unlike anything I’ve ever played before, because all the dramas are so internal, the struggles and changes are so subtle. I don’t know, maybe it will make me grow older sooner!

It seems you’ve always had a curiosity about life, an engagement with the wider world outside of the practice studio, which shows up in your playing.  What words of advice would you have for piano students about how to balance the discipline of studying the instrument with the importance of learning about who you are as a person in the world?

I think it’s important to find the joy, find the real bliss in being able to share what you do musically with other people. To enrich your inner life is so important: reading, reflecting — mostly reflection, understanding what we’re doing, and being clear about what we’re doing, to avoid being distracted by the noise of the external world.

There are so many things that are misleading and superficial these days — there’s a fine balance between being open and curious, and being distracted. It’s even hard for me, to recognize it and avoid being trapped by it, to avoid being scattered. Social media, all that. I’m working on finding my own balance, especially with traveling every day and having to get through all the practical details of life. To actually be in the world of the music, of the composer, it takes time, it takes dedication. It’s almost like meditation. God, I sound like some sort of religious fanatic or something!

But that’s what practice is, I think — meditation. It’s a ritual. Tell me about your rituals and routines, your survival techniques for staying sane and happy on the road.

It’s really hard. Every day it’s a different reality. I was just in Toronto and my guardian and many of my friends were there from China, and then the next day I was in Montreal where I didn’t know anybody. Day by day, you just don’t know what to expect. But after a while, you sort of get used to this constant randomness. And then of course it’s very nice to be home in New York.

You get so used to having an itinerary every day on the road, you kind of lose your ability to know what to do with your free time! I guess the thing that really sustains me is my iPad, with all my music and books on it. I use all the long flights to read all the books I’ve downloaded — I always have such a long list of things I want to read! And of course having friends around me is always the best.

Do you have good friends out here in S.F.?

You know, I think I have more friends there than in New York! I’ve been playing in S.F. with MTT every year since I was 17, so there’s a group of really loving, kind people there, and I always want to go back sooner and stay longer. This time, I’m staying an extra day just to spend time with friends.

Where do you like to hang out when you’re here?

Well, I usually end up at Absinthe or someplace right near the hall! But when I have a chance to go out with my friends, there’s also such amazing Chinese food in the city, much more authentic than what you can find in New York. I really love that!