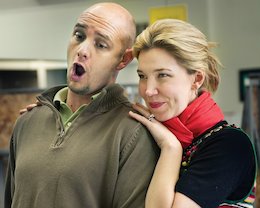 Opera Parallèle, the newly renamed Ensemble Parallèle, won first prize in the professional division of the Opera Production Competition by the National Opera Association for its 2012 production of John Harbison’s The Great Gatsby. The award will be presented at the association's national convention on Jan. 5, in Portland, OR.

Opera Parallèle's next production is the Bay Area premiere of Osvaldo Golijov’s Ainadamar on Feb. 15-17, in the Yerba Buena Center for the Arts.

On April 26, 27, and 28, the company presents at ZSpace the San Francisco premiere of Garth Sunderland’s re-orchestration of Leonard Bernstein’s Trouble in Tahiti in a double bill with Samuel Barber’s A Hand of Bridge. The season closes June 7 at San Francisco Conservatory of Music with a public workshop reading of the company’s first commission, Dante De Silva’s Gesualdo, Prince of Madness.