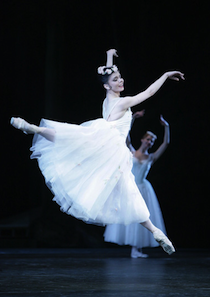 Ballet San Jose Artistic Director José Manuel Carreño has announced that the company is going on tour with former Bolshoi Ballet stars Natalia Osipova and Ivan Vasiliev in performances in Southern California, Moscow, and London this summer. The concerts will feature Osipova's and Vasiliev’s debuts in Roland Petit’s Carmen with Ballet San Jose, the rest of the program comprising pas de deux to be performed by Osipova and Vasiliev.

The schedule for the tour, presented by Ardani Artists: July 25-27 at the Segerstrom Center for the Arts in Costa Mesa, CA; July 31 and August 1-3 at the Stanislavsky Theatre in Moscow; and Aug. 6-9 at the London Coliseum in London.

Ballet San Jose concludes is current season May 9-11 at the San Jose Center for the Performing Arts with performances of Carmen and Twyla Tharp’s In the Upper Room.

Osipova was graduated from the Bolshoi Ballet Academy in 2004, joining the company in the same year. She was promoted to First Soloist and then Leading Soloist in 2008, named Principal Dance in 2010.

Alexei Ratmansky's The Flames of Paris, starring Osipova and Vasiliev, was recently filmed by Bel Air Classiques for future DVD release. The performance was transmitted live into movie theaters across Europe.

Ivan Vasiliev was born in Vladivostok, he studied at the Dnepropetrovsk Ballet School in Ukraine and later at the Belorussian State Choreographic College in Minsk, graduating in 2006. In 2006 he was invited to join Bolshoi Ballet as a soloist, making his debut with the company, at age 17, as Basilio in Don Quixote. He was promoted to the rank of principal dancer in 2010.