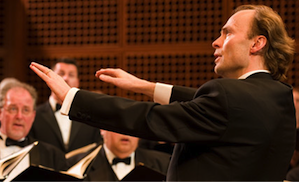 Independently of his day job, San Francisco Symphony Chorus Director Ragnar Bohlin is heading a new professional chamber choir being put together at auditions this month.

Cappella SF will perform a cappella choral works from all periods, including newly commissioned works. The group's debut, in February, will reflect Bohlin's Swedish background with a program of Swedish and American composers, featuring a cappella works by Mason Bates, Anders Hillborg, a commissioned piece by Fredrik Sixten, and Eric Whitacre.

Three more concerts are planned during the year. Auditions take place through Nov. 29 by appointment in response to registration by e-mail.

Although the Bay Area is rich with choruses of all sorts, I think there is definitely a place for a professional group that does the entire spectrum of the a cappella classics, everything from the Bach motets and earlier music, through Mendelssohn, Brahms, Strauss, Stravinsky; to 20th century classics such as Poulenc, Schnittke, Arvo Pärt, and new commissions.

For the future, I envision this group encouraging more people to sing in mixed a cappella ensembles, and that we, through various forms of educational outreach throughout the Bay Area, inspire people to delve into the riches of the a cappella classics."