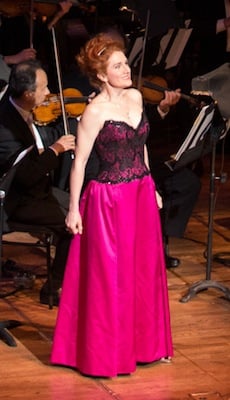 Barbary Coast and Beyond was an amazing display of musical diversity: classical, marches, marimba, banjo, national anthem medleys, musical saw, opera, and a piece that was written for fourteen pianos. Conducted by Michael Tilson Thomas, it was a two-and-a-half hour-long journey through seventeen pieces from 1849 to 1925, an era of many musical styles. Narrated by Val Diamond, with projected images in the background, it was not only a concert, but a funny and intriguing history lesson as well.

The reflective acoustic squares on the ceiling gave the audience an aerial view of the orchestra as they grandly proceeded through the Coronation March from La Prophete and three lively pieces for banjo, right into an aria from Les Filles de Cadix (The Girls from Cadiz) sung by Laura Claycomb, a soprano with a clear voice and a range of pitch that could go as high as a mouse and still sound amazing. She appeared three more times, each time in a different dress.

Next came two pieces that were very different. A Mountain Vision: quiet, dewdrops, and sunrise. Then came a piece from the musical drama Mazeppa: being strapped to a wild horse, escaping wolves, and dodging obstacles.

After that came a piece that was written for fourteen pianos, but played on one. Pianist Anton Nel played amazingly well, with a lot of big arm movements that showed how much he loved playing. A few songs after that came part of the Orpheus in the Underworld overture, with the added instrument of the electric saw, played by Caroline McCaskey. It added a very dangerous and creepy feeling to the piece, although sometimes it felt disconnected from the rest of the performance.

After the intermission came a piece called The Earthquake in San Francisco, which had the piano act as both a musical instrument and a sound effect machine. A little later came three pieces in a row that really got me excited: part of Tchaikovsky’s Pathétique symphony, then The Stars and Stripes Forever played on the Davies Symphony Hall’s gigantic pipe organ by Cameron Carpenter. It sounded like multiple instruments at once, and sounded even better with all the different chords in the background, although sometimes it was too much and it sounded slightly like he was pressing his arm down on the keyboard. After that came a piece from Hail! California, which was an incredible combination of the French and American national anthems.

The concert finished off with three sing-alongs that gave it a very fun end: Hello, Frisco, Hello from Ziegfield Follies of 1915, San Francisco, the previously official song of San Francisco, and California, Here I Come.

The performance ended with a minutes-long standing ovation, of which the concert was definitely worth.

Calder Hansen, 11, is a student at Dunham Academy, the Marin School for Gifted Education in San Rafael.