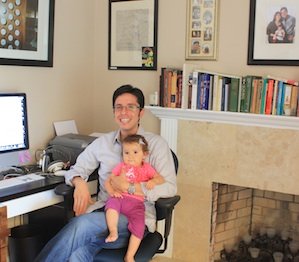 The very model of a modern, cool composer, 27-year-old Noah Luna, while awaiting his SFCV interviewer’s arrival outside the funky 7 Mile House in Brisbane, makes sure he stays in touch with his fellow composers and the rest of the world on Facebook. “I was sitting in my car, checking me in here,” he recounts later, over dinner. “And I was saying that it was by far the strangest place I’d ever met anyone for an interview.”

We were there to discuss his creation of opportunities that complement his income and his vocation as a composer.

Talking about musical survival while enjoying good food and the sophisticated live sounds of Al Molina & The Horace Silver Project was actually not that much of a stretch for a guy who grew up in Mountain View playing pop rock and jazz guitar years before he ever wrote his first classical piece in college. “I love Count Basie,” says Luna, reacting to one of the band’s upbeat numbers. “He’s the one who taught me that you can do so much with so little.”

That theme of creative economy continued in Luna’s composition studies with Conrad Susa at the San Francisco Conservatory. “Susa has this big wooden plaque above his window that just says Simplify, Simplify, Simplify, and every time I would write in his office, that’s the thing I’d be staring at.”

Yet it was an earlier college instructor, Rafael Hernandez, at what was then known as Cal State Hayward, who made Luna aware that merely getting his compositions heard might not be so simple. “When he came to the school, [Hernandez] noticed a trend of, for want of better words, lazy composers. They were not only not producing [enough] music, but after you get the music done and recorded, what do you do with it? My first private lessons with him, he shook me up, man, and got me good and scared for what was coming up.”

In Search of the (Good) Day Job

What Luna and his contemporaries would be facing — and still are — was a world where making a living in music would require rethinking the storybook stereotype of the creative genius, infatuated with his or her muse. “It solidified the idea that composition wasn’t the only thing I could do to make money,” Luna says about Hernandez’ caveats. “There are only a handful of guys who do that as the only thing they do.”

Luna is particularly attracted to collaborative projects. He cites as an example the Incredible Shrinking Orchestra project of the San Francisco Chamber Orchestra, in which a team of young composers collectively reduces a classic orchestral score. Luna arranged a section of last year’s reworking of Stravinsky’s Rite of Spring, and now serves as the project’s editor.

While continuing to compose throughout his schooling, Luna founded a second career with Beauty in Cacophony Press (BCP), which takes its name from a college prof’s comment about Olivier Messiaen’s love affair with birds.

“What we do is all the prepublication stuff that composers need done,” Luna explains about BCP. “When a composer finishes a commission, he sends it to us. We clean it up, make all the parts, and print out scores and parts for rehearsal and performance, before they get sent to a publisher. I do it in my pajamas.” He also teaches guitar, at West Valley Music, a studio in Mountain View not far from his house in San Jose, which he shares with his wife, Sarah, a labor delivery nurse, and daughter, Violet, who will celebrate her first birthday at the end of this month.

Composing still counts large among Luna’s multitasks, and he’s found that his early experience with rock and jazz “makes me very marketable. The documentary film I’ve been working on, Drawing Dead, by Mike Weeks, involves a number of classical cues, but the stuff that goes underneath voiceovers has to be almost like hip-hop remixes of those cues. Also, I just had my first big orchestra premiere with the Berkeley Symphony.”

In the coming months,

Myself, Rafael Hernandez, Mark Ackerley, and some other composers are trying to work hands-on with the Friction Quartet in creating a new piece of music, so that we can show the world and other composers that this is what true collaboration looks like. We’re filming and recording all of our sessions together, and we’re gonna turn it into a full-length album and DVD, to generate funds for future versions of this project. We want it to be almost like a reality TV show where you see us show up, not knowing exactly what’s gonna happen. And we’re hoping to generate buzz, especially with social media.

Luna demonstrates, before and during our interview, how integral social media can be to the life of a contemporary musician. “If we didn’t have them, we wouldn’t survive,” he claims. “Facebook is being in touch with people over a long period of time, where you can watch a product develop. Every business has a Facebook page, including BCP, and I love that we can give little teasers about what’s coming out. Twitter is great about being in touch with people in real time.”

“If we didn’t have social media, we wouldn’t survive.”

Among those Luna stays in touch with is Mason Bates, one of BCP’s clients and a paradigm of what Luna calls “a superstar composer. He writes concert music, whether it’s with electronica or not, and he’s a successful gigging DJ. And he runs [the touring hybrid show] Mercury Soul, which just played in Chicago, and BCP did all the parts for that. He tweeted me from the performance, talking about all the people he saw there: Riccardo Muti was just hanging out, having a drink dancing it up, along with 40-somethings who are there just to hear a Xenakis quartet on the same set as some Deep House music. Pretty cool stuff, I think, and that’s why he’s successful.”

Luna also remains in contact with a number of his former fellow-Conservatory composition students. “The class I was part of is doing really well for itself,” he says, beaming:

Josh Fishbein just won the BMI Student Composer Award. Bobby Chastain is finishing his doctorate at the University of Oregon, and has won all kinds of awards up there. Mark Ackerley just designed a scheme to take someone’s DNA and make a unique melody out of it, and he pitched that to the company he works for down the Peninsula. All these unique and innovative approaches to music-making as a career are coming out of my class. And there are so many more avenues to write music — and have people actually hear it — available now than there were even five years ago, with the advent of YouTube as well as other multimedia that need music.

Luna is optimistic about the support for composers in the classical establishment, including showcases like the Cabrillo Festival, which he calls “a great platform to launch composers,” and the New World Symphony. “MTT [Michael Tilson Thomas, conductor of the latter orchestra, in Miami] is such a champion of new music,” says Luna.

“There’s an audience out there, no matter how much people like to talk about how classical music is dying and concert halls are going out of business.”

Alex Orfaly got in touch with us because he’s done a couple of premieres with them. It’s a great way not only for young musicians to get their legs, playing in an orchestra, but also for young composers to be able to work with the same musicians who are soon going to be entering top-flight orchestras and will need connections with young composers. Other conductors I think of are Esa-Pekka Salonen and Gustavo Dudamel [the previous and current music directors of the Los Angeles Philharmonic]. They’re people who are always commissioning new works, working with young composers, and encouraging young conductors like Benny Schwartz [of S.F. Chamber Orchestra, and others].

And the new media, besides facilitating communication, have provided composers with an exciting virtual venue. “Mason Bates has a relationship with MTT, and MTT has been working with the YouTube Symphony. I talk with Mason, he sends stuff electronically to me, we prepare music scores, we send them to Sydney [Australia] for conducting and performance, and I get to watch the performance [on YouTube] in my pajamas, while my daughter is sleeping.

“There’s an audience out there,” Luna assures me, “no matter how much people like to talk about how classical music is dying and concert halls are going out of business. So if Mason Bates is heard of by some kid who only goes on YouTube to watch funny cat videos and Dubstep remixes, I feel like there’s hope.”