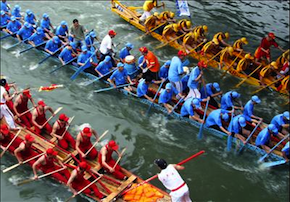 Yes, we have the America's Cup in the pond next to the Marina Safeway, but there is also a waterborne event that's less known, more exotic.

This Saturday and Sunday, from 8 a.m. to 5 p.m., on and around Treasure Island, the international water dragon race will take place, part of the 17th Annual Kaiser Permanente San Francisco International Dragon Boat Festival. Viewing the race and attending the festival are both free and open to the public.

Paddlers from the UK, Germany, and Canada will vie with US teams in this, the Year of the Water Dragon. As always, Music News provides full information, so consider that Water Dragons — governing East/Southeast, the accumulation of wealth, and the hours of 7-9 a.m. — come about only every 60 years, otherwise, it's just a Year of the (Plain) Dragon. This is the first Water Dragon since Eisenhower and Nixon defeated Stevenson and Sparkman, that is to say 1952. (Extra points for identifying Sen. John Sparkman of Alabama.) 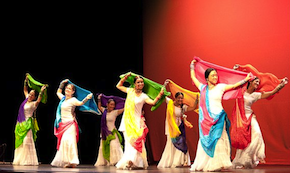 Sixty years is as nothing against the history of dragon boat racing; it started in the southern provinces of China 2,000 years ago when an advisor to the Chu emperor jumped into the Mei Lo river in protest against government corruption (remember, this was a long time ago). Fishermen raced in their boats to save him, they beat drums, pounded their paddles on the river's waters and threw rice dumplings wrapped in silk into the river to distract the water dragons. And so we come to Treasure Island and a re-enactment of all that.

Participating boats have 20 paddlers, a drummer and a steerer. Crossing the finish line first is the goal, but audiences also treasure the pomp and circumstances. 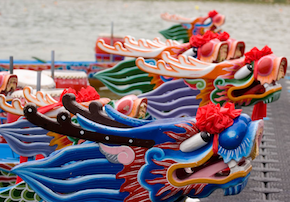 "No one who has discovers dragon boating leaves unchanged," says Festival Director Linda Cheu. "Only recently are people outside of Asia beginning to see and experience the magic team and community building aspects of this ancient sport."