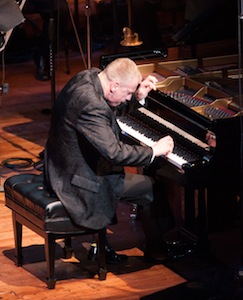 Entering Davies Symphony Hall in San Francisco's Civic Center, no one knew what to expect. To help celebrate the one-hundredth anniversary of the San Francisco Symphony on that Thursday in May (also tied into the seventy-fifth anniversary of the Golden Gate Bridge and the Gold Rush and the Panama Pacific Explosion), the famous Michael Tilson Thomas conducted the full orchestra.

This intriguing performance had many guests to attract old-time subscribers and give them more excitement. Val Diamond was my personal favorite part of the show because of her enthusiastic attitude, coming from her former job in North Beach with Beach Blanket Babylon. Laura Claycomb performed amazingly as soprano, and we were almost transported to the Opera House in San Francisco in the performance because of her acting along with her beautiful singing. Vadim Gluzman performed a piece from fellow violinist Ole Bull without a dramatic feature.

One of the next special guests was Anton Nel, who was very involved with his work and played with his shoulders hunched forward over the piano in a very dramatic work of music. From the hours he spent practicing, I’m surprised he didn’t have a hunchback! The song had many twists and turns and surprising visits of forte and piano. The unforgettable Cameron Carpenter presented himself with a mohawk, and he had glitzed up his coat with flared ends. Bill Evans, Jody Stecher, and Scott Nygaard kicked off the show on their banjos. The banjo trio played three pieces, with Jody Stecher singing “Hard Times Come Again No More” by Stephen Foster. Finally came Caroline McCaskey with her diverse talent of the musical saw. After her song, Thomas gave her a hug for her courage in learning the instrument, which many of the audience members thought was funny.

To conclude the very enjoyable night, there was a sing-along of Hello Frisco, Hello and San Francisco. This very exciting and climactic night ended fantastically.

Eleanor Gillis, 11, is a student at St. Cecilia's in San Francisco's Sunset District.