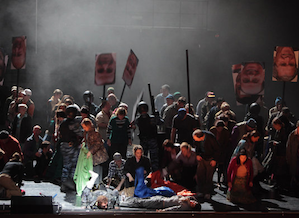 On Friday, the Bavarian State Opera will stream live and free the 10th and final transmission of the season, beginning at 11 a.m. on the West Coast. It is Eurotrash Bad Boy Calixto Bieito’s production of Boris Godunov, with sets by Rebecca Ringst.

In The New York Times review of the production, George Loomis wrote:

In a plot alteration, six characters in the Bayerische Staatsoper’s new production of Mussorgsky’s Boris Godunov meet untimely deaths. The escape by Grigory, the Pretender, from the police as he flees an inn on the Lithuanian border is normally a challenge to stage, but when the woman Innkeeper (here a pushcart vendor) guns down both officers, Grigory has an easy time of it.

After rebuffing Boris, the Holy Fool, who embodies the conscience of Russia, is shot by a young girl. And while Boris’s life slips away in the final scene, Grigory, suddenly back in Moscow, snuffs out the lives of the czar’s son and daughter and their nurse.

In short, the director Calixto Bieito has not lost his appetite for violence. Its relevance here is presumably to suggest that forceful suppression of its people by an all-powerful government corrupts society generally. (The Innkeeper also whips her little girl, an event that, fortunately for the audience, takes place out of its sight range.)

The problem is universal. In the first scene the crowd, kept under wraps by armed guards, carries poster-pictures of Nicolas Sarkozy, George W. Bush, and other familiar faces. For Boris’ coronation everyone furiously waves the Russian flag, although when the ceremony is over they immediately look dejected and wander aimlessly off. It is a telling moment, that their enthusiasm was hardly genuine.