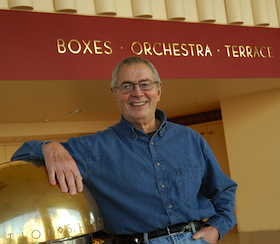 There he was last week in the lobby of Davies Symphony Hall, at the intermission of a superb Messiah performance (see below), talking proudly of his birthday. "It's my reverse 18th," said Horacio, beaming with pleasure and looking like a real 18-year-old, not a reverse one.

And yet, the truth is the San Francisco Symphony's head usher, a restless dynamo, the man everybody calls Horacio, rather than Mr. Rodriguez, has turned 81, celebrating his 53rd year as the ever-present, ever-helpful, ever-cheerful usher/major-domo, now for SFS, and before at the city's opera and ballet companies.

One of the many remarkable things about Horatio is that regardless of which side of Grove Street he worked at, he has always been present — officially or as a civilian music fanatic — at symphony, opera, and ballet performances. That, of course, goes back to the time before Davies Hall opened, and all three companies occupied the War Memorial. Since the birth of Davies in 1980, he has been in charge as head usher.

What does that job entail? Much, much more than meeting and greeting: He hires and manages the hall's many ushers, is in charge of handling the crowds coming and going, up to 2,739 in the audience, 4-5 times a week, even more during the holidays.

A subscriber to local theater companies, a film buff, and passionate music fan, Horacio's greatest passion (besides pianist Martha Argerich) is opera. He has fallen in love with dramma per musica seven decades ago in the famed Teatro Colón of his hometown of Buenos Aires. He arrived in San Francisco in 1958, while in Argentina the Perón regime held sway, started as a volunteer with San Francisco Opera, met and — six years later — married Angela Quigley from Cork, Ireland.

There are still some music lovers around who remember the Opera's legendary head usher, John Galindo. It was Johnny who hired Horacio, first for the War Memorial, then to manage Herbst Theatre, and when Davies opened, to be the Symphony's head usher.

As to Horacio's management acumen, most of the ushers he hired in 1980 are still working there.