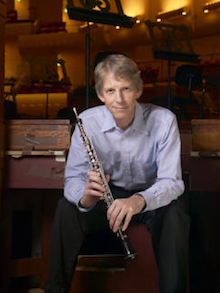 When oboe student Sydne Sullivan heard Thursday that her teacher and San Francisco Symphony principal oboist William Bennett had passed away, she immediately went searching through her stuff for a remembrance, in the form of a video she’d made of a project he’d challenged her with at the San Francisco Conservatory.

“Our assignment was to make a transcription and arrangement of any song, but not a classical oboe piece,” Sullivan recalls. “I chose a Michael Jackson song, Billie Jean. And I made Bill play the Michael Jackson [vocal] part, because I knew he would have a lot of fun reading something different. It was something he really liked to do himself.” She found the video, and can now replay the fun as often as she likes.

Sullivan and several other Conservatory students were in the audience at Davies Symphony Hall last Saturday, when Bennett collapsed onto the stage after finishing the 57-bar introductory passage to Richard Strauss’ Oboe Concerto. Despite his fall, he’d managed to hold his instrument aloft until it was recovered by a violinist, and he was attended by his wife Peggy, a physician, until being transported by paramedics to a hospital. His death five days later was attributed to a cerebral hemorrhage.

“A lot of times, we students would go [to Symphony concerts] simply because Bill was playing a solo,” reports Sullivan. “I remember sitting there thinking, ‘How is Bill going to play this?’, because it wouldn’t be how another principal player would. He was never afraid to take risks, his playing was not at all safe.”

Steve Paulson was also there last Saturday, occupying the Symphony’s principal bassoon chair. He’d joined the orchestra in 1977, two years before Bennett, and also shared a studio with Bennett at the Conservatory. “His students worshiped him,” Paulson says, although “he was very diligent about the student getting everything right.” Sullivan had been working with Bennett on the Strauss Concerto, and had performed it with the Conservatory’s Chamber Orchestra, conducted by Paulson. “The thing he said to me on several occasions was that he was always happy to see how brave I was, and in the repertoire I would choose to tackle,” says Sullivan about Bennett. “Every single student that he heard play, even if other teachers would have torn them to shreds and made them feel really bad, he always found something to say to encourage them. A lot of other people in this community don’t react that way.”

Bennett himself had studied at Juilliard and at Yale, where his father, co-inventor of the gas laser and an amateur clarinetist, was on the faculty. The New Haven-based family apparently shared good humor and eclectic musical tastes, both of which Bennett brought to his performing and pedagogic professions. “He had a sense of irony that I really appreciated,” says Paulson, “and each time he’d come up with a comment on something on the human condition, politics, the world of music, people, anything.” Bennett also entertained his colleagues with well-drawn caricatures while on tour, and took his mother, Fran, along on the Symphony’s junket to Asia last November.

“He was the first person I ever heard to suggest that Ella Fitzgerald could influence your oboe playing,” attests Sulllivan. “In his studio, he had pictures of Ella up, and also of Dizzy Gillespie. He would encourage us to play along with her records, and wanted us specifically to mimic the phrasing, the vibrato, and tone color changes. Of course, the oboe is known to be an instrument close to the human voice, and he took it very literally, he would have us mimic voices.” She observes that the Oboe Concerto by John Harbison, commissioned for Bennett by the Symphony and premiered by them in 1992, “shows a lot of the jazz influence that [Bennett] always brought to his playing.”

Bennett matched his relaxed, inclusive approach to instructional repertoire with casual dress at the Conservatory. “People see images of Bill in his tux,” acknowledges Sullivan, “but I want people to know our experience of Bill, this effervescent personality who always came to class in jeans and a t-shirt and his colorful Nike shoes.”

Bennett’s passion and humanity shone through his formal wear on stage, where his repertoire extended from Baroque to contemporary. “With MTT, we recorded all the Mahler symphonies, and the Second has a [mezzo] vocal solo in it, which was sung by the late Lorraine Hunt Lieberson,” recalls Paulson. “The movement within which she sang [the fourth] is a sort of duet with the first oboe. And between her heartfelt rendition and his, where one just sort of melted into the other, it was one of the greatest recorded musical moments that I know.”

Plans for services are pending, but in the meantime waves of regret and admiration have surged quickly through periodicals and social media. Members of the New York Philharmonic tweeted their well-wishes during Bennett’s hospitalization, and musicians and fans registered thousands of comments on the Symphony’s Facebook page and the CaringBridge website after the oboist’s passing.

“He was one of those personalities where people hear his playing and everyone thinks they know him, because he put so much of his own personality into his playing,” Sullivan points out. “I feel really lucky to have had this time with him.” “We all have years and years and years of memories,” adds Paulson.