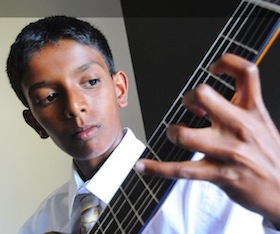 Fourteen-year-old Los Altos middle schooler Ashwin Krishna has already spent a couple of years gathering awards in statewide and national competitions, including the first-ever win for a guitarist in the Pacific Musical Society’s instrumental category. But one of his greatest pleasures was performing his favorite song, Andrew York’s Sunburst, and a traditional setting of Albeniz, for Iraq and Afghanistan war vets at the nearby Veterans Administration Hospital in Palo Alto. “It cheered them up a lot,” Krishna testifies.

Next month, he’ll be taking Sunburst to Carnegie Hall, where he’s been chosen to appear on the PBS program From the Top before a potential television audience of 700,000. Young Krishna has been playing guitar since age 4, and first heard the song on his father Kris’s iPod. “It’s very happy and lively,” he points out. “The beginning isn’t very hard, but the end is, because it has a lot of unusual continuous slurs.” Another of his current projects is a transcription of one of Bach’s Brandenburg Concertos, which he’s been working on with a guitar quartet at the San Francisco Conservatory of Music.

Krishna is in his second year of study with the Conservatory’s Scott Cmiel, after several previous years in the Suzuki Method. Cmiel’s “is a much more open way of teaching,” says Krishna. “If I want to learn a song, I just tell him and he’ll give me the music, and I start learning it.” Cmiel has also used his widespread connections to guide his student towards worthwhile competitions, and prepare him for the challenges. “He always tells me to sleep well and relax. And not practice too much.” 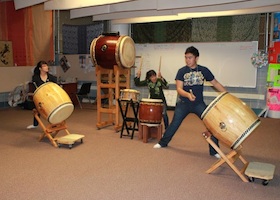 After six years of teaching taiko drumming to students at San Francisco’s Academy of Arts & Sciences, Monina Sen Cervone thought it was high time to install a World Music Program at the School of the Arts (SOTA), which shares a campus with the Academy. The SOTA administration, says Cervone, “has gotten so much feedback that their curriculum is too ‘classical’.” Of course, classical and jazz instruction, along with the basics of sightreading and music theory, won’t disappear from afternoon classes, and traditional academics will prevail in the morning. But the new program will launch in the 2012-2013 school year, for which tomorrow, Feb. 10, is the application deadline.

Next month, applicants will get an overview of the program from Cervone and learn about taiko, and will then have to audition on the drums. Cervone’s instruction, which has extended to Filipino tinikling and Indonesian gamelan, is unique among school district curricula, if not elsewhere in the state and across the nation. “As the new program grows, and I get more of a budget, different artists will come in and teach Afro-Cuban drumming.

And maybe we’ll have an artist-in-residence who’s a Brazilian musician, or a [Indian] tabla player, maybe Celtic music and steel pan,” Cervone hopes. “There are a lot of students, parents, and faculty who have felt that the offerings at SOTA need to be diversified, as much as our world is diversifying, and music is changing.”

The Pied Piper of Culture 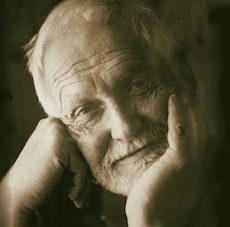 After a fabulous multi-disciplinary career covering more than three decades, which included integrating film into live opera performance, Ronald Chase found himself in 1993 volunteering at San Francisco’s School of the Arts, conducting theater auditions and putting in gardens. “So I’m out there hoeing, and a kid came out, and I said, ‘What do you do all day?’,” the 77-year-old Chase relates. “And he told me what I considered to be a completely tragic story: ‘I get up, go to school, have lunch, go back to school, come home, look at television, do my homework, and go to bed’.”

Determined to deter the tragedy, Chase approached the school’s principal and got permission to take some kids out to galleries and a movie on the weekend. Over the next several years, his sustained effort became the Art & Film Program for Teenagers, growing in participant size from 18 to several hundred, and attracting funding from the National Endowment for the Arts, the Kaplan Fund, and private donors. Youth from nearly two hundred middle schools, high schools, and colleges now convene, sometimes accompanied by parents, for free admission to operatic, symphonic, chamber, and theatrical performances, as well as to art, film, and museums, sometimes taking in a meal.

Events are promoted by e-mail and on Facebook, despite Chase’s skepticism about social media. “What we’re battling is complete absorption with trivia and distraction,” he laments. “Kids don’t have that many outlets to satisfy their intellectual life.” For a fascinating look at a successful outlet, click on chaseartfilm.com.