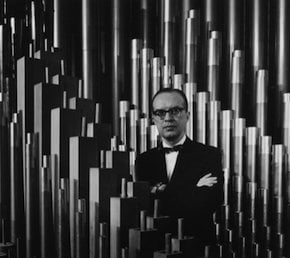 "Lawrence Moe or Larry as he was universally known," says friend and former UC Berkeley colleague (and SFCV Founder) Robert Commanday, "was a devoted advocate of public school music education and worked closely with the University's School of Education.

"When he was department chairman, he helped realize Michael Senturia's plan to create the Young Musicians Program. He also conducted, the University Choir for a time, and once, a production of a 17th-century opera, but as a performer he was most effective at the organ console."

In fact, Moe, who died on Sept. 14, in Oakland, at age 96, was best known as the UC Berkeley Organist, from 1957 to his retirement in 1987. Since then he carried the title University Organist Emeritus.

He was an organist from age 15 on, and after obtaining degrees from Northwestern and Harvard, he was on the faculty of Wellesley College, while the organist and choirmaster at St. Paul's Episcopal Cathedral in Boston.

At Berkeley, he was a Professor of Musicology and University Organist from 1957 when Hertz Hall was completed, with its Holtkamp organ. He was chairman of the department for 10 years, and received many awards during his lifetime, including Fulbright awards to study in Europe, the Berkeley Citation for "Distinguished Achievement and Notable Service to the University", and a Distinguished Teaching Award. In 2007, the organ gallery of Hertz Hall was named in his honor.

He is survived by his wife of 67 years, Georgiana, son Eric, daughter Charis Burke (Alex) and two grandchildren, Dillon Moreno and Brigitte Moreno. At his request, no services will be held.