San Francisco Performances' much anticipated, soldout recital by Yuja Wang on Thursday was canceled because of the pianist's painful arm condition. Her doctor ordered at least a week's rest.

She has also canceled her Orange County recital, as reported by Tim Mangan.

In a disappointed, whimsical mode, one wonders if Martha Argerich may be available to substitute. Yuja's career took off when she appeared for the frequently canceling Argerich. Until now, even while giving up to 100 concerts a year, Yuja kept her engagements.

But no, the unfunny reality is that the Thursday event is canceled. The concert is rescheduled for June 20, 7 p.m. at Herbst Theatre. As of now, her June 17-19 appearances with the San Francisco Symphony are still scheduled.

Not even the late San Francisco Opera General Director Kurt Herbert Adler who created Merola could have imagined that 53 years into the future the young artist development program named for his predecessor will be alive and well, still launching or promoting hundreds of careers worldwide. 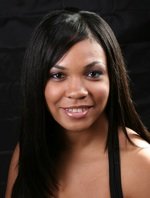 Of the 650 applicants auditioning for this summer's Merola Opera Program, 25 were selected, including Eleazar Rodriguez participating for the second year. Here they are:

The schedule, below, of public Merola performances was trimmed back from two staged productions in previous years to one because of ongoing budget problems: 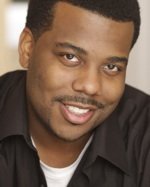 2010 Merola sponsors include the Grace A. Diem & Alice E. Siemons Fund, the Frances K. and Charles D. Field Foundation, the National Endowment for the Arts, and the Bernard Osher Foundation.

That would be the Schleswig-Holstein Festival Orchestra, appearing at Davies Symphony Hall on Monday night in its last (23rd) stop of its first tour of the U.S. Do those names indicate a location in Asia? No, Schleswig-Holstein is north of Hamburg. Approximately one third of the musicians are Asian (and two-thirds female, but that's another story).

Davies was full, and the audience had an unusually high Asian-American quotient. Because of the lure of Schleswig-Holstein? No, the attraction was Lang Lang, getting a rock star's reception.

He also played like one, once again justifying Yuja Wang's kind and exact characterization: "he is like Elvis ..."

A big star, who fills halls, inspires children, and has brilliant technique ... and is self-indulgent, flashy, a performer-above-composer. For Rachmaninov or Prokofiev, it's OK, but Lang Lang performed the Mozart Piano Concerto No. 17 (and the Beethoven First), with exaggerated rubato — as if playing Liszt — and ritardando reminiscent of lounge pianists.

But there was good news too, very good news. The Schleswig-Holstein Festival Orchestra is brilliant, near equal to the best youth/training orchestra, the Gustav Mahler Jugendorchester. The SHFO was created by Leonard Bernstein in 1987 as the first of its kind in Europe. The musicians are all under 26, selected from over a thousand applicants in auditions held in 30 cities. 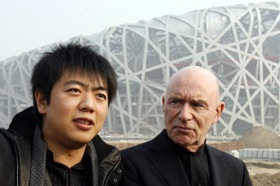 Conducted by Christoph Eschenbach (a personal favorite, often maligned by others), the orchestra was wonderful in the two concertos and Prokofiev's Symphony No. 1, but what floored me was the opening Beethoven Leonore Overture No. 3.

Playing as one and with palpable passion, the young musicians dazzled in Eschenbach's daringly slow, affecting opening, and rock-solid consistency throughout this most transparent and familiar work. I wish the standing ovation were to follow this performance, rather than — inevitably — Lang Lang's.

After the period of $140 per barrel oil prices, huge snow storms, it's now volcanic ash that plagues airlines 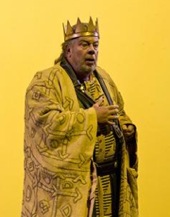 and travelers — it's a trying time for jet-setter musicians.

Returning to the item above, this being the last stop on the tour for Schleswig-Holstein, what will the orchestra do to return to Northern Germany? Good luck to them!

There are many accounts of musicians' travel problems, such as this in The New York Times

The havoc affected the famous and the little known alike. The young Finnish pianist Juho Pohjonen, who was due to leave Helsinki, Finland, for a recital on Sunday in Vancouver, British Columbia, could not depart, and the more prominent Leif Ove Andsnes, who had an engagement to play Rachmaninov’s Piano Concerto No. 4 with the Barcelona Symphony Orchestra on Saturday and Sunday, was stuck in Norway ...

[Andsnes' management] was able to send one of its clients as a substitute for Mr. Andsnes: Nikolai Demidenko, who happens to have the concerto in his fingers. Mr. Demidenko managed to buy a now priceless ticket on the Eurostar but had to stand from London to Paris, and was making the 10-hour drive to Barcelona. "We’re really pleased that’s working out," [said the agency representative].

I wonder how pleased Demidenko was standing from London to Paris, but my favorite is a report from a friend at the Berlin Staatsoper:

We were lucky with the Salome cast: Jochanaan took the ferry and car from England, Narraboth traveled from St. Petersburg to Budapest, took an overnight bus to Munich and boarded the train ...

The punch line: Narraboth dies on the stage about 15 minutes into the opera. Then it's the train to Munich, bus to Budapest, another train to St. Petersburg. Hardy folks, these opera singers.

Then there is a Luisa Miller in Zürich, requiring the transport of Matti Salminen from Cologne. The solution was a train ticket, although — writes a chorus member from Zürich:

... it was tricky (every train in Europe is packed so full, I think many cars have people lying on the roof), but Matti was cool. "I am sure that I will find a seat," he said grandly. And indeed he did.

Well, come to think of it, it probably wasn't that hard. Imagine sitting in a train, and Matti Salminen (a rough estimation — seven feet tall and four feet wide) comes down the aisle, leaning heavily on an elegant cane, and says, "I would like to have this seat, if you don't mind." 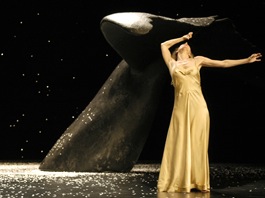 A strange, unforgettable realization of Bartók's Bluebeard's Castle is among the works of the late German choreographer Pina Bausch to be shown next month at the Yerba Buena Center for the Arts.

To the Limit: Pina Bausch on Film is a defining collection of video of and about Bausch's work, including the U.S. premiere of Dancing Dreams, screened to acclaim at this year's Berlin Film Festival.

Bausch, who died last year, had created pieces full of intense emotion, blurring the lines between theater and dance. She had worked with Federico Fellini, Pedro Almodóvar (who can forget the stunning opening of Talk to Her?), Chantal Akerman, José Limón, and Paul Taylor on films and dances.

Solo Is No Longer Singular

For a couple of hundred years now, soloists appeared on the concert stage, performed in a piano or violin concerto, took bows, maybe gave an encore, and left. (There are a few true music lovers among them, who actually stay for the rest of the concert.)

Times are changing, soloists are being maximized, raising the question of compensation for double duty. On Sunday, the ever-surprising Gil Shaham played both the Stravinsky Violin Concerto and the Mozart Violin Concerto No. 2 (with the St. Louis Symphony and David Robertson conducting), and on Monday, Lang Lang was the soloist in concertos by Mozart and Beethoven (and providing a variety of encores).

To trump them all, Yuja Wang will perform in three pieces when appearing with the San Francisco Symphony on June 17-19: Poulenc's Sonata for Piano Four Hands (with MTT), the Stravinsky Capriccio for Piano and Orchestra, and Ravel's Piano Concerto for the Left Hand.

While there is clearly no burning need for yet another Butterfly, Festival Opera at least is marshalling youngish, interesting casts. The Puccini will feature Teresa Eickel in the title role, Christopher Bengochea as Pinkerton, and Nicole Takesono as Suzuki. Also featured are Bojan Knezevic, John Bischoff, Andrew Whitfield, and Kurt Krikorian. Brian Staufenbiel is stage director; Joseph Marcheso makes his conducting debut in Walnut Creek.

Angela Cadelago will be the Lucia, with Thomas Glenn as Edgardo, Brian Leerhuber as Enrico, and Kirk Eichelberger as Raimondo. Festival Opera Music Director Michael Morgan conducts, while Mark Foehringer is stage director.