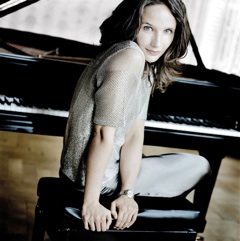 the collaboration of a world-famous French pianist and a rapidly emerging young Ukrainian conductor making his debut.

Kirill Karabits conducts the local premiere of Elegie, by his countryman Valentin Silvestrov; Rachmaninov's 1940 Symphonic Dances; and Robert Schumann's 1845 Piano Concerto in A Minor, with Hélène Grimaud as soloist.

Silvestrov composes music that's both neoclassical in structure and postmodern in style. He has said that he is not writing "new music ... My music is a response to and an echo of what already exists."

Grimaud, a San Francisco favorite, is on a world tour, stopping in The City, New York, and Philadelphia, after giving concerts in European capitals. Next: Beijing, Tokyo, and Toronto.

Born in Aix-en-Provence, in 1969, Grimaud has been in the first rank of pianists for the past two decades, well-represented by Deutsche Grammophon audio and video recordings in addition to her concert appearances. She is especially known for performances of romantic and virtuoso works.

Grimaud's performances of the Schumann, one of the grand, complex, and rewarding romantic piano concertos, have been greeted by critics’ ranking her with such giants of the keyboard as Martha Argerich, 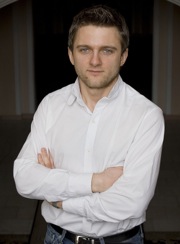 Symphonic Dances, Rachmaninov's last work, is a veritable digest of the composer's output, including sounds of — and outright quotes from — his first and third symphonies, along with Russian church music and his own Vespers.

The dominant theme of the medieval chant Dies Irae in the work reflects both Rachmaninov's thoughts of death, just three years before the end of his life, and his anger and sorrow over being exiled from Russia.

Kiev-born Karabits, who turned 34 this week, is the son of the late conductor-composer Ivan Fedorovich Karabyts (who used a different transliteration from Cyrillic).

Making his first conducting appearance at 19, Karabits studied in Vienna and Stuttgart and became assistant conductor of the Budapest Festival Orchestra three years later. He is now principal conductor of the Bournemouth Symphony, succeeding Marin Alsop.

The career-making event of winning that post was dramatic, verging on the comic. When Karabits was invited to audition, he had to return quickly from Brazil to England, and on top of jet lag, he was also struck by a peanut allergy, and then ear plugs on the plane came loose and stuck in his ear. His first stop on arrival: a hospital; the second: the audition, and winning the post.

Stephen Paulson's Symphony Parnassus will present the music director's own Bassoon Concerto, which he

performed 43 years ago with Walter Hendl and the Eastman-Rochester Orchestra, and later, in 1973, with William Steinberg conducting the Pittsburgh Symphony.

"I'm so happy," says Paulson, "that my friend and colleague Steve Dibner will be doing all the hard work as bassoon soloist this time around." Paulson describes the three-movement concerto as a work that "evolves from burlesque-like atonality to post-Romantic harmony."

The Jan. 16 concert, at the S.F. Conservatory of Music, is also offering an even less frequently performed work, Mozart's Violin Concerto in D Major, K. 271a, known as the "Seventh," with Victor Romasevich as the soloist.

"Seventh"? "The way I understand it," Paulson says, "is that, after the five well-known violin concerti of Mozart's, there was one claimed to be the sixth, which turned out to be a fake, then this one which, although questioned, is now believed to be genuine. It still retains its No. 7 designation."

The concert opens with the overture to Mozart's Marriage of Figaro and concludes with Strauss' Till Eulenspiegel.

Outstanding Freebies from the Conservatory

Always a magnet for audiences, the San Francisco Conservatory of Music is outdoing itself this month with not-to-be-missed free master classes and recitals. Just a sample:

- Countertenor David Daniels, in town for Philharmonia Baroque concerts, in a master class on the art of Baroque singing, 7:30 p.m., Jan. 19, in the Caroline H. Hume Concert Hall

After Many Nutcrackers, Ballet Takes on the Season

Few ballet companies, however big, schedule more than one or two full-length works per season. Mostly, 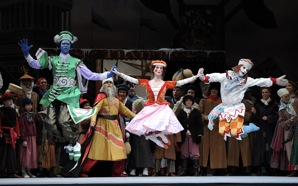 they present repertories of dance pieces usually running between 20 and 30 minutes.

With elaborate sets and costumes, not to mention large casts, the evening-long works are more difficult and expensive to produce — thus being what opera is to chamber music.

Balanchine's 1974 Coppélia is a San Francisco Ballet premiere, of special significance to Tomasson, who 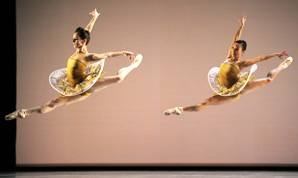 danced in the original New York City Ballet production. It is presented in collaboration with Pacific Northwest Ballet.

Little Mermaid, by contrast, is Neumeier's modernistic take on the Hans Christian Andersen story about unrequited love, with music by Lera Auerbach; scenic design, lighting design, and costumes are all by the choreographer.

The rest of the season is taken up by six mixed bills: three works per program, including important premieres.

Company premieres include Kenneth MacMillan's Winter Dreams on Program 4, and Wayne McGregor's Chroma on Program 6. MacMillan's work is set on music by Tchaikovsky, as are the other two works in that program: the premiere of Tomasson's Trio and the great classic of Balanchine's Theme and Variations.

With the beginning of 2011, three dancers are being promoted to soloists: Courtney Elizabeth, Daniel Deivison-Oliveira, and Isaac Hernández.

Principal character dancers are those rare creatures in ballet, combining excellence with longevity in a profession that sometimes chews people up in months, not years. The S.F. Ballet has four: Ricardo Bustamante (who joined the company in 1980), Val Caniparoli (1973), Jorge Esquivel (who started his career with National Ballet of Cuba in 1968 and joined SFB in 1993), and Anita Paciotti (1968). Long may they thrive.

Of Terri Gross' numerous great interviews on NPR with Stephen Sondheim, the best — from April 2000 — was rebroadcast over the weekend on KQED-FM. 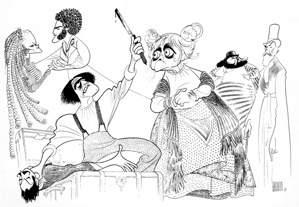 hummable," Terri asked what that was about. Sondheim replied that it's repetition that makes it possible for the listener to hear the music.

As an example — bless his heart — he brought up the Berg Violin Concerto, saying that, on first hearing, "It was just noise." Yes, my experience too and if you got it instantly, good for you). After listening to the concerto several times, Sondheim said, he started humming it.

Without shame, I admit to having had a similar experience with Elektra, notwithstanding the fact that it was in Vienna, with Boehm and Nilsson. "Just noise," thought I. Now, of course, I not only hum it, I sing it full out, especially the orchestral parts.

One of the highlights of the interview is Sondheim's explanation for the optional endings of Epiphany in his musical Sweeney Todd.

The chords at the end of the song are extremely dissonant, particularly when Todd sings the last line, "I'm alive at last / And I'm full of joy!" Sondheim says he wrote the music to mimic the madness that's taking place in Sweeney's head — and that he originally resisted writing a conclusion that would move an audience to applaud:

In fact, I had it end on a sort of dissonant chord with kind of violent harmonics — meaning very high, shrill sounds. And Hal Prince said, "Len Cariou has worked so hard while he sings that song. You have to give him a hand."

So I put a big chord on the end, and that big chord still strikes me as wrong. So even in the printed copy — that is, the piano/vocal score that's published — I put two endings in. Those who want to give it a big nice consonant chord at the end and get a hand from the audience — and those who do what I wanted to do, which was to let the thing dribble out into the next scene."

Incidentally, I am still waiting for the day when Sondheim’s Passion becomes part of the average operatic repertoire. It's a great, "hummable" opera, requires a small cast, and can be presented on a double bill, though it runs almost two hours. So pair it with Bluebeard? Violanta? Le Rossignol? A Flowering Tree? Goyescas? The possibilities are endless.
Back to top

'Dutch Predictor of Know-Nothing Politics' Impact on the Arts

"Dutch Right-Wing Pressure Devastates Arts" is the headline of a startling news report by Stanley Pignal in The Financial Times.

The rise of nationalistic politicians on the scene in the Netherlands has already resulted in a nearly $400 million cut in subsidies for performing arts, equivalent to a third of annual state support.

Although all parts of the Dutch budget are being trimmed in an austerity drive, "the sheer scale of the cuts being imposed on arts and culture has prompted observers to wonder to what extent this is belt-tightening, and to what extent it is an ideological assault driven by the new populist faction in parliament," says the report.

The leading Freedom Party figure, Geert Wilders, is known to dismiss arts and culture as "leftist hobbies," and "there's a feeling in the Netherlands that cutting spending there is a form of revenge by the ordinary man on the cultural elite."

Wilders’ Freedom Party is not formally part of the government, yet the minority center-right coalition, led by Prime Minister Mark Rutte, relies on its support for its parliamentary majority.

"The cost of that support," says the article, "was confined to a hardline policy on migration. But the slashing of the arts and culture budget points to a wider Freedom Party agenda beyond the anti-immigration theme it is best known for."

Tavis Smiley's hour-long program Dudamel: Conducting a Life deals with the rise of Venezuela's El Sistema, widely promoted by Gustavo Dudamel, now the Los Angeles Philharmonic’s music director, which helped him and thousands of others find a life in music.

Smiley follows the original method by José Antonio Abreau through its many implementations around the world, including the U.S., from the Los Angeles Youth Orchestra to Abreu Fellows at Boston's New England Conservatory.

A recording of an all-Mozart program, conducted by Nicholas McGegan at Herbst Theatre on Sept. 24 and featuring pianist Robert Levin, was broadcast last night, and it will be available for the rest of the week on BBC Radio 3.

Petroc Trelawny introduces the concert by "one of America's finest period instrument ensembles." The program opens with incidental music written for the play Thamos, King of Egypt, one of the composer's early forays into music for the theater. Levin joins the orchestra for the Piano Concerto in D Minor, and also plays the concerto movement only recently attributed to the 7-year-old Mozart. The program concludes with Mozart's Symphony No. 41.