Just back at work for the first time in the new year, San Francisco Opera General Director David Gockley has announced plans for the company's 2010-2011 season, its 88th. 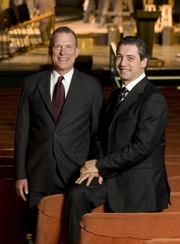 Back at work after extended holidays? No, Gockley says, after the Christmas break came a week of unpaid furlough he had ordered for everyone, including himself. The times, they are tough.

Not so for Plácido Domingo: no furlough, no vacation, no lack of pay. The super-busy superstar, who turns officially 69 in two days (Jan. 21), has been a tenor great for an incredible half century. This month, he conducts one Verdi opera at the Metropolitan (Stiffelio) and sings the (baritone) title role of another (Simon Boccanegra) — although not at the same time.

He is also general director of both the Washington National Opera and the Los Angeles Opera — in his spare time, and rather sparingly at that, according to some in those companies. 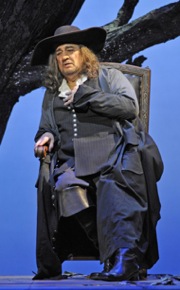 Proving that he does not intend to slow down, Domingo has signed on with the San Francisco Opera — where he first sang in a staged production in 1969 (La bohème) and last in 1994 (Hérodiade) — to appear in the title role of the local premiere of Franco Alfano's 1936 Cyrano de Bergerac next fall.

Domingo's appearance and the scheduling of the rarely performed opera by the composer who completed Puccini's Turandot is a highlight of the season announcement. How difficult was it to sign Domingo on?

"Actually, he suggested it, several years ago, wanting to sing in San Francisco, probably for the last time," Gockley says, "He gave me a choice between Tamerlano and Cyrano. Given the fact that he was singing the Handel in L.A., I thought Cyrano may be more interesting for us." 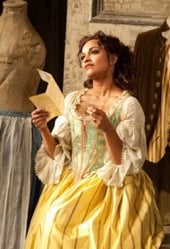 Given the continued fiscal constraints, it's understandable that the fall portion of the next season is being cut back to six productions. The current operating budget is reduced to $63 million from the previously planned $69 million, still including a projected $3.2 million deficit.

And yet, there are casts rich in talent and renown, and in a heroic gesture, the season will close in the summer of 2011 with the four works of Richard Wagner's Der Ring des Nibelungen, the mightiest — and most expensive — of productions in all opera (June 14-July 3). See next item.

How Much Gold in the Rhein? 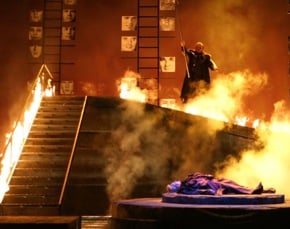 That's considerably below the Los Angeles Ring budget of $32 million, but significantly above Seattle Opera's $16 million for the 2001 production — not to mention the planned 1988 Seattle Ring, canceled because its cost was estimated at $1.3 million, or the initial production, in 1975, priced at $125,000. And it looked like it too, although I dearly loved it).

Considering the drawing power of the Ring, is it possible to turn it profitable? Not likely, according to these rough figures and fanciful speculation:

If you multiply 26 performances of the current production (see below) at the War Memorial Opera House and stipulate 3,000 tickets sold each performance at the average price of $178, the income is $13.8 million. Add a generous $2 million in contributions requested for the purchase of prime seating, and it's still not near $22 million. So it's all — or mostly — for love and glory.

This is the count for the San Francisco Ring performances: Before the three complete cycles in 2011 (that's 12 operas), there were the six "stand-alone" Rheingolds two years ago, there will be six Walküres this summer, and one each of Siegfried and Götterdämmerung next summer just before the cycles.

The San Francisco Boys Chorus, in partnership with the Diocese of Oakland and the Cathedral of Christ the Light in Oakland, will present a Haiti Earthquake Relief Concert on Sunday, Jan. 24, at 5 p.m., in the cathedral. (See concert details.)

Tickets to the benefit concert are available for a suggested donation of $25 online at or at the door on the day of the concert. All proceeds go to the Catholic Relief Services Haiti Response Fund (CRS). CRS has already committed to an initial $5 million emergency response, and its 300 staff in Haiti are involved in immediate relief activities. 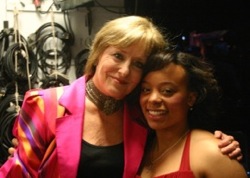 Performing with Flicka was YMP alumna soprano Nicole Rodriguez, accompanied by YMP faculty member Jim Meredith. The opera star and contributor to countless benefits also spoke about how YMP is changing lives and giving talented young musicians the skills to go to college and succeed in life. Chanticleer also performed on the broadcast.

Otmar Suitner, music director of the Berlin Staatsoper from 1971 to 1990, died on Jan. 8, at age 87. He held many other positions in Austria and Germany, including directorship of the Dresden State Opera and State Orchestra.

During the Kurt Herbert Adler era in San Francisco, Suitner was a frequent visitor to the War Memorial, conducting mostly Wagner, from 1969 performances of Götterdämmerung to the 1981 Die Walküre.

Suitner "was a conductor who pleased San Francisco audiences and press very much and didn't have the same success in other theaters," Adler — no shrinking violet — once said. "But here he really did a wonderful job. I remember when a colleague asked me 'How did you make a conductor out of Suitner?'

"I said, 'It is not how you make a conductor out of someone. He is a conductor. But to bring out the artistic talent is the duty and the skill of an opera director. When you are able to bring the best out, you develop also a friendship with the artist. And then they will go through thick and thin for you."

For more than a decade now, this column has been striving to be inclusive, and in that vein, here's news of "more cool music than you can shake a stick at." San Francisco IndieFest and Talking House present the Winter Music Fest, Jan. 29 through Feb. 4 in several locations, including The Bottom of the Hill, Thee Parkside, and The DNA Lounge.

George Jellinek, who died at age 90 on Saturday, was the Hungarian-born host of The Vocal Scene, the weekly syndicated radio feature emanating from WQXR of New York City. Over three decades, from 1969 to 2004, he talked comfortably with opera singers and other figures of classical music, or presented comparative recordings of arias and excerpts.

He was also familiar from his intermission appearances on Metropolitan Opera radio broadcasts. Jellinek retired from The Vocal Scene with the broadcast of Dec. 23, 2004.

The program can still be heard on several stations, among them WQXR in New York City, WFMT in Chicago, and on XM Satellite Radio's VOX channel. 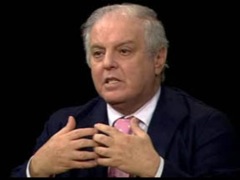 ROSE: This is a moment of candor for you. Are there any appointments that you wanted you didn’t get?

BARENBOIM: Well, I very much wanted the ... to be the principal conductor of the Berlin Philharmonic. In 1999, I think it was, that they voted. I wanted it because I felt that the orchestra was changing direction. And I was not very happy about the direction that they were going in. And I had been a fervent admirer of the orchestra for many, many years. And I wanted to be their conductor because I thought I could give them back a lot of what I had learned from them. [Simon Rattle was the orchestra's choice; he has been principal conductor since, having recently been renewed through 2018.]

ROSE: Well, what then?

BARENBOIM: It was in New York City, many, many, many years ago. Leon Fleisher, who I admired tremendously, great musician. I was going to go and hear him play a recital at Hunter College.

And they called me up and said Leon Fleisher is unwell. He has some shoulder problem. Would you replace him tomorrow? In fact, that was the first time that he didn’t play [at the beginning of his focal dystonia, which incapacitated one hand for years].

I said yes. I was so young and I was not in good shape. I had not practiced because there was no reason for me to play. But I wanted to play this concert. And I go to Hunter College, quite nervous because I, you know, I couldn’t prepare for it.

ROSE: But it was OK.