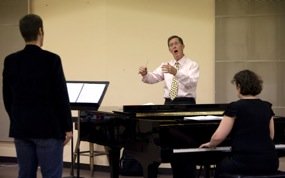 The San Francisco Opera Merola Program's 53rd season will offer — besides 10 weeks of intensive training for 25 young selected participants — a program of public performances, some low-cost, some free. As part of the Opera's economy measures, there are fewer programs than in recent years, and only one staged opera, instead of the usual two.

There will be four performances of Donizetti's The Elixir of Love at Fort Mason's Cowell Theater, Aug. 5-8. The Schwabacher Summer Concert will take place on July 16 at Herbst Theatre, and be repeated in a free outdoor concert at Yerba Buena Gardens, on July 25. The season concludes with the Merola Grand Finale onstage at the War Memorial Opera House on Aug. 21.

For the fourth year in a row, the Merola Opera Program offers a special gift to the community at 2 p.m. on July 25 with a free performance of the Schwabacher Summer Concert at Yerba Buena Gardens.

Bach, Haydn, and Reger ... how do you figure them in to the Armenian connection, following the Oakland East Bay Symphony concert last week dedicated to the music of the land of Hayk (and Mozart, too)? 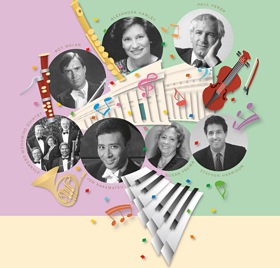 You don't need to work six degrees of separation, just two will do: This is the 25th season of the Avedis Chamber Music Series, founded in 1985 by flutist Alexandra Hawley. "Avedis" means "good news" in Armenian, the group named in honor of Hawley's former duo partner, Robert Avedis Hagopian (1945-1984).

As in the past years, the series presents a judicious mix of classics and rarely performed 20th-century works, such as those by Joseph Jongen, Theodor Blumer, and Jean-Michel Damase.

Here's the schedule of the 2 p.m. Saturday concerts at the Florence Gould Theater in the Legion of Honor: 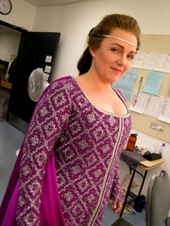 For Valentine's Day, David Sloss' Fremont Opera presents, and this is a fact, Romance in Opera — and Why It Never Lasts ....

Just think about it: Other than in comic operas, are there any happy endings? Do Gilda, Isolde, Juliet, Brünnhilde, et al. grow old gracefully?

Making her debut in Fremont, to sing yearning and sad arias and duets, is soprano Marie Plette, along with tenor Christopher Bengochea, and Simona Snitkovskaya accompanying on piano. Sloss will provide narration and context.

As far as pure love is concerned, the $35 admission (which includes food and drink in a table-seating setting) will all go to benefit Fremont Opera, whose romance with music lovers is likely to have a happy ending ... no, continuity.

A Domingo Boccanegra on HD

The next high-definition live transmission from the Metropolitan Opera is due on Saturday at 10 a.m. PST in many local movie theaters.

It will be the much-talked-about production of Verdi's Simon Boccanegra, with tenor Plácido Domingo taking the baritone title role. 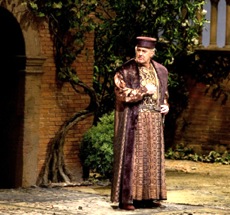 Adrianne Pieczonka, Marcello Giordani, and James Morris are his co-stars.

The feat may not be quite as surprising as it appears. Domingo never really was a pirate of the high C’s, and in recent years his reduced range has become bottom-heavy. Late performances of Otello and Andrea Chenier found him adopting downward transpositions that virtually placed him in baritone territory, and he long ago recorded the relatively low-toned Figaro in Il barbiere di Siviglia.

Domingo left no doubt on this occasion that he commands all the required notes, not to mention ample stamina and amazing freshness. Boccanegra’s tessitura does not faze him and he has no apparent trouble keeping a tremolo at bay.

A Prokofiev for Our Time?

Were it not for an NPR program on Sunday, I would not have known about Prokofiev's Concerto for Turntables and Orchestra.

No, it's not Sergei, but his grandson, Gabriel. He teamed up with DJ Beni G and the Royal Scottish National Orchestra for an evening and recording of classical music and hip-hop. Beni G., a founding member of the Mixologists DJ crew, had a "musical dialogue" with the orchestra, creating his scratches and breaks from prerecorded orchestral samples, with the full orchestra supporting him.

Also on the program: New York composer Todd Levin's Blur, described as "an eight-minute fusion of orchestral and techno influences," and the ballet score Iron Foundry by Alexander Mossolov, which dates back to 1928.

Nelson Freire, who was to be the soloist on both evenings of the Leipzig Gewandhaus performances under the baton of Riccardo Chailly at Davies Symphony Hall, Feb. 21-22, is ill. He will be replaced by Louis Lortie.

Chailly will return to San Francisco for the first time since he conducted Turandot for the San Francisco Opera in 1977, with Luciano Pavarotti and Montserrat Caballé making their debut here in the Jean-Pierre Ponelle production. 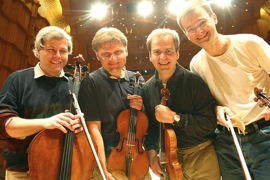 Probably the wrong gender in the capricious German, the headline is a play on the title of the Korngold opera Das Wunder der Heliane (The Miracle of Heliane). Forget German grammar, the point is that Erich Korngold (1897-1957) is a weakness of mine.

Ultraromantic, sugar-sweet, call it what you will, every time I encounter a Korngold opera — such as the recent San Francisco production of Die tote stadt — or a ballet (The Snowman), or film score (The Sea Hawk, Kings Row), or his Violin Concerto — I like, I really like.

Now is it's time for Korngold's chamber music. I have caught pieces at an occasional festival performance here and there in the past, but now there is a new collection to have and hold.

The Aron (which maintains the German spelling of quartet) consists of four Viennese musicians: Ludwig Müller, Barna Kobori, Georg Hamann, and Christophe Pantillon. They have studied with members of the Alban Berg Quartet, and made an acclaimed debut in 1998.

Sigfridsson is a Finnish pianist, who has made many concert appearances in Germany, Hungary, Switzerland, and Austria; he won the Beethoven Competition in Bonn in 2005.

The string quartets are separated by more than two decades: No. 1 in A Major, Op. 16, was composed in 1923, the year of Heliane and the Concerto for Piano Left Hand for Paul Wittgenstein; and No. 3 in D Major, Op. 34, was first performed in 1946, when Korngold stopped writing music for Hollywood.

Korngold composed No. 2 in E-flat Major, Op. 26, in 1933, just before Max Reinhardt asked him to come to Hollywood to adapt the Mendelssohn score for his landmark A Midsummer Night's Dream film.

So, the four pieces in this two-CD album pretty much cover Korngold's career, they are wildly different, and yet the same in rich melodies, exciting rhythms, great music. Give it a try.

They Came to Play, the documentary about the 2007 Van Cliburn Amateur Competition, is still in movie houses, while the Cliburn YouTube Contest drew 58 submissions in 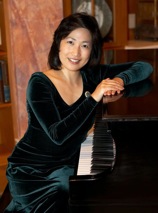 quest of a spot on the next, sixth Amateur Competition, to be held in Fort Worth next year.

The YouTube competitors included a physicist, a hypnotherapist, a meteorologist, many doctors and computer programmers and one Formula One race car designer.

The winner, chosen by a popular vote of 85,000 site visitors, is ChooHooi Khoo, also known as Janice, a physical therapist from Bakersfield, born in Malaysia.

Watch her performance of the Schubert Impromptu, Op. 90, No. 4.

The next Stanford Lively Arts "Sundays with the St. Lawrence" concert on Jan. 31, in Dinkelspiel Auditorium, will feature the West Coast premiere of Sirocco Dust, a new string quartet by Argentinean composer Ezequiel Viñao. It was commissioned by Lively Arts and the Library of Congress. 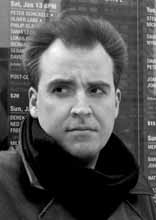 Viñao is known to Bay Area audiences through performances of his music by Chanticleer. In describing his new quartet, the composer says:

Seamen tell us of red fogs which they sometimes encounter in parts of the Mediterranean Sea, which are called "Sirocco Dust." A curious fact is that the dust is also found to consist of some particles whose habitat is not Africa, but South America, the result of a perpetual current of air that flows from southwest to northeast.

Just like these red fogs, my quartet carries particles of varied sources: Tango, Flamenco, Qawwali (the devotional music of the Sufis), rhythms associated with devotional drums such as the Batá and the Darbouka, and of course elements of Western Classical music too.

Last week, Music News had an item about the Cleveland Orchestra going on strike, but the item was pulled when the musicians reached agreement with the administration within 24 hours. Still, budget problems persist around the country: The orchestra in Seattle has a strike authorization in place, although no date set, Detroit and Minneapolis are very much in the red, and so on.

The Cleveland musicians had proposed a wage freeze, but management demanded a 5 percent pay cut this year, to be followed by a restoration of the current level next year and a 2.5 percent increase the year after that. Cleveland has been operating at an annual deficit of about $4 million over the last several years.

Baltimore Symphony musicians took a 12.5 percent cut, Cincinnati 11 percent, and Philadelphia 10 percent. Musicians of the Atlanta Symphony agreed to cutbacks of 5 percent this year and an additional 3.8 percent in 2011.

The current economic climate remains a great challenge to all of us.

Our continuous and careful long-range forecasting allowed us to make important adjustments early on in this recession, with significant belt-tightening across the entire organization.

This long-term planning will also ensure that the SFS comes out of the current financial climate healthy and ready to celebrate its centennial season in 2011 in meaningful ways.

The orchestra's contract runs through 2012.
Back to top