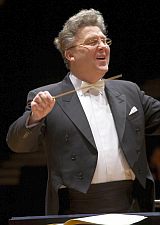 The biggest and best summer festival of classical music is in session, and available — free — to everyone with a computer. (Or, in the U.K. with a radio or TV.)

The BBC Proms present 100 concerts and many ancillary events at Royal Albert Hall and Cadogan Hall through Sept. 12. For program information, see the complete calendar. To listen, go to BBC  Radio 3.

Where but at the Proms would you find an all-British program (Moeran, Finzi, and Elgar), conducted by Vassily Sinaisky, the remarkable Russian conductor (from the Komi Republic and formerly music director of the Moscow Philharmonic)? That's on Thursday, July 23.

On July 27, "our own" Susan Graham gives a recital of French lieder (Bizet, Franck, Chabrier, Duparc, Roussel, Honegger, and many more), with the great Malcolm Martineau as her accompanist.

And so it goes. Tune in.

Musicologist and San Francisco Opera lecturer Evan Baker is a friend of this column, and he proved that by sending a kind e-mail in response to what he (again) kindly termed a "little error." Wrote Baker in response to the "A Seasoned Opera Fan?" item published here last week:

Gounod's Faust premiered in 1859 not at the Opéra, but at the Théâtre-Lyrique with spoken dialogue. In 1869, the opera made its debut in its final format (version 5) at the Théâtre Imperiale de l'Opéra (stand up and salute!), that gas-bagged title otherwise known to us mere mortals as the Opéra. The moniker "Théâtre National de l'Opéra" didn't come into being until 1870 after Napoleon III was de-emporized.

With friends like this, I don't need Wikipedia. Baker, by the way, will be lecturing in September during the San Francisco run of The Abduction From the Seraglio, or, as he is sure say: Die Entführung aus dem Serail. 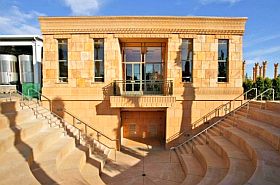 Festival del Sole brings together some remarkable artists at an impressive variety of concert venues. Besides the Napa Valley Opera House, Lincoln Theater, Carneros Inn, and Jarvis Conservatory, concerts are also given in the faux-medieval courtyard of the Castello di Amorosa, and in a representation of Persepolis that would make Las Vegas proud.

This last venue is the Darioush, one of Napa's newest and finest wineries. Only four years old, the place is outlandishly gorgeous — complete with waterfalls, a palm-tree fringed amphitheater, and brilliant skylights — and its wines are already distinguished. Darioush and Shahpar Khaledi, the proprietors from Iran, have been sponsoring a Festival del Sole event named "Evening of Persian Hospitality" for the past three years.

On Monday, the program featured a famous Iranian pianist and composer, Anoushirvan Rohani, celebrating his 70th birthday. Among his many claims to fame is that he is the composer of Tavalodar Mobarak, the Iranian version of Happy Birthday, said to be the most often performed song in the country. (Considering its function, it's a small wonder. Incidentally, do you happen to know the composer of the Happy Birthday? The answer is further below.)

As it happens, I am an avid fan of classical Persian music, in awe of the likes of Mohammad Reza Shajarian, Hossein Alizadeh, Faramarz-e Payvar, and 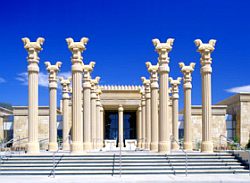 Kayhan Kalhor. Rohani's "light classical music" is not like that at all. In fact, even though it is based on Persian themes, the music heard Monday night might have passed for the sound in a piano bar pretty much anywhere in the world.

Great Western classical music and great Persian classical music are very different in everything except in their impact on the listener. "Light classical" from here or there sound alike; they entertain, are good for dancing, perhaps, but there is no real emotional, lasting impact.

Among the participating artists, a familiar face: mezzo Raeeka Shehabi-Yaghmai, a product of the San Francisco Conservatory of Music, and featured in numerous local opera productions. She was hailed for her Poppea some years back. In the winery, she and tenor Mathew Edwardsen sang Rohani's Mey-e-Naab, set to Omar Khayyam's poem about the indispensability of wine. The poem ("How can I live without wine? Cannot!") also appears on the bottles of Darioush's Darius II Cabernet Sauvignon, in a rare example of tasteful musical product placement.

The event was also an occasion for the festival and the Khaledi family to contribute thousands of dollars to the Juvenile Diabetes Research Foundation.

Plushmusic — Not What You Think

Not sure about others, but when I first heard of Plushmusic, just last week, I recoiled with expectations of the dreaded "easy listening" blight on classical 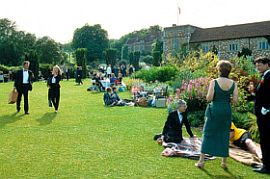 Still, I went ahead exploring, and found the very opposite of "easy listening," namely an interesting, engaging, high-quality source of music.

Started a few months back and when it was just going online officially, Plushmusic is a creation of cellist Adrian Brendel, son of pianist Alfred Brendel. In an article published Saturday, the younger Brendel is quoted about the purpose of the venture:

[It was] born out of the idea of giving musicians the opportunity to record things in a different way, and to use new technology for new projects.

"Plush" comes from the (curious) name of the Dorset village where Brendel founded a chamber music festival in 1995. At the festival and on the Web site, there is a strong emphasis on chamber music but there are also designated areas for opera, jazz, and world music.

Individual artists are given "channels," where they can post free video excerpts or charge users for a complete streaming or download of a live concert recording. Classical guitarist Zoran Dukic, for example, has posted a number of free audio clips, while Julian Steckel has made available a film of himself performing Kaija Saariaho’s short piece for solo cello Spins and Spells, and pianist Aleksandar Madzar is charging $15 for a highdefinition recording of a concert he performed at last year’s Plush festival.

There are, of course, already a number of sites that stream classical music, including Classicaltv and the Berlin Philharmonic’s own "digital concert hall." But Plushmusic is the first to conflate the roles of record label, publicist, impresario, and TV channel. As such, it hopes not only to support artists but also the wider network of arts.

Music venues and festivals, for example, are likely to benefit from links to upcoming events and a blog, which proved a powerful publicity tool at last year’s Cologne Festival, where saxophonist Hayden Chisholm and his band performed a series of jazz concerts. And they are encouraged to become media partners with Plushmusic.

A number of high-profile companies, including Glyndebourne, the Wigmore Hall and the Cheltenham Festival, have already been convinced. As Brendel explains: "The flexibility of the site means that festivals and venues, as well as artists, can use it, and to a certain degree autonomously." Glyndebourne is currently offering free clips of recent productions of Giulio Cesare and Hansel and Gretel and, for those of a sterner disposition, the entire performance of Tristan und Isolde to download for $41.

An upcoming streaming of this season’s new Falstaff production, which will be free for a limited period, highlights the win-win nature of this collaboration: the Glyndebourne name brings new users to Plushmusic and, in return, the opera house gets wide-reaching publicity ahead of their autumn tour.

David Garrett has broken the record for the most notes played on the violin in one second: an astonishing 13.

Read the story, watch the video on that site. Seeing plus hearing equals believing, but don't try to count the notes. It's just too frustrating.

Not Another Klingon Opera ...

For background, read the encyclopedia entry on this genre of Klingon music (and good luck reading white and blue on black, thank you, blind Klingon 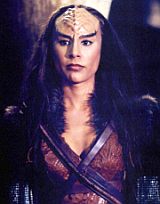 About plans for the opera u (yep, a lower-case u is all), based on the story of Kahless the Unforgettable, check the NPR report.

It all went into high gear, or at least, entered the domain of the possible, when the Watermill Foundation selected the Klingon Terran Research Ensemble for a residency last fall at the Watermill Center on Long Island.

It's the creative home of avant-garde playwright and director Robert Wilson, perhaps best known for his work with composer Philip Glass on the opera Einstein on the Beach.

You may or may not know that there is work going on translating the works of Shakespeare into Klingon. Yes, there is. Yes, they can. So why not u?