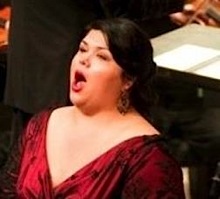 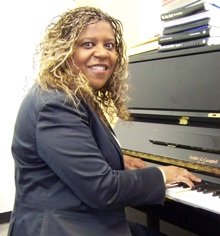 Famed jazz artist Dianthe "Dr. Dee" Spencer has been named director of the School of Music and Dance at San Francisco State University. The school is home to one of the longest-standing and most diverse performing arts programs in Northern California.

"We are excited that her faculty colleagues selected someone so well-respected in the jazz community for not only talent and hard work, but also fervent commitments to education, mentorship and social justice, says Kurt Daw, dean of S.F. State's College of Creative Arts.

Spencer joined the SFSU faculty in 1990 and founded the program in Jazz Studies. She codirects the program with saxophonist Andrew Speight and has directed the vocal jazz ensemble and Gospel Choir. She has taught classes in jazz improvisation, piano, harmony, women and jazz, and vocal jazz. Spencer also mentors jazz piano students individually.

The new director has had regular engagements at Martuni's and Catch in San Francisco. Her reviews have called her "a pianist rooted in the blues-and-groove jazz tradition of Horace Silver and Bobby Timmons, who goes about her business with brio."

This is an exciting time to rethink music and education, due to all of the advances in technology over the last 10 years. I plan to work with the faculty to build a collective vision to enable the school to continue to innovate for years to come, including in challenging economic times.

The Wilmington, Delaware, native is involved with the Stanford Jazz Workshop, Women's Audio Mission, and the Community Music Center. She is past director of the Clifford Brown/Stan Getz Fellowship Award combo for the National Foundation for the Advancement of the Arts, Grammy All-Star National High School Jazz Combo and the SFJAZZ All-Star High School Ensemble, which competed at the Essentially Ellington Competition for Jazz at Lincoln Center in 2002 and 2003.
Back to top

From the S.F. Symphony Tour 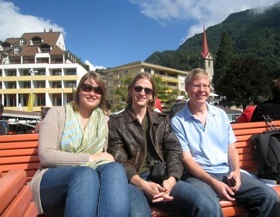 Copland's Organ Symphony and Mahler's Symphony No. 5 at the Lucerne Music Festival in Switzerland.

Among the first reviews was John Rhodes' in the online ConcertoNet.com:

There was really only one word for this concert: outstanding. From the opening bars one sensed Tilson Thomas’ absolute mastery of this music. Principal trumpet Mark Inouye impressed from his first notes, an impression he confirmed as the work progressed. The orchestra as a whole was convincing in all sections; the brass stood out as did the rhythmic and hard-hitting timpanist.

Tilson Thomas, with his extrovert and almost balletic conducting style, was urgent, spontaneous and passionate where he needed to be, lyrical and moving but not sentimental in the Adagietto ...

This was Mahler in the Bernstein style, anguished and biting wherever the music allowed. Tilson Thomas drained the last drop of emotion wherever he could. The audience was rapt throughout; at the end the cheers rang out over Lake Lucerne and way into the mountains. 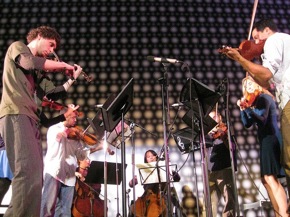 The [email protected] chamber music series opens with Classical Revolution's ensemble-in-residence on Oct. 10, continues with the Left Coast Chamber Ensemble and pianist Karen Rosenak on Nov. 14, the Bridge Chamber Virtuosi on Feb. 13, and Quartet San Francisco on May 8.

Performers in these intimate concerts speak about each work and composer, and mingle with the audience in free Meet the Artist receptions following the concerts. All concerts are held in Crowden's auditorium. General admission tickets are $15; children under 18 can attend all Crowden concerts free.

The S.F. Chamber Orchestra performs three "Meet the Orchestra" concerts during Community Music Day, and invites the public to explore music from far-away places in "Music Around the World" Martin Luther King, Jr. Day performances at 11 a.m. and noon on Jan. 17.

Executive Director Doris Fukawa announced that ongoing renovation of Crowden's largest performance hall will conclude in 2013, when it opens as the Jacqueline and Peter Hoefer Auditorium.

Sunday, on the 100 anniversary of the premiere of Mahler's Symphony No. 8, NPR's Weekend All Things Considered marked the event with program host Guy Raz interviewing Michael Tilson Thomas, who had won a Grammy for his recording of the "Symphony of a Thousand."

MTT said at first, a long time ago, he had a hard time with the work:

I began to realize the incredible depth of humanity that the piece has — how much humor, how much wit, how much parody, how much astonishing inventiveness. There are surprising illuminations of the text ... I hadn't experienced those things before.

People perceived that this piece was a major cultural event, and people were coming from all around the world to hear it.

Symphony No. 8, with its theme of divine redemption and elaborate characters and scenes. The symphony itself is equally elaborate, powerful, and emotional. Thomas says it comes close to what a Mahler opera might have sounded like had he written one in his lifetime.
Back to top

Lincoln Elementary, home to the Cantare Children's Choirs, has won the 2010-2011 National Blue Ribbon Award. It is the only school in Alameda County and one of only 300 schools nationwide (out of 90,000) selected for the recognition.

Lincoln Principal John Melvin says the school has "a long history serving the immigrant population of the Oakland Chinatown community. This Blue Ribbon Award acknowledges academic success over time and we are proud to have sustained excellence. This award is a testament to the hard work and efforts of our students, teachers, staff, and families."

Yet, the school's demographics have not proved an obstacle to remarkable levels of achievement. Fully 96 percent of Lincoln’s students rank as advanced or proficient in Math and 83 percent of students score as advanced or proficient on the English Language Arts exam. Overall, the schools Academic Percentage Index (API) is 953 on a thousand-point scale — one of the highest totals in the state.

S.F. Opera in the Park 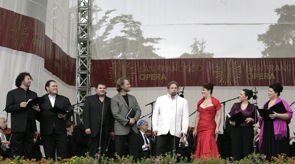 in the Park concert will be broadcast on Oct. 3, at 8 p.m., on KDFC, 102.1 FM, also available online. There you may catch up with what various opera fans and Music News readers described as:

- Musically, the Adlers just about stole the show, but there is no way to steal a show from Marco Vartogna who sang "Nemico della patria" from Andrea Chénier. "David Gockley let a kitty out of the bag saying Chenier is on the horizon."

- Dolora Zajick felled a few trees with "La luce langue" from Macbeth. "I wonder why she did so few Lady Macbeths in her career."

- Micaela Carosi sang "Vissi d'arte" from Tosca. "She gives me the impression of a soprano," says my reporter, "who was gifted with a big voice and an early bloom, but never bothered to nail down a good technique."

- Brian Jadge and Crocetto sang the Butterfly duet. "Brian sang loudly but for once it worked in that venue. Leah was gorgeous."

- Ramón Vargas, Lomelí, Marcello Giordani, and Jadge had some fun with the obligatory "O Sole Mio" as an encore. "I was thinking, we'll be telling our grandchildren that we saw Vargas and Lomelí singing on the same stage." 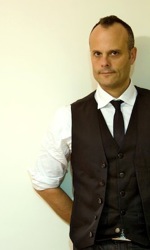 sees the problem many have with the ultra-romantic (wimpy?) character of Goethe's hero from the novel with the telling title, The Sorrows of Young Werther:

[It] can be seen just as a melodrama: boy meets girl, he can't have her because she's duty-bound, and it all ends badly. But there's more to be taken from it ... it's an opera about how we repress the things we really want to say, the actions we really want to take, and do other things instead, getting lost on the way.

In an interview with Robert Wilder Blue in the San Francisco Opera Magazine (available at Werther performances, but not online), the stage director from Barcelona takes charge of (re)shaping text and music:

When [conductor] Emmanuel Villaume and I began discussing the piece, we realized we had arrived at similar interpretations. We were finding the same things in the music and the text. I think we’re portraying what is really in the music, not what people think is there.

... we prolong the building of the story until the musical interlude between Acts 3 and 4, which is the most amazing and passionate music in the opera. This is where we situate the love story. Up to then, it’s really more of a non-love story.

The twist is that the love duet doesn't actually take place in this production. Instead, we see Charlotte, now married for a few months, remembering what happened during the previous summer when she met Werther. She rereads his letters, and falls asleep, and imagines what might have happened. When she wakes up from the dream, she realizes she is in love with Werther.

Come to see the opera and consider how Negrin's approach squares with Werther's own words in the novel:

If I sometimes invent an incident which I forget upon the next narration, [the children] remind one directly that the story was different before; so that I now endeavour to relate with exactness the same anecdote in the same monotonous tone, which never changes.

I find by this, how much an author injures his works by altering them, even though they be improved in a poetical point of view. The first impression is readily received. We are so constituted that we believe the most incredible things; and, once they are engraved upon the memory, woe to him who would endeavor to efface them.

A similar project was undertaken in the inaugural season of Berkeley Akademie, when Conductor Laureate Kent Nagano invited young musicians from Germany's top pre-professional orchestra, the Junge Deutsche Philharmonie, to perform alongside their Berkeley counterparts in the 2007-2008 season.

Celebrating his 22nd season as music director of the Young People's Symphony, David Ramadanoff conducts 104 musicians ranging in age from 11 to 20. They are residents of 28 Bay Area cities. Founded in Berkeley in 1935, YPSO is the oldest youth orchestra in California and the second oldest (after the 86-year-old Portland, Oregon, Youth Philharmonic) in the nation.

'Music Landscape' for Halloween (Yes, It's Around the Corner) 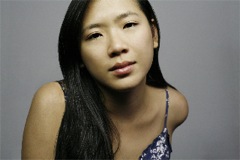 The Halloween-scary work takes place "in near darkness as the audience is drawn into the imaginative realm, blending stories of ordinary people at the edge of sanity." It will run Oct. 23 through Nov. 13 at the Brava Theater in the Mission District.

Wang, from Singapore, says "The piece channels our modern day anxieties and fear of loneliness, inexplicable lack of control, self medication and telemarketing. It is part performance art, part radio play, and part Twilight Zone on speed."