Antonín Dvořák's father served as the butcher for the family of Prince Lobkowicz in Nelahozeves Castle, just north of Prague, says [email protected] Festival co-director Wu Han. How did that come up when talking about the festival? Here are the strands of the thread:

[email protected]'s third program, of works by Haydn and Beethoven, is called "The Lobkowicz Legacy," and in conjunction with the program, Encounter II will be led by a Prince Lobkowicz, the present-day heir and trustee of the Lobkowicz family’s trove of musical manuscripts. 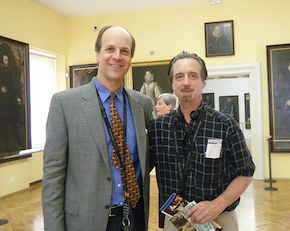 Prince William Lobkowicz-Maximilian is the seventh generation descendent of Beethoven's pal. He was born in Boston in 1961, and does not use the title, although he is recognized as such in the post-Communist Czech Republic. In 1990, Lobkowicz moved to what was then Czechoslovakia to claim his family's vast ancestral belongings, the restoration, preservation and display of which have become his profession and passion.

He reclaimed and restored several of the family's Nazi- and Communist-confiscated castles, including one wing of the vast Prague Castle on Hradčany Hill, where many of the original Mozart, Haydn, and Beethoven manuscripts are stored.

It was here that [email protected] Co-Directors Wu Han and David Finckel first met Lobkowicz several years ago. They later collaborated on music projects at the Chamber Music Society, Stony Brook University, the Juilliard School, and will do so next at [email protected] — about which much more in future columns.