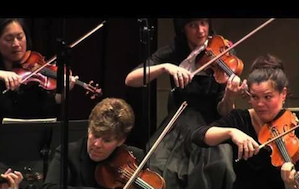 What is it like to prepare for a new season? To find out, we asked musicians of the New Century Chamber Orchestra, who will open the 2012-2013 season on Sept. 18 in the Menlo-Atherton Center for Performing Arts. Led by Nadja Salerno-Sonnenberg for the fifth year, the 19-member NCCO is embarking on its 21st season.

The concert — repeated Thursday in Berkeley, Saturday in Herbst Theatre, and Sunday in the Osher Marin JCC — will mark the Benjamin Britten centennial with performances of the Simple Symphony, and Les Illuminations, featuring soprano Melody Moore. Bartók's 1939 Divertimento is also on the program. Violinist Anna Presler says of the work:

I don't know if I'm looking forward more to the Bartók or to playing Les Illuminations again. The characters in that piece are so vivid, and the way Melody sings it is riveting, so we are all in for a treat. 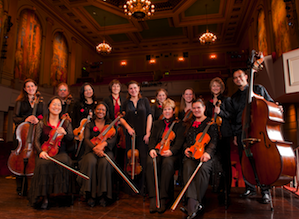 Presler, who is also the artistic director of the Left Coast Chamber Ensemble, awaits such NCCO new-music ventures as performing works by composer-in-residence Lera Auerbach later in the season: "Nadja's idea of having several commissions in one season from a contemporary composer works so well. It gives the musicians and the audience a chance to immerse themselves in a new musical dialect, and to understand one composer from different vantage points."

Violinist Jenny Douglass is proud of the "New Century sound":

This season brings a great mix of the known and unknown. Whatever repertoire we're playing, New Century puts its own stamp on it. We rehearse a lot so that each performance can be spontaneous. That's why we look at each other so much — we never know exactly where each phrase will take us, but we know that we'll stick together.

Playing with New Century is just plain fun. You are surrounded by the highest caliber musicians, playing thoughtfully programmed music, and challenged to bring your best and give your all at every moment. Our audiences feel the electricity coming from the stage, and love being a part of the experience. 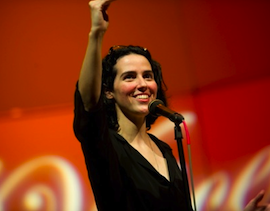 Dawn Harms, one of the busiest violinists around, will once again add chamber music to her work with the San Francisco Opera:

This first concert is exciting to me because it represents a variety of feelings. Britten especially has a way of capturing our emotions through imagination. We go from the emotionally charged Simple Symphony, to a set of lush and heartfelt ballads, ending with a complex but accessible Bartók.

The second concert is unique because all of the violins are playing at least one movement of the Vivaldi seasons. It will be really fun to play the seasons like running in a relay. It sums up the team work that is so necessary in a group like New Century. I think it is a brilliant idea, and I'm really looking forward to it.

Auerbach's Sogno di Stabat Mater for Solo Violin, Viola, Vibraphone, and String Orchestra — a reworking of the 18th-century Italian sacred work by Giovanni Pergolesi’s Stabat Mater — will be featured on NCCO concerts in December. In addition to the music of Vivaldi and Handel, those concerts will also offer Clarice Assad’s Suite for Lower Strings, based on themes of Bach.