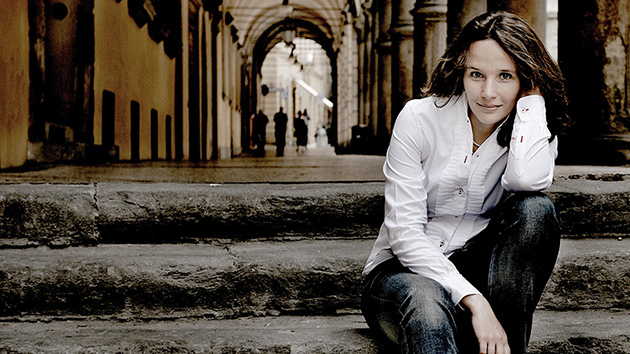 “Formidable” is one of those words that sounds better in French. But either way — tossed off in the best Parisian slang (à la our own ubiquitous “awesome”) or given the gravitas of its English usage (the actual “inspiring of awe”), formidable is an excellent word to describe the French pianist Hélène Grimaud.

Grimaud is a fearless musician who inhabits even the most familiar repertoire with an unapologetically personal, deeply intuitive, sometimes impulsive presence. And her fearlessness extends to her unconventional life, in which she is active as a writer and an environmentalist as well as a pianist. She is the author of three books; the founder of the Wolf Conservation Center in upstate New York, a crusader for social justice as a member of Musicians for Human Rights — and all of these pursuits receive an equal measure of fierce and formidable commitment.

Grimaud tours the U.S. this month on a six-city tour with the Rotterdam Philharmonic, playing the Ravel G Major and the Brahms D Minor concertos. A two-night run at Davies Hall brings both pieces to San Francisco audiences on February 15 and 16.

You first came to the U.S. in your early 20s, and it seems that you’ve found something important here: the open space for independence and individuality, self expression — the American qualities that have always appealed to freethinkers and mavericks. How has your relationship to this country shaped your personal and musical evolution over the years?

This is really the only country where I’ve ever felt a sense of belonging. This is home to me. Well, what do I know about a home anywhere, when I’m always traveling so much; but I do feel that I belong here. It’s the only country in the world where anything and everything is still possible. I have endless faith in the people there, the diversity of the people, the open-mindedness, the curiosity, the willingness to explore, to reinvent themselves, to take things with a very healthy sense of optimism. The potential for being dynamic putting energy into what one believes in, and making things happen. I find that endlessly enticing.

And it certainly has happened for me. The Wolf Center is there as the proof of it. I mean, could I have done that in Europe? Maybe. Would it have been the same? Would I have been so lucky to find so many people of incredible passion and devotion and expertise and generosity in contributing time and effort into the project to make it what it is today? Much less likely.

Your work with the Wolf Center moves me. The commitment to building something so extensive, seeing it through, gathering support and momentum around something that you really believe in … that's hard to do.

As an artist and a public person, your relationships with other human beings can be complicated, and influenced by outside expectations. You seem to be a deeply intuitive person: Is it a relief for you to experience a connection that is totally untouched by human biases and conventions?

Oh yes, but it really takes some effort, doesn’t it, to connect outside of the music world, when your time and your commitments and interactions are so much contained within this field?

Yes, and even though one thinks that the life of an artist is anything but limited, it is very limited in its own way. It’s a fairly small industry with fairly egocentric considerations, and you have to give so much time and energy to what you need to be doing and accomplishing and delivering.

Last month in New York I was able to come to Tears Become … Streams Become… an installation/ performance in which you collaborated with the artist Douglas Gordon, playing works inspired by water in an actual field of water that filled the entire Park Avenue Armory Drill Hall, which is something like 55,000 square feet. You were so physically removed, in that vast space, from the normal interaction with an audience, and at the same time the connection with the audience was so intense. It was a fascinating dynamic — a liberating experience, and, for you, another way to redefine relationships, in this case your relationship with an audience.

At the same time, the music itself, by the virtue of the fact that it’s pretty intimate repertoire, was something that required a real investment on the part of the audience. You know, the big showpieces of the repertoire will tend to come touch you in your seat in the audience, regardless, but this is much more fragile and vulnerable repertoire, and as an audience member you have to be willing to make that journey, So I thought it gave a completely different relationship between audience and interpreter. I was totally amazed by how quiet the public was. I thought it was just incredible.

The intensity and commitment were extraordinary, really, on both sides.

I’d love to talk about the Brahms D Minor Concerto, which you’re bringing on this U.S. tour. I know that it’s a piece with which you connected at a very intense emotional level when you were very young.  It has so much tragedy and personal drama in it. You’ve lived with this piece and you’ve recently recorded it. How do you view it now?

I mean, this is what makes it possible to live with these pieces for decades, for lifetimes. It’s amazing that the material itself is stronger than any interpretation can be, but at the same time, it can only come to life through interpretation. That dynamic is just endlessly fascinating. So yes, you’re right, the layers. There are layers of drama and of both a personal and a universal sense of tragedy in this piece. And the texture of the layers changes depending on which phase you are experiencing with the piece. Sometimes it takes on more of a universal quality, unique and pouring in all directions independently, and sometimes it feels like something which is extremely personal and subjective, something in which you feel totally alone. The only thing you can count on is that it’s never going to feel twice the same.

One would tend to think that with time a piece of music becomes more, maybe more defined, more accomplished, but that’s not actually necessarily the case. It’s almost more the opposite. As with everything — you travel through time with a companion, and the relationship shifts and evolves.