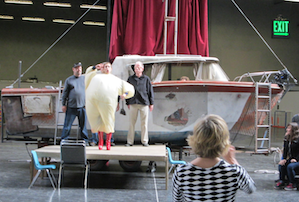 It's rare to get a clear indication of a production's quality from a rehearsal, but that's just what happened on April 19 in the huge empty shell of the old Exploratorium.

An open rehearsal of Opera Parallèle's upcoming double-bill of Kurt Weill's Mahagonny Songspiel and Poulenc's La Mamelles de Tirésias (The Breasts of Tiresias) was an Event in itself, a musical-theatrical gem, the source of excitement and discovery.

The two works are inviting by themselves, but in a sum greater than its parts, music director Nicole Paiement, producer/stage director Brian Staufenbiel, and a fabulously talented young cast are creating a dazzling musical show that will be the talk of town.

It should not be missed, even though the combined capacity of three shows in the 750-seat Lam Research Theater at Yerba Buena poses a challenge to that aspiration. Now is the time to handle the task of getting in.

With a huge old boat in the center of the action, the Staufenbiel-Paiement production is pulling the dystopian visions of the two works — dark in the Weill, hilarious in the Poulenc — together in one comprehensive story. The boat on dry land (it's a global drought, don't you know), is dragged around by singers and supernumeraries. Once Staufenbiel dreamed up the scenario, lo and behold, an abandoned boat — named Meandré II — was found in Scotts Valley and the landowner welcomed the opportunity to get rid of it, saying he had no idea how it had gotten there. True story, making no sense at all; still, the gods of theater once again smiled on Opera Parallèle. 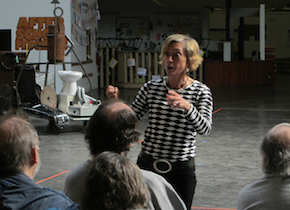 The idea was born out of Staufenbiel's interest in medieval theater troupes traveling from town to town with a wagon that converts to a theater. "I decided to combine the ancient theater tradition by having a theater group in the future repurpose a boat, putting on wheels and convert it into a traveling theater."

In and around the boat, hordes of people shuffle aimlessly in search of space, water, breathable air. The action starts with the Brechtian laments of Mahagonny, seamlessly progressing into the bizarre Apollinaire story set to music by Poulenc about an equally disjointed tale of overpopulation and gender role reversal. The wife becomes a man (Tirésias), the husband gives birth to 40,049 children all at once — represented appealingly by members of the San Francisco Girls Chorus and the Resound Ensemble.

It could all be very artsy and in-your-face performance art, or even agit-prop, but instead, the music and the amazing collaboration and performance excellence of all participants generate a field of energy that makes not only sense of it all, but peaks in a shared impact for cast and audience.

Mahagonny is performed in its entirety and then the desert wanderers in its story meet a theater troupe that tells the story of Les mamelles in hopes of bartering their entertainment for some of the goods and possessions of the wanderers. Parts of Mahagonny Songspiel, in a transformed state, are heard again following Les Mamelles, creating a timeless loop. 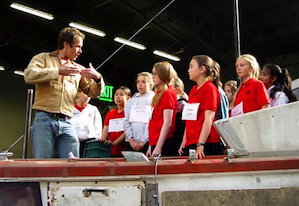 If you need to familiarize yourself with the Poulenc — seldom seen here — there is a good Lyon Opera production on the web.

Big organizations, such as San Francisco Opera and Symphony regularly and copiously import great musical talent, sometimes such stunning teenagers as Yuja Wang, but surely new and often struggling companies can't manage the effort and cost involved in going beyond local boundaries — wonderfully rich as those fields are. 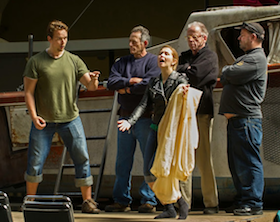 Then there are the newbies to San Francisco: soprano Rachel Schutz, from Honolulu, and baritone Gabriel Preisser, from Orlando — but both also trotting the globe themselves.

As it happens, the two newcomers play the headliner couple in the Poulenc, she the transgender title role, he the husband who ends up giving birth to 40,049 children. (Yes, In one day. It's a fun opera.)

Of Preisser, a fellow cast member says: "Somebody should immediately cast him as Billy Budd — the right age, looks, and voice." He is also exactly right as Le mari and Bobby in Mahagonny.

Schutz makes a big initial impression — a great, focused voice, consistently projected, along with vibrant, convincing stage presence — which then intensifies as her performance remains consistent.

Schutz' biography reads like the story of someone three times her age: born in Wales, raised in Germany, joining the University of Hawaii faculty (and her pianist-accompanist husband there), with singing appearances around the country, extensive coaching work in China, and then — our luck — a quick trip to San Jose:

Some time ago, I participated in the West Coast Auditions, held every year in San Jose, where many West Coast companies gather to hear singers at once, and had "Non, monsieur mon mari" (Thérèse's opening aria in Les mamelles de Tirésias) on my list, but people rarely ask for it.

I think I began the audition with Strauss' Fiakermilli aria (from Arabella) and then to my surprise, they asked to hear the Poulenc. I learned later that it was in fact Jacques Dejardins who had asked to hear the aria because Opera Parallèle was considering doing the opera. Sure enough a few months later I got a call from Jacques asking me to do the role, which I immediately accepted as I've wanted to do the opera for years. 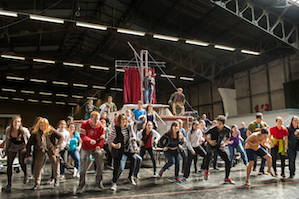 Dejardins is Opera Parallèle's ever-present artistic administrator. He not only found Schutz (and other singers), but also helps the organization in many other ways. Schutz continues:

I have to say that I didn't know much about Opera Parallèle when I accepted the job, as they are a relatively new company, and I hadn't gotten wind of them in Hawaii yet. But when I found out about their work, I became very excited about the prospect of singing with a company that performs lesser-known contemporary and chamber operas in new and interesting ways.

Brian and Nicole are brilliant and the company is right up my alley. I love contemporary music and I luckily get to perform it frequently. My first opera experience was a full singing role at age 11 in the world premier of a chamber opera called The Roswell Incident with a touring company in my native Wales.

The idea of combining these two operas, in three languages, coming from such different national backgrounds but sharing so much and fit so well together by Nicole and Brian really appeals to me; I hope to get to work with them again.

About the atmosphere at the rehearsals and the selfless collaboration that is developing this production, here's one of the supernumeraries, working side by side with the singers, in the Exploratorium on Saturday:

"The cast are all literal troupers. When they had to rehearse in that boat before it had been vacuumed on Friday, having just arrived via a truck and Caterpillar from Santa Cruz, we all immediately became a supportive troupe because the thing was so dangerous, and everyone's initial instinct was to protect each other. Now it's 72 hours later, and I started crying at one moment this afternoon because I could see the alchemy happening in front of my eyes."