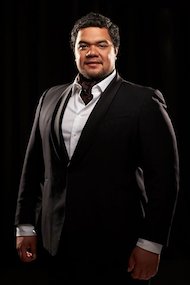 Last week's cautious report here about the possible withdrawal of young, super-talented tenor Pene Pati from the prestigious Adler Program was confirmed by a statement from San Francisco Opera, using Pati's full name, which he didn't use while in the Merola Opera Program:

Tenor Darren Pene Pati, who was previously announced as a 2014 Adler Fellow, has withdrawn from the program. San Francisco Opera Center’s Adler Fellowship is one of the nation’s most acclaimed programs providing training for young musical artists. The tenor, who is currently on tour with his successful vocal trio SOL3 MIO in his home country of New Zealand, cites logistical problems as the reason for his withdrawal.

Despite his abrupt release from the Adler Fellowship program, Darren Pene Pati has confirmed his intentions to perform his April 27 Schwabacher Debut Recital in Temple Emanu-El. The recital, co-sponsored by San Francisco Opera Center and the Merola Opera Program, will include songs from composers Richard Strauss, Roger Quilter and Paolo Tosti, among others. He will be accompanied by current Adler Fellow Sun Ha Yoon.

Pati is quoted in the announcement as saying "Over the past couple of weeks I have agonized over the significant logistical problem I currently face. After intense discussion, I have arrived at the heartbreaking conclusion that due to other commitments, joining the Adler Program this year will not be possible ... The operatic stage remains my dream, and I plan to return in the future to achieve that goal."

Pati, his brother Amitai, their cousin Moses Mackay, comprise the vocal trio SOL3 MIO, which mixes classical and contemporary music, is on its first national tour of New Zealand.