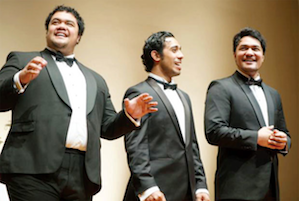 In the long, illustrious history of the San Francisco Opera's Adler Fellowships, Pene Pati is probably among the handful of singers with the greatest promise ... and the biggest need for the discipline and training the program provides, but we'll never know how that would have worked out.

Pati turned down the fellowship because his SOL3 MIO operatic/pop trio is sensationally successful in his native New Zealand, so this not-ready-for-prime-time tenor is already in a prime time hit parade.

Following the big impression he made in the Merola Program last year, Pati was awarded the Adler and a Schwabacher Debut Recital. Even while not taking the fellowship, he returned to San Francisco on April 28 to give the recital in Temple Emanu-El's Martin Meyer Sanctuary — an event both exhilarating and disconcerting with thoughts of what the future may or may not bring.

Pati's voice is amazing, with shades of Pavarotti's ping and Bergonzi's lyricism. He has a winning personality (a single tune-up chord on his guitar, followed by "that's close enough"), and an obvious talent for languages: He sang the recital in French (Fauré and Liszt), English (Roger Quilter), German (R. Strauss), Italian (Tosti), Basque/Spanish (Sorozábal), Samoan, and Maori. 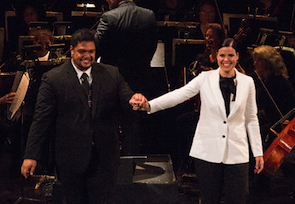 Accompanied with her usual splendid pianism by Sun Ha Yoon, Pati sang beautifully and with intelligent musicality, but small signs of the need for further coaching kept popping up. Just because he has a big voice, there was no need to go fortissimo in Liszt's "Oh! quand je dors" where a solid forte is needed. In the same song and also elsewhere, Pati's attempt to hold a semi-falsetto note at the end faltered — a strange problem when he has both the full voice and can hold the highest notes seemingly forever (listen to the end of his Lucia duet).

Needlessly high volume, especially at the end of songs ("Toujours," "Heimliche Aufforderung") and the middle of "Allerseelen," had its impact on Yoon, who launched into "Toujours" and even "Ruhe, meine seele" with the kind of bang I've never heard her use in the years of her important presence here.

I wasn't looking for chances to nitpick; the lack of maturity and finish just came up repeatedly. With this great voice and limitless potential, Pati should serve his time honing his artistry, instead of cashing in immediately.

The singer who could perform so impressively in school three long years ago, may do better than spend all his time on a Three Tenors shtick. But even so, that outsized personality comes through, as in (go to 5:30) and today in the hilarious delivery of Strauss' "Ach weh mir ungluckhaftem Mann" that had everyone in stitches. I admire Pati and I worry about him.