In the world of maestros with titanic egos, Pocket Opera’s Donald Pippin is a heartwarming exception. He is self-effacing, even humble. To a fault. Considering his accomplishments, all that modesty seems downright excessive. 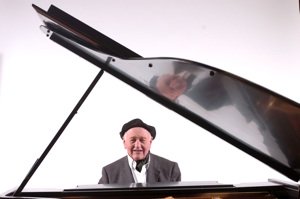 Yet there he is, seemingly disappearing within the piano that he plays brilliantly, behind the Pocket Philharmonic that he leads without visible gestures, even downstage where he beguiles the audience with his shy, quiet (now amplified) explanations of the most complicated opera plots, often having the listeners in stitches.

Pippin’s personality shines through a situation in which I tried to avoid the usual chronological saga of The Little Opera Company That Could by asking him instead about future plans, hoping for some grand pronouncements. His response:

I never think about the future; it’s unknown territory. I don’t plan ahead; my main interest is in survival in a world where everything is becoming more expensive and more difficult for an opera company, regardless of its size.

OK then, back to Plan A. First, the past.

Born 84 years ago in Zebulon, North Carolina, and educated at Harvard University, Pippin began his career

as an accompanist at George Balanchine’s School of American Ballet in New York City.

He moved to San Francisco in 1952 and tickled the ivories to great acclaim in such city landmarks as the “hungry i” and Opus One in North Beach, presenting a weekly chamber music series at the Old Spaghetti Factory. There, while preparing a concert performance of Mozart’s Bastien und Bastienne, Pippin wrote his first translation. The year was 1968 and he never stopped.

His clear, understandable, witty English versions of dozens of operas — in supertitles as well as in English performances — have become the staple of companies both big and small, ranging from the San Diego Opera to the Aspen Music Festival. 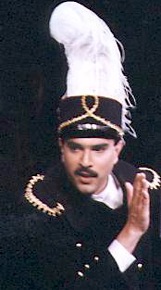 What makes his work different, Pippin says, is that “I don’t translate, I stay true to the central core of the story, in my own language.”

Example from The Elixir of Love, as Sergeant Belcore is recruiting Nemorino:

Pocket Opera was born in 1977, on the 25th anniversary of Pippin’s North Beach concerts. The story, as related in Carolyn Crawford’s UC Bancroft Library/Regional Oral History Office (ROHO) interview, may sound faintly self-serving from the Classical Voice point of view, but here’s Pippin:

[SFCV Founder] Robert Commanday, also the leading critic at the Chronicle and a strong supporter, got excited about [a production of Giulio Cesare] and wrote a very nice long article about my unusual career.

As a result of all this, somebody sent me in the mail a form from the California Arts Council, and with the form was the suggestion, “Why don’t you apply for a grant?” At the time we were doing some touring with our one-act operas and, more ambitiously, with an occasional Handel.

We were then going under a name that I thoroughly disliked, even though I had come up with it myself: Opera Concertante. But our purpose was to do opera in English and to get away from this kind of high-flown pseudo-elegance.

At any rate, the form from the CAC arrived, an application for touring money. It asked just one question, “Why do you need the money?” and left four lines — just four lines! — for the answer. It even stipulated, “Do not add anything further.” Well, this was unbelievably refreshing! Though generally I have a horror of filling out forms, this was one I thought even I could handle. My debut at grant writing! 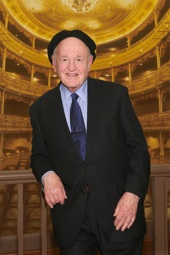 In the 33 years since, Pippin and Pocket Opera have introduced this most complex and expensive of all music genres to thousands in a simple and inexpensive manner, extended the understanding of opera fans through the introduction of little-known works, brought opera to numerous locations, and helped young artists launch their career.

And so, to the present. Pocket Opera’s current season already has seen Rossini’s Cinderella, has produced Moniuszko’s Halka, and is getting ready for Puccini’s La rondine or, in Pippin-speak, The Swallow (April 24–May 9), then Handel’s Rinaldo (May 22–June 5), Offenbach’s La Vie parisienne (June 6-19), and Verdi’s La traviata (July 10-18).

After that? No firm plans yet, but an important question before the company is where to play in the East Bay, now that the Julia Morgan Theater will no longer rent to opera companies. Berkeley Opera found a great new home in El Cerrito — perhaps to be shared with Pocket Opera?