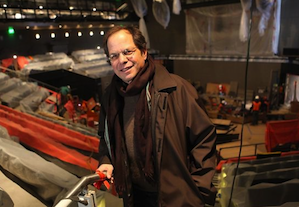 It was 10 days past Epiphany, and a week short of opening night, when SFJAZZ’s miracle at Fell and Franklin Streets was visited, not by three wise men, but by a whole host of wise guys and gals, in the guise of the Fourth Estate.

Inside the awesome but comfy Robert N. Miner Auditorium of the new SFJAZZ Center, the press last Wednesday heard testimony from the team who had designed and would be making good use of the unique edifice, and witnessed how well it showcased the musicality of percussionist John Santos and his ensemble, who played a short set. There was much evidence of the institution’s intent on engagement, including a large window in the south wall of the auditorium that will allow drivers and pedestrians passing by to gaze in through the huge windows that line the ouside of the building. Looking past the glass enclosure of Charles Phan's cafe, they'll view the actual stage.

Aside from its functional promise, the center stands as testimony to the persistence and vision of Randall Kline, its executive artistic director, who founded the Jazz in the City festival 30 years ago and grew it into the all-year, multitasking SFJAZZ organization. Kline spoke about the facility’s other means of outreach, including broadcast and webcast technology (which will put this Wednesday night’s sold-out opening concert and party out to the world, with help from NPR), plus large video screens in the downstairs lobby, where the sights and sounds of the auditorium will be displayed for those unable to get sit-down tickets to sold-out shows.

The much smaller Joe Henderson Lab will function “like the clubs which used to exist [in the Bay Area], but don’t, in the quantity that they used to,” said Kline. “We’ll hire a lot more of these [local] people by having this.” The Lab will be the site of the Hotplate Series, formerly housed at Amnesia on Valencia Street, of a poetry festival organized by SFJAZZ’ Poet Laureate Ishmael Reed, as well as of other special programs featuring locals, at ticket prices more affordable than those for the big-name Miner Auditorium shows.

“The Other Minds Festival is going to be presenting here next year, and Philharmonia Baroque looks like they’re going to be doing their season here.” – Randall Kline, SFJAZZ executive artistic directorRehearsals in the Lab by the SFJAZZ High School All-Stars and the professional all-star SFJAZZ Collective will be clearly visible from Franklin Street, tangibly establishing the center’s place in what Bannus Hudson, chair of SFJAZZ’s board of trustees, envisions as “a larger arts center,” taking in the nearby Davies Symphony Hall, Herbst Theatre, War Memorial Opera House, and San Francisco Ballet headquarters, as well as the San Francisco Conservatory of Music.

In a personal interview, Hudson pointed out that, before creating its own new performance spaces, SFJAZZ had made use of several of those neighboring venues. Although his fellow board members are “all jazz enthusiasts,” he noted that many have seats on the board of other arts organizations. Hudson also praised Randall Kline’s outreach to the 94 percent of the world still lacking a direct connection to jazz “because they understand jazz very narrowly, whereas Randall has helped define jazz very broadly.”

“Will this be open late, and can I come by after the Symphony and have a drink or a bite to eat? Absolutely!” – Kline

We’ve done two programs of the Bach Cello Suites, we’ve done Philip Glass with the Kronos Quartet, and we’ve worked with Terry Riley. [More recently,] I’ve had conversations with the Symphony about trying to do chamber music programs here [at the center], and we’ll see how the conversation evolves. But the Other Minds Festival is going to be presenting here next year, and Philharmonia Baroque looks like they’re going to be be doing their season here. This is a contemporary building, but it doesn’t have to be contemporary work that we do here. I’d love to put [Latvian violinist] Gidon Kremer on that stage.

Kline allowed as how the center’s location near established Civic Center venues is less significant to him than its easy accessibility via public transportation. “But what’s great about being near concert halls is that when people come to those shows, they might ask, Will this be open late, and can I come by after the Symphony and have a drink or a bite to eat? Absolutely!”