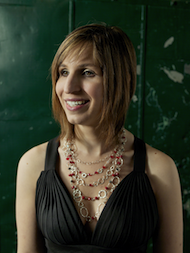 Making jewelry is an unexpected subject when interviewing a singer, but then Laurie Rubin is unusual in many ways, not even mentioning her skill as a skier, which we won't because there are too many other subjects to cover.

Joined by Frederica von Stade, Rubin is featured at the Jan. 14 Meyer Concert Series 10th anniversary Ingrid Tauber Celebration at Temple Emanu-El. But before talking about the concert, the 34-year-old mezzo — blind since birth — answers the question about how she manages to have her own line of handmade jewelry, The LR Look:

I always joke with people that I must have seen colors in a past life because I have an innate understanding of colors. I think also hearing people over the years telling me what colors look nice together, and describing their visceral associations and reactions to colors of the ocean, sky, etc. have really rubbed off on me.

As for the jewelry itself, I do a lot with textures. I love going to bead stores and just listening to the beads clinking against each other, making all sorts of lovely sounds, and I love the different shapes and textures, how they all feel juxtaposed with each other.

I do a lot of jewelry making based on the contrasting textures of various stones, and the neat shapes. My favorite stones to work with are turquoise, pearls, and swarovski crystal for that magical shine and sparkle.

But is she responsible only for the design? "I actually craft it myself as well. I have no elves at my disposal. I enjoy the process though. It's relaxing, sort of like knitting, or so I've heard." 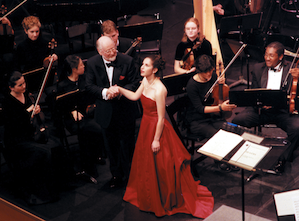 Unlike some other singers, Laurie Rubin loves and masters computers. She is a whiz with e-mail, using Voiceover on a Macbook Pro. "Thank goodness for a revolutionary in technology," she says, "who believed that every computer right out of the box would be accessible for the blind."

From high school in Los Angeles (where she first met Flicka), to Oberlin, and beyond, Rubin has had an acclaimed singing career, appearing in such top concert venues as New York's Carnegie Hall and London's Wigmore Hall. She received high praise from critics, including a Anthony Tommasini review in The New York Times, describing her voice as having "earthy, rich, and poignant qualities."

To get a sense of the variety of her repertory, watch her sing "Non piu mesta", or "You Raise Me Up" at a benefit for the Israel Guide Dog Center, or Berlioz' "Zaide".

Besides her singing career, she has just published a book, has traveled worldwide, and recently, with her partner, Rubin became co-founder and associate artistic director of Ohana Arts, a performing arts community school and festival in Hawaii.

The von Stade connection has held fast since the time when Rubin was student and "Flicka gave a master class, then always kept in touch, we sang together at benefits, and she sent me flowers when I made my opera debut, singing Cenerentola in Oberlin. Each time she helped me, Flicka asked me 'to do her a favor'," Rubin laughs, "and she taught me always to remember who you are and stay close to your family and community." 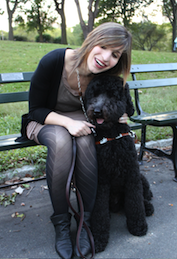 Flicka says of Rubin: "She is amazing. Combination of a beautiful voice, a great sense of music, and the most wonderful spirit of generosity. What is miraculous is her light which is all the more amazing as she's lived in darkness."

A centerpiece of the concert is Bruce Adolph's song cycle written on Rubin's poem, Do You Dream in Color? The composer met the singer in Switzerland where they both participated in the Lucerne International Human Rights Forum.

The concert, part of the series created by Cantor Roslyn Barak, also includes songs by Liszt, Faurè, Sibelius, Jennifer Taira; and arias by Meyerbeer and Gershwin.

Rubin's book is also entitled Do You Dream in Color?, with the subtitle "Insights from a Girl Without Sight," published by Seven Stories Press. Poem, book, and Rubin's activity all focus on her intent "to share with people in very visceral way that I — along with everybody — can have a rich life."

In her poem, she describes the way she experiences colors when creating jewelry:

"There are perfectly smooth round pearls in a midnight blue.
There are raw nuggets of turquoise
whose veins of brown running through each stone
can be detected by my fingers as I feel the beautiful imperfections.
Then my fingers find the stick pearls in an iridescent bronze and green."