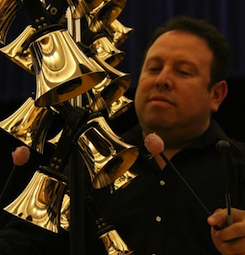 Jim Meredith's Sonos Handbell Ensemble leaves on Dec. 6 for its seventh tour of Japan. The itinerary is for 18 days, includes giving nine concerts in major venues, "all over the Honshu and Kyushu islands from Morioka in the north to Fukuoka in the south," says Meredith.

Of particular interest is our concert in Sendai, a city almost completely destroyed by the recent tsunami. We played there five years ago and it seems the city concert hall is still standing. It will be a deeply moving experience for us to see most of what we remember no longer there. On that last trip there was an earthquake in the middle of the night which was strong enough to awaken us in our hotel.

This Christmas concert tour will repeat traditional repertoire for the holidays, but Sonos will also feature new works written by Meredith. "Sonics" pays tribute to the Japanese taiko drumming tradition:

Two players are seated on the floor, each having a semicircle of bells around them playing with mallets. Standing behind them in two lines are the other 10 players who move on the stage into different positions throughout the piece. 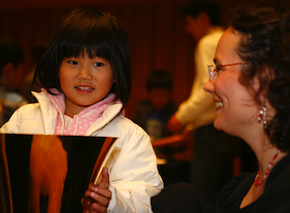 The second piece, Smirti, is for handbells, handchimes, and solo cellist Emil Miland, who is on the tour. The title means "remembrance" in Sanskrit; it is a tribute to the suffering of the people of Japan during recent disasters. Sonos will also perform Japanese music, says Meredith:

We love traditional Japanese music and also music composed by Japanese composers who, after the Meiji Restoration went to Europe to study western traditions. In addition to Hamabe no Uta, the Sonos Quartet will play an arrangement of Sakura in the lobby during intermission and, if the audience claps enough for us to play encores, we might play Aka ton-bo or Sen no Kaze.

Handbell sets used by Sonos can range from a single octave (12 or 13 bells) up to seven octaves, though most ensembles perform on five octaves, or 61 bells. Skilled handbell musicians can play as many as six bells at one time or in quick succession. Sonos performs on four and a half octaves of Malmarks, an octave of bass Schulmerichs, five octaves of Malmark handchimes, and five octaves of English-made Whitechapel handbells, as well as a variety of other percussion instruments.