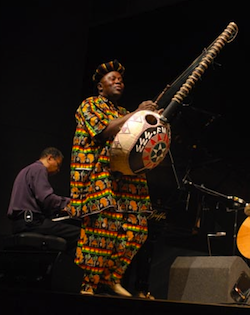 Although his family lineage carries the solemn responsibility of preserving and conveying eight centuries of his West African people’s history, Foday Musa Suso has proven to his many American friends and fans that he’s also an upbeat entertainer … and a bit of a party animal.

He was there in New York last January to help party and perform in celebration of the 75th birthday of Philip Glass, with whom he first collaborated on the soundtrack of Godfrey Reggio’s visionary film Powaqqatsi, in 1985. Among the other Glass celebrants was David Harrington of the Kronos Quartet, for whom Suso contributed a track, Tilliboyo (“Sunset,” in Suso’s native Mandinka/Mandingo language), to the quartet’s best-selling Pieces of Africa album in 1992. Harrington cites Suso as both an upbeat partner and a great storyteller.

The 62-year-old Suso’s ebullience is manifest in abundant laughs and chuckles during a phone interview from his current residence in Seattle, about his personal history and musical mission as well as his upcoming duet with Glass this coming weekend at the Sunset Center in Carmel. Glass will perform on piano, Suso on the kora, a 21-stringed instrument irresistibly sweet to the ear, evoking both harp and lute. (The concert is an offshoot of Glass’ biennial two-week Days and Nights Festival, which will return in 2013 to Carmel and Big Sur, also the future home of the Philip Glass Center for the Arts, Science, and the Environment.)

Suso is a direct descendant of Madi Wlen Suso, a jali or griot (pronounced “GREE-oh”) who fabricated the first kora over four centuries ago, using a large calabash gourd for the body, covering it in cowhide, and inserting a long hardwood pole to which the strings were tethered at their upper end. The griots, accompanying their own vocals, transported through time tales of the Mali Empire, predating European colonization, which ruled present-day Mali, Senegal, Guinea-Bissau, and Gambia. The griot role was passed along bloodlines only among the Susos and a handful of other select families.

It’s thanks to Alex Haley’s novel Roots, published in 1976, and the TV miniseries it inspired a year later, that American readers, viewers, and musicians developed an awareness of and craving for the alluring music of the griots, evocative of and a historical source of American blues and jazz. Researching the character of Roots’ protagonist Kunta Kinte, onsite in Gambia, Haley spoke with Suso’s uncle, Jali Nyama Suso, a griot with a regular program on Radio Gambia. Alerted to growing American interest in griot tradition, the younger Suso, who’d been teaching at a university in Ghana, decided to emigrate to Chicago in 1977, where he allied himself with three local jazz musicians to form the Mandingo Griot Society. Suso, aside from kora, sang and played a variety of West African drums plus a one-string fiddle in the band. It wasn’t long before Haley sought out Suso to enhance his popular TV production with the sound of the kora.

“Suso’s playing is so fluid, and the kora is so natural and beautiful. This has been among [Kronos Quartet’s] magic moments — just the joy of making music together.” – David Harrington

The lilting, transcendent sound also attracted attention from genre-hopping bassist Bill Laswell, who produced several of Suso’s albums and introduced him to the similarly eclectic jazz keyboardist Herbie Hancock, in 1984. Hancock and Suso guested on each other’s recordings, and combined forces on a theme for the 1984 Olympics. The following year, Suso met Glass, and on a long plane trip got to listen to some cassettes of the composer’s unique approach to composition.

“When I got back together with Philip, I told him that everything of his sounded the same to me,” Suso reveals, laughing. “But when I started working with him, I said to myself, Wow, he can play! You can hear a lot of fascinating things. And actually, the same thing applies to kora music: Things keep repeating. You improvise, but you come back to the basic rhythm.”

After the Reggio film, Glass and Suso worked together on music for a 1990 revival of Jean Genet’s play The Screens, portions of which they’ll be performing in Carmel. (The Screens music forms part of a CD, The Music of Philip Glass and Foday Musa Suso, on the Orange Mountain label.) The pair also cowrote Orion, for a concert preceding the 2004 Olympic Games, and they’ve toured internationally. Glass testifies that working with artists from different genres and cultures “brings something new and unfamiliar and unexpected, and provides an impetus for me to grow.” He adds, “These collaborations are reliable environments for me to develop ideas.” Says Suso, with a chuckle, “With Philip, the music always flows in-and-out, back-and-forth, left-and-right. Philip is good in that kind of way.”

Suso points out the natural bond between modern jazz and the music of his homeland. … He notes also that West Africa has spawned more instruments than most other regions of the continent.

Suso has been inspired, since leaving Gambia, to become a composer in his own right, though performing with Westerners has involved a slight retuning of his principal instrument. “If you tune the kora traditionally,” he remarks, “some notes will be sharp and some flat, so you have to make that adjustment.” Aside from Tilliboyo, he’s contributed four other pieces to the repertoire of Kronos, to whom Glass introduced him.

“Everything just spins off his fingers; it’s astonishing,” says the quartet’s David Harrington about Suso, with whom he toured after the release of Pieces of Africa. “His playing is so fluid, and the kora is so natural and beautiful. This has been among our magic moments — just the joy of making music together.”

The magic has extended beyond classically trained instrumentalists and into jazz, with Suso performing and recording with saxophonist Pharoah Sanders and drummer Jack DeJohnette, who share with Glass and Kronos a free-ranging approach to genres and disciplines. “I heard [Suso] with Philip Glass, and told him I was a fan of his,” says DeJohnette, in an interview that centered on his upcoming appearance at the Monterey Jazz Festival. “I asked him to come up to my house and studio,” near Woodstock, in 2005. “Jazz drums and kora had never been done before. We spent four days, we cowrote a few pieces, he would play ’em, and I would come up with the grooves for ’em.” Says Suso about DeJohnette, “Anything I play, he can play something against it. And it will sound like we’ve been playing together for forty years. Wow!”

Suso points out the natural bond between modern jazz and the music of his homeland, in their common affinity for pentatonic modes and for flatting the steps of the diatonic scale, particularly the third and seventh. He notes also that West Africa has spawned more instruments than most other regions of the continent. “We have kora, balafon [a gourd-resonated xylophone], harps with three or six strings, a one-string violin, and a tremendous variety of drums.” That’s not to mention the vocals, which for a traditional griot like Suso involved his learning no fewer than 111 story-songs, some of them 10 or more hours long, by the time he was 18.

Now based in what he calls “quiet and laid-back” Seattle after many years in Chicago, Suso makes regular trips back to Gambia, where his grown sons and a daughter are carrying on the musical bloodline. “I don’t go to clubs there,” he says. “I get in my car and go to traditional areas, checking the music out, telling them, ‘Don’t let the tradition go, because if you don’t have the tradition, you don’t have anything.’” For the Ellipsis Arts label, in 1997, Suso and producer Bill Laswell traveled through Gambia, Senegal, and Guinea-Bissau, compiling a delightful album and creating a gorgeously photographed booklet (the still-available Jali Kunda), which make nods to collaborations with Americans Glass and Sanders but focus on indigenous culture. “I wanted to record the last of the griots,” Suso explains. “The old ones are dying out, and the young ones are not following the traditional way of learning the instruments, including the 111 songs.”

Back in Seattle, Suso makes a practice of keeping his ancestral chops up by playing those songs in their traditional tuning. Take note, though, that the instrument he plays them on proclaims his website, www.fmsuso.com, in large letters on the outside of the gourd, facing the audience. “So now my kora is different from any other kora,” Suso proclaims, laughing heartily.