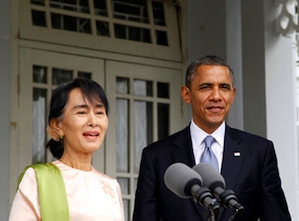 Apropos of President Obama's visit to Burma/Myanmar and the Nobel Peace Prize-winning opposition leader Aung San Suu Kyi this week, The Los Angeles Times reports on the important role of her piano tuner to get through years of home arrest:

Ko Paul had been warned that the old Yamaha piano in the upstairs sitting room of the dilapidated lakeside mansion was in bad shape.

Tropical climates aren't great for pianos. Heat warps their sound boxes, humidity swells their pin blocks, reducing string tension, and termites savor an easy meal. But this one was worse than the piano tuner expected that day in 2009.

"Pretty much everything had to be changed, the pins, the dampers, all the hammers," he said in a coffee shop in Yangon. "It was pretty bad off."

Ko Paul spent a week scrounging for low-quality Chinese replacement parts with Myanmar, which is also known as Burma, under crippling economic sanctions, they were the best he could find and patched the Yamaha together before tuning it. As he worked, he chatted with the slight woman in her 60s who owned the piano.

It was Aung San Suu Kyi, the opposition leader and Nobel Peace Prize laureate, who had been forced to spend years in the heavily guarded mansion under house arrest.

"She wanted me to tell young Burmese not to be afraid, don't live in fear, things will change," he recalled. "And they have."

Ko Paul's contribution was a small footnote to an epic struggle, keeping the old piano alive and lifting the spirits of a brave woman surrounded by hard men intent on breaking her will.

During Suu Kyi's decade and a half of isolation imposed by generals enraged by her opposition party's victory in a 1990 election, the piano had become a symbol of Myanmar's struggle for democracy. A few brave people reportedly slipped past the roadblocks around the mansion on University Avenue to try to hear it, and reassure themselves that she was still alive.

The piano was also on occasion the object of her frustration. In 2004, after hearing that her friend and Burmese poet U Tin Moe was also under house arrest, she reportedly banged it so hard that keys broke.

And in a 1997 interview, she told of bashing its pedals with such vigor in another moment of weakness that a string snapped. "I told you; I have a hot temper," she said to British journalist John Pilger.