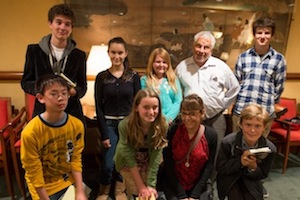 Being recruited to guide a troop of girls and boys through the art and craft of music reviewing came to me unexpectedly, but it fit my active ongoing responsibilities as both writer and parent. Through the auspices of the 826 Valencia writing center, co-created a decade ago by award-winning author Dave Eggers and teacher Ninive Calegari and named for its location in the Mission District, I was teamed early this month with nine eager middle and high schoolers and an invaluable teaching assistant, Clara Sankey. After an introductory evening workshop session, the kids, with me and Clara and some of their parents in tow, attended the San Francisco Symphony’s eminently user-friendly Barbary Coast and Beyond program on May 10, and took copious notes.

The following week, we reassembled at 826 Valencia, talked about the event, and took a look at how professional reviewers had covered it. The kids then set about writing first and final drafts of their own reviews, and you’ll be sharing the delightful results below. We are much indebted to Miranda Tsang and the rest of the 826 crew, the San Francisco Symphony’s friendly and caring staff including Louisa Spier and Amelia Kusar, and the S.F. Chronicle’s Joshua Kosman for their contributions to this project, as well as to those far-sighted parents who brought us the next generation of music lovers and SFCV contributors. — Jeff Kaliss is a SFCV contributor

These reviews were written by students in the Writing for the Symphony workshop at 826 Valencia. 826 Valencia is a nonprofit organization dedicated to supporting students ages six to eighteen with their writing skills, and to helping teachers inspire their students to write.

The Barbary Coast and Beyond was a night of the most diverse group of pieces I have ever heard. The tribute to San Francisco’s musical history glorified the city’s musically tainted past. The San Francisco Symphony presented us with works ranging from musical saw to opera to Stars & Stripes Forever. One of the first pieces that stuck out for me was a banjo trio that played folk tunes from the time of the Gold Rush. The crowd seemed to be writhing with anticipation as if they were expecting Foggy Mountain Breakdown. Unexpectedly, the trio came out with a soothing piece,talking about the hardships of life.

Now let me ask you, how did a saw get into the symphony? If you have never heard a saw being played before, you should. After many hours of contemplation, the best way I found to describe it is a cross between a high pitched wail and a violin. Even with this unruly instrument, Caroline McCaskey’s performance of Orpheus in the Underworld was played with the beauty and the precision of a violin.

The organist Cameron Carpenter walked on the stage with dazzling clothing and spiky white hair to play his version of Sousa’s Stars and Stripes Forever. This Grammy award-winning musician seemed to be flailing his legs around underneath his chair but was actually playing the melody of the song with his sparkled cowboy boots while jamming his finger into every nook and cranny of his organ in a fiery flurry of flesh. 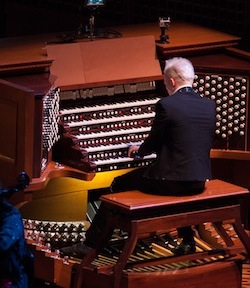 The reflective acoustic squares on the ceiling gave the audience an aerial view of the orchestra as they grandly proceeded through the Coronation March from Le Prophète and three lively pieces for banjo, right into an aria from Les Filles de Cadix (The Girls from Cadiz) sung by Laura Claycomb, a soprano with a clear voice and a range of pitch that could go as high as a mouse and still sound amazing. She appeared three more times, each time in a different dress.

Next came two pieces that were very different. A Mountain Vision: quiet, dewdrops, and sunrise. Then came a piece from the musical drama Mazeppa: being strapped to a wild horse, escaping wolves, and dodging obstacles.

A little later came three pieces in a row that really got me excited: part of Tchaikovsky’s Pathétique symphony, then The Stars and Stripes Forever played on the Davies Symphony Hall’s gigantic pipe organ by Cameron Carpenter. It sounded like multiple instruments at once, and sounded even better with all the different chords in the background, although sometimes it was too much and it sounded slightly like he was pressing his arm down on the keyboard.

This intriguing performance had many guests to attract old-time subscribers and give them more excitement. Val Diamond was my personal favorite part of the show because of her enthusiastic attitude, coming from her former job in North Beach with Beach Blanket Babylon. Laura Claycomb performed amazingly as soprano, and we were almost transported to the Opera House in San Francisco in the performance because of her acting along with her beautiful singing. Vadim Gluzman performed a piece from fellow violinist Ole Bull without a dramatic feature.

One of the next special guests was Anton Nel, who was very involved with his work and played with his shoulders hunched forward over the piano in a very dramatic work of music. From the hours he spent practicing, I’m surprised he didn’t have a hunchback! The song had many twists and turns and surprising visits of forte and piano. The unforgettable Cameron Carpenter presented himself with a mohawk, and he had glitzed up his coat with flared ends. Bill Evans, Jody Stecher, and Scott Nygaard kicked off the show on their banjos. The banjo trio played three pieces, with Jody Stecher singing “Hard Times Come Again No More” by Stephen Foster. Finally came Caroline McCaskey with her diverse talent of the musical saw. After her song, Thomas gave her a hug for her courage in learning the instrument, which many of the audience members thought was funny. 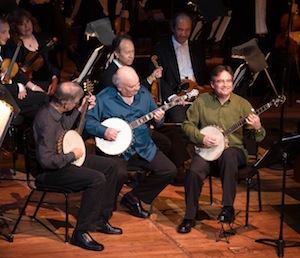 The production was blessed with about a dozen guest performers, each with their own unique talents. The narrator was the well-known Val Diamond, whose deep yet piercing voice helped project the gravely and untamed history of San Francisco as a developing city. Each guest artist brought a new element into the production that would emphasize certain genres in the show.

An outstanding and unanticipated portion of the concert was the banjo trio (Bill Evans, Jody Stecher, and Scott Nygaard) that pleased both old symphony veterans and young novices alike. Their yodels and virtuosic fingerpicking were a fantastic addition to the program. Another guest performer who received major kudos from the audience was organist Cameron Carpenter whose flamboyance both in dress and in playing made him a stand-out.

Moving from pleasant banjo ditties to epic Sousa marches, MTT., the San Francisco Symphony, and all the guest artists put on a heartfelt and enjoyable concert. Why was this concert put on? To glorify San Francisco’s rich musical history? Maybe it was just so the symphony could get stars like Cameron Carpenter and Val Diamond to perform. Possibly for all these reasons, but most importantly to put on a production that would satisfy old symphony goers as well as today’s youth, whose awareness of classical music has decreased in recent years. With this show, the symphony did an amazing and memorable job.

San Francisco’s music a century and more ago was inspired by the real events happening then. For example, when gold was discovered in California, famous composers began writing songs about the Gold Rush. When the earthquake of 1906 hit San Francisco, J.H. Stockman wrote a piece for the piano called The Earthquake in San Francisco.

A big part of the music that the San Franciscans heard back then was from touring musicians. There were opera singers, pianists, and violinists who came to San Francisco during the Panama-Pacific International Exposition, the international fair that brought together a lot of the world’s greatest performing groups and different types of music.

The Symphony performance was really entertaining, with Val Diamond as the narrator who explained the show with humor.

The person who seemed the most interesting, however, was Cameron Carpenter, the organ player. Cameron had stylish hair and shiny clothes, and at one point in his performance, he played the organ with his feet!

Although most of the performance was fabulous, there were also a few dull pieces thrown into the pot. The three banjo players played slowly and tediously, almost like a boring lullaby. Stockman’s The Earthquake in San Francisco didn’t seem like anything special.

The hall was beautiful. It was filled with velvet chairs and glass panels dangling from the ceiling. Val Diamond from Beach Blanket Babylon couldn’t have been a better choice as narrator. Her loud, melodious voice traveled through the hall wonderfully, and she’s a great San Francisco icon who has an amazing stage presence. She came onstage in a sparkling, sequined shirt, which was almost as stunning as the music. She spoke about a wide variety of San Francisco’s historical figures, including Lola Montez, a showgirl. Laura Claycomb, an incredibly gifted soprano with an outstanding range, paid tribute to Lola in her first appearance on stage. Laura Claycomb entered wearing a gorgeous red gown that I would wear any day, and she impressed both the audience and me. She not only sang gorgeously but had loads of personality and attitude. Laura Claycomb reappeared throughout the evening, with lots more costume changes.

The program was filled with well-known songs played with a twist, like The Stars and Stripes Forever, which was played on organ by Cameron Carpenter. He wore a sparkling suit and had spiky hair. He played enthusiastically and moved all over the organ, pressing and stomping on keys, buttons, and pedals, and I thought the Stars and Stripes had never sounded better.

The most fun part of the concert was Val Diamond’s narration. She had the best gossip on musicians from San Francisco history, told in a very funny style.

The concert ended with three sung pieces, “Hello Frisco Hello”, from TheZiegfeld Follies, and two classic San Francisco songs, “San Francisco”, and “California Here I Come.” The audience was invited to sing along (and did, a little quietly). For “Hello Frisco Hello”, Val Diamond and the soloist Laura Claycomb sang together. It was strange to hear Val Diamond’s big brassy voice with Laura Claycomb’s delicate, pretty soprano. The audience didn’t know that song, but as Val Diamond said, “You’ll all be singing it in the shower tomorrow.”

Not every piece was equally strong (of course). A Mountain Vision, by the Danish violinist Ole Bull, went on too long, though violin soloist Vadim Glazman displayed impressive playing across his range. Saint-Saens’s combination of “The Star Spangled Banner” with “The Marseillaise” was overly loud, and the two songs didn’t fit well together. But overall, the concert was interesting and enjoyable, and not your usual night at the symphony.