Picking a handful from the Bay Area's hundreds of musical attractions is, by necessity and definition, an eclectic affair.

Besides the promise and known (or assumed) high quality of these events, a primary criterion of this personal and perhaps idiosyncratic selection was to cover as wide a variety as possible — something that is ready-made to this richly variegated area. 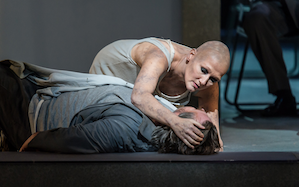 Unlike Met HD telecasts in hundreds of theaters, the Royal Opera's HD casts can be seen — as of now — only in a few places. So when the great Covent Garden revival of the Stephen Langridge-Alison Chitty production of Wagner's Parsifal is shown at the beginning of the year, in San Francisco, you need to seek out the Clay Theater on Fillmore.

Also unlike the Met, Royal Opera/Arts Alliance Media/Live Cinema HD prices are in the regular movie-ticket range, about half of the Met's.

Catching a Dance Festival in the Making 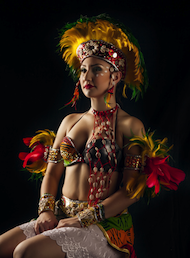 Nearly a hundred companies will vie for spots to participate in the San Francisco Ethnic Dance Festival Jan. 10-12 in Berkeley, in auditions open to the public.

Besides performances, artists were also given the option to submit their auditions on video, and audience members will have the opportunity to view these videos as well. Auditioning artists will perform in full costume, many to live musical accompaniment.

Organizers of the festival say the auditions offer a rare opportunity for the public to watch dance from around the world, with the option of entering and exiting the theater every 10 minutes or so in breaks between performances, a special option for families with children.

The 2014 San Francisco Ethnic Dance Festival will be held June 5-29 in the Yerba Buena Center for the Arts and other venues in San Francisco. 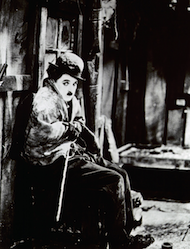 Producer/director/star/pioneer/composer Charlie Chaplin will have an entire day in the Castro Theater to himself on Jan. 11. Musically speaking, the day begins with The Vagabond (1916) in which Chaplin plays a musician who rescues a girl from a band of gypsies, and ends with two great silents — The Kid and The Gold Rush — Timothy Brock conducting the San Francisco Chamber Orchestra in Chaplin’s simple, haunting scores.

The S.F. Silent Film Festival presentation of The Little Tramp at 100 will add two other shorts to The Vagabond at 1 p.m.: The Cure (1917), and Easy Street (1917). This program is accompanied by Jon Mirsalis on piano.

At 4 p.m., it's The Kid, Chaplin's most personal film of comedy and sentiment, from the artist who himself was placed in a home for destitute children at age seven. The film is preceded by Kid Auto Races at Venice (1914), with the first appearance of Chaplin’s Little Tramp character.

The Gold Rush, beginning at 7:30 p.m., features Chaplin as a prospector in the 1896 Klondike gold rush, incorporating scenes from the Donner Party disaster of 1846, transforming stories of cold, hunger, and loneliness into rich, memorable humor.

Germany and Music — Who Knew? 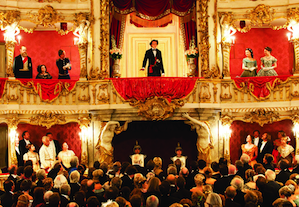 When the Berlin & Beyond festival of German-language films comes to the Castro Theatre and the Goethe Institute, Jan. 15-21, there will be a heavy dose of music in and about the movies.

The royalty royally supporting Richard Wagner, Ludwig II of Bavaria, lends his name to a film by the late Peter Sehr and his wife Marie Noëlle (who will attend the Castro screening and a special tribute program to Sehr before Ludwig II is shown).

Sabin Tambrea won several awards in 2013 for his portrayal of Crown Prince Ludwig who took the thrown at age 18 when King Maximilian II died. Uniquely, Ludwig molded his kingdom into a center of beauty, ruled by the arts, Wagner manipulating Ludwig’s passion for his operas. After losing a war, Ludwig retreats into his dreamworld, ransacking the royal coffers to build the palaces of his visions. 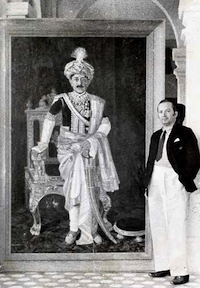 Another of several music-oriented festival films is Sound of Heimat: Germany Sings, about a saxophonist from New Zealand scavenging in the East German boondocks. Hayden Chisholm embarks on an expedition across Germany, during which he meets old and young, traditional and modern folk musicians. The wide variety of German folk music is portrayed here in its full splendor.

Emphasis on art more than on music is to be found in Munich in India, but it's a fascinating film, well worth plugging here. Hannes Fritz gave up his job as a banker in 1925 to become a painter, going by the name Fritz-Munich from 1930 on. As the Nazis were seizing power in Germany, the painter escaped the coming era of terror at home, traveling the Indian subcontinent, and becoming a court painter to maharajas.

Konstantin Fritz, the painter’s grandson, searches for clues of Fritz-Munich’s paintings in India and of his adventures, seeking to find the truth beyond the stories about India that he heard as a child. Accompanied by his grandfather’s historical diaries and his unique historical 16mm film shoots, the protagonist follows Fritz-Munich’s former travels, through India of today.

The film also covers German and Indian history in the first half of the 20th century, the lavish life in the palaces of the maharajas and the British colonial rulers, about the time after independence and contemporary India.

Dancing to Porter and Diderot 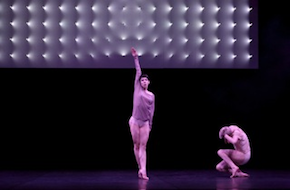 Wayne McGregor, Resident Choreographer of the Royal Ballet, combines spectacle and an exceptional literary-historical-philosophical subtext in his return to the Yerba Buena Center, Jan. 17-19, with San Francisco Performances.

The company, Wayne McGregor|Random Dance, offers FAR, to an original score by experimental composer Ben Frost and a set design incorporating a computerized pin board of 3,200 LED lights by rAndom International. So much for the visuals, now about Deep Thought: FAR is inspired by Roy Porter's history of 18th century explorations into body and soul, Flesh in the Age of Reason (or, the F-A-R of the title).

Porter, whose book was published posthumously a decade ago, investigaged the explosion of rational thought and scientific innovation during the Enlightenment, and how these began to change our understanding of flesh and soul. In Simon Shama's words:

Porter sees the alteration in the second half of the 18th century from a culture that celebrated embonpoint and fleshiness as a sign of vitality to Byron's narcissistic regime of diet and exercise as a genuinely fateful moment: the beginnings of the obsession with youthfulness (especially svelte youth) as a paradigm of beauty. Similarly he is marvellously illuminating on the first writers, such as William Alexander, a whole generation before Mary Wollstonecraft, who were able to argue that gender was a social construction. 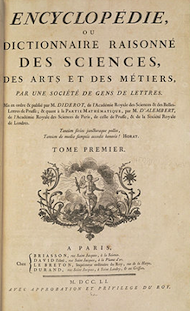 Of this, a ballet? McGregor explains:

What we've been doing is unpeeling the layers of the creative process: how do we understand better what happens in the creative process, and how do we arm dancers to build better imaginations? And I thought that stripping away of layers was analogous to the very beginning of the Enlightenment.

McGregor was also inspired by illustrations from Diderot's 18th-century Encyclopaedia when creating FAR, which reveal the "levers and pulleys" of human action.

"You see how it works," says McGregor. "At the end of the day, these aren't robots-it's always a human being doing it. We have such a normalizing, limited view of what the potential of the body is. I really respect and like the aesthetic of ballet, but it's only one part of the continuum of possibility. I like bodies misbehaving, because I think it engages your eye in a way that clarity of line doesn't." 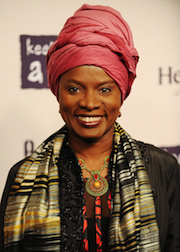 From Benin in West Africa comes famed singer-songwriter Angélique Kidjo, appearing at the S.F. JCC on Jan. 24, along with John Santos. The Grammy-winner performer of a blend of tribal-pop-zouk, rumba, jazz, and Latin music, sung in English, French, Fon, and Yorùbá. Kidjo is considered Africa’s greatest living diva.

Acclaimed for her uplifting and dynamic music, Kidjo is also a bestselling author. Her new book, Spirit Rising, tells the story of her escape from Communist Benin into France, her rise from poverty to become an international sensation, and her work for the education of African girls and women’s rights. 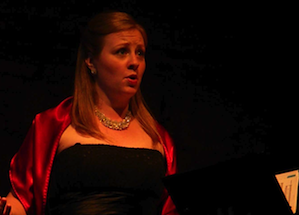 The American Bach Soloists' 25th season continues Jan. 24-27 with Magnificat and three other works by Bach: the secular cantata Tönet, ihr Pauken! Erschallet, Trompeten! (“Sound, you drums! Ring forth, trumpets!”); Orchestral Suite No. 2 in B Minor, with flutist Sandra Miller as soloist; and the cantata Herr Gott, dich loben alle wir ("Lord, we all praise you").

Music director Jeffrey Thomas says three of the compositions call upon especially heraldic trumpet ensembles. the Magnificat is "like a delicious smorgasbord of sweet and savory vocal delights," and Tönet, ihr Pauken! has music that eventually became part of the Christmas Oratorio.

Wu Man: Has Pipa, Will Travel 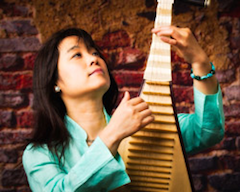 Pipa virtuoso Wu Man https://www.sfcv.org/article/music-news-july-2-2013#-airlines-sordid-history-vs-musicians famously fell victim to airline negligence not long ago, but all is well again, and she is heading our way (presumably not on US Airways) to perform.

Winner of Musical America's 2013 Instrumentalist of the Year Award, Wu Man has been both a star soloist and a renowned scholar of music in little-known regions of Asia through research of her instrument's history. The pipa's four strings stretched over a shallow rosewood box can produce rich, complex music in her hands.

Her Cal Performances recital will explore the full range of the instrument by demonstrating traditional sounds, as well as those she creates when performing with such contemporary composers as Tan Dun, Terry Riley, and Philip Glass. 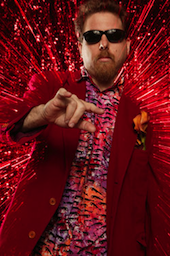 The Left Coast Chamber Ensemble's Jan. 30 and Feb. 3 concerts pair Pong and Billiards, the former by the Ensemble's 2003 composition contest winner Moritz Eggert, and the latter by Mozart — his E-Flat Trio, nicknamed "Kegelstatt." Pong is identified as "a charming musical rendering of the 1972 Atari game."

And there is more: Steve Horowitz's new quintet, The Wonder Pets Save the Circus, and Scott Lindroth’s Yield to Total Elation, "a musical parallel of the imaginary world envisioned by Achilles Rizzoli, reflects the fanciful vision of an architect at play."

Left Coast Ensemble Artistic Director Anna Presler says of Foumai's Scat: "It is a bright colorful piece with lots of fetching interplay among the strings and winds. The musicians feel that it will be a lot of fun to perform and will also appeal to our audience. There is great potential to play around with the rhythm, exploiting the scat singing inspiration for the music." 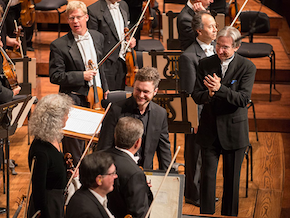 Berkeley Symphony opens the 2014 portion of its season on Feb. 6 with the world premiere of Samuel Carl Adams' Violin Concerto, conducted by Joana Carneiro, with Anthony Marwood as soloist.

The Berkeley native is the son of composer John Adams and a graduate of Berkeley’s Crowden School. He has just turned 28 on Dec. 30, but his works have already been performed by major orchestras, including the San Francisco Symphony, which has featured his father's works scores of times over the decades, and whose own Violin Concerto is among the most important works in contemporary music.

Sam Adams' Drift and Providence, co-commissioned and premiered by SFS and the New World Symphony, is scheduled to be performed in Carnegie Hall as part of the San Francisco Symphony's Fall 2014 national tour. Last spring, Adams was composer in residence at Spoleto Festival USA, where his String Quartet in Five Movements was premiered by St. Lawrence String Quartet, repeated in Stanford’s new Bing Concert Hall in the Fall. 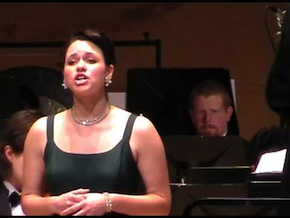 San Francisco Opera's Adler Fellows, past and present, will be in the cast, including Maria Valdes as Rita, Thomas Glenn as Beppe, and Efrain Soli as Gasparo.

The program is rounded out by instrumental works from famous operas arranged for the ensemble by Clarice Assad, including Richard Strauss’ "Dance of the Seven Veils" from Salome (apparently, according to subsequent information, to be replaced by another Strauss — Johann — and his somewhat merrier overture to Die Fledermaus; Massenet’s "Meditation" from Thais, with Salerno-Sonnenberg as soloist; and Mascagni’s great, sweeping Intermezzo from Cavalleria Rusticana.

Even Verdi appears on the program, with the Prestissimo from String Quartet in E minor, his only surviving chamber work.