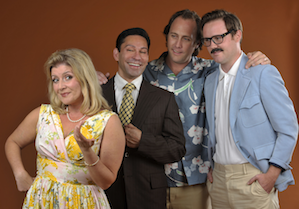 Y'all know My Fair Lady and Brigadoon, but what about another Burton Lane-Alan Jay Lerner musical, Carmelina? Drawing a blank? No wonder: This 1979 Broadway failure (that closed after 17 performances) is getting its West Coast premiere at age 33.

Don't be hasty in sneering at short runs. The greatest of them all, Stephen Sondheim, knows all about that. The 1964 Anyone Can Whistle lasted one week; his first musical, Saturday Night, written in 1954, remained unproduced until an Off-Broadway premiere in 1997.

But back to Carmelina, now at Eureka Theater, being produced by — who else? — 42nd Street Moon. Founder and Artistic Director Greg MacKellan explains:

Although it was based on a hit movie, Buona Sera, Mrs. Campbell, its charming, lush musicality didn’t hold up in a season that included a wave of gritty new works including Sweeney Todd. The source film also served as the inspiration for Mamma Mia! in 1999.

Hailed by Clive Barnes as Lane’s best score since Finian’s Rainbow, the show has only been revived for two concert presentations at the York Theatre in New York City. The show has never been seen outside New York since its initial run, marking this as both its first post-Broadway full production and its West Coast premiere. MacKellan directs the production and Dave Dobrusky is musical director.

The story is about Carmelina Campbell, an Italian woman posing as the widow of a non-existent soldier. The year is 1962, and she is faced with the return of three American GIs who liberated San Forino in World War II. Having been romantically involved with each, Carmelina knows that one of them is the father of her teenage daughter Gia, but she’s not sure which. You know the rest of it from Mamma Mia!.