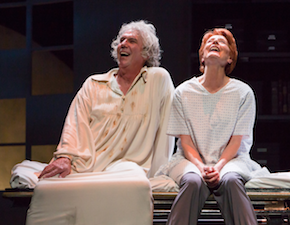 When Moisés Kaufman's 33 Variations had its Broadway premiere in 2009, press advances, features, and reviews uniformly concentrated on just one thing: the return of Jane Fonda to the stage after 46 years of absence.

Mountain View's TheatreWorks, which started the play's West Coast run last weekend, cast Rosina Reynolds in the lead role, and she is giving a splendid, believable performance, without sucking the air out of the play.

Reynolds plays the musicologist Katherine Brandt, obsessed with Beethoven's own years-long fixation on Anton Diabelli's short, simple waltz, which the Viennese music publisher submitted in 1819 to 50 composers, soliciting variations. Schubert, Czerny, Hummel, and the Archduke Rudolph all took the hook, spending a day or two on the challenge. As for Beethoven — ill and mesmerized by the challenge — he set aside the Eighth and Ninth Symphonies, the Missa Solemnis, and who knows what else.

According to the usually unreliable Anton Schindler, Beethoven at first regarded the banal little tune as "Schusterfleck" (probably something on the sole of a shoe), but then spent some of his remaining years before his death in 1827 to create the wondrous, unique Variations. (The world has disregarded Beethoven's change of "Variationen" to "Veränderungen" which also means transformations; he also switched from "a well-known German dance" to "a Walz by Diabelli," making the publisher immortal.) 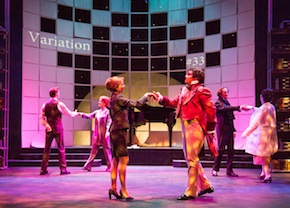 The TheatreWorks production, directed by the iconic Robert Kelley, is excellent, the play itself is pretty good (its illustrated-lecture, Beethoven-for-Dummies nature rankles at times), but its "soundtrack" makes it an experience. Just as Brian Friel’s Performance is made to glow by the inclusion of live performances on stage of Janáček's two string quartets, as the Requiem assuages the excesses of Amadeus, in Mountain View, too, music prevails.

At the piano throughout the play, William Liberatore's illustration of the text with fragments or whole sections of the Diabelli Variations makes it all worthwhile. Fans of the music and, especially, newbies will learn and have a memorable experience.

As if the subject, the troubled birth of the music, wasn't complex enough, Kaufman tries to weave many threads together. The musicologist travels to Bonn to study the manuscripts, even as she is struggling with the onset of ALS or Lou Gehrig's disease. She and the deaf, tortured Beethoven (Howard Swain) interact on their related quests.

Schindler (Jackson Davis) serves as an intermediary between Beethoven and increasingly impatient Diabelli (Michael Gene Sullivan); Brandt's daughter (Jennifer LeBlanc), back in the U.S., is trying to communicate with and protect her distant mother; a young nurse (Chad Deverman) is both helping the daughter and courting her; and, in Bonn, the Beethoven archivist (Marie Shell) provides both information (are those spots on the manuscript from wine or food?) and support for Brandt. Except for Swain's failure to breathe life into Kaufman's caricature of the composer, the cast provides exceptional performances.

It's both too much and not enough. The simultaneous presence of characters from three centuries apart is not made more palatable by Andrea Bechert's confusing scenic design ... or Kaufman's lack of ability to present theatrical time travel the way Tom Stoppard seamlessly managed to do in Arcadia.

And yet most importantly, there are the Variations or, rather, Transformations. See the play and then put the Brendel or Richter recording on the turntable, crank up the phonograph, and hear what it's really all about.