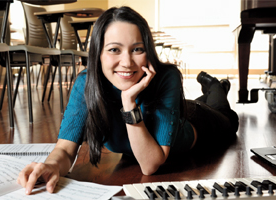 Volti San Francisco, Robert Geary's chamber chorus that's a six-time ASCAP-award winner for showcasing contemporary American music, holds a young composer competition every year. This year's winner is Melissa Dunphy, who is flying in from Philadelphia to workshop her new work with Volti at an event free to the public.

Rehearsal begins at 7 p.m. on Oct. 16, in the First Unitarian Universalist Church in San Francisco, but for a half hour before then, Volti is offering snack and chat. I bet part of the chat will be about Volti's upcoming 35th season.

Dunphy, 33, is from Australia, recepient of many awards, best known for her Gonzales Cantata, based on the Senate Judiciary Committee hearings of former Attorney General Alberto Gonzales. She is working for her doctorate in composition at the University of Pennsylvania on a Benjamin Franklin Fellowship.