Cal Performances' thrilling Esa-Pekka Salonen/Philharmonia residence over the weekend was a 72-hour blur of performances, rehearsals, masterclasses, various kinds of collaboration with the university.

Other than the audience at Saturday's superb concert performance of Berg's Wozzeck, main beneficiaries of the residence were members of the UC Berkeley Chamber Chorus. 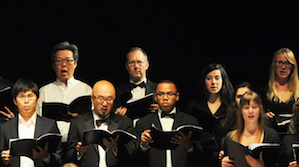 The Berkeley instrumentalists have a relatively meaty role as the offstage military band, but the chorus ... well, first and foremost, they sit upstage, where there is the best viewpoint; get a modest fee, and perform very well, but — how to say it? — minimally.

The men sing during the tavern scene, but the women rise to the occasion only at the end of the opera, when sopranos sing six and a half bars, and the altos three bars. Total. All on the page of the score shown here.

A blissful job, to be envied not for lack of work, but for the opportunity it affords to be the audience at such a memorable event. 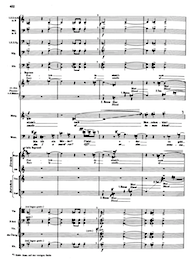 Transportation and lodging of the Berkeley participants for the rest of the tour are provided by Cal Performances, whose Director, Matías Tarnopolsky, says "These kinds of experiences for our UC Berkeley students are life-changing."

The 1925 Wozzeck, one of the earliest and most influential atonal operas, has never been an easy sale.

Even Salonen, who has called the work in a San Francisco Chronicle interview "central to my life and repertoire," admits that "it's a difficult piece — not exactly the 'Nessun dorma' experience."

That alone might not have explained the many empty seats Saturday night in Zellerbach Hall, but there was also the game. On any football-crazy university campus an event conflicting with a late-season game (the Golden Bears losing to the Oregon Ducks 59-17) is likely to keep students out of the concert hall, no matter what — and the traffic/parking jam might have further helped exclude numerous less adventurous or mobile visitors.

If not ticket income, what's making the tour of the 100-plus orchestra possible? 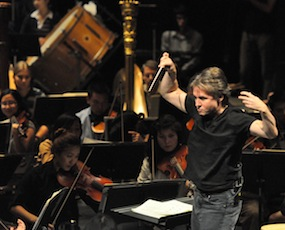 The Philharmonia Orchestra's principal supporter, The Meyer Foundation, and British Airways were mostly responsible. Support to bring the orchestra to Berkeley came from, in part, Ann and Gordon Getty, the Barbro Osher Pro Suecia Foundation, and our patron sponsors Shirley D. and Philip D. Schild.

Up next, on Nov. 28-29, funded in part by Jan Shrem and Maria Manetti Shrem: Gustavo Dudamel and the Simón Bolívar Symphony Orchestra of Venezuela. Donors' gifts just keep giving.