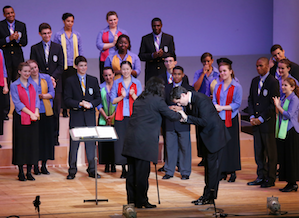 Youth orchestras and youth choruses from the Bay Area enjoy their share of globetrotting: just take the San Francisco Symphony Youth Orchestra or Young People's Symphony Orchestra, which toured Prague, Bratislava, and Vienna — after China in 2006, and Australia and New Zealand in 2008.

But today, it's time for the wondrous Young People's Chorus of New York City, led by Artistic Director/Founder Francisco J. Núñez, which recently completed a month-long tour of Asia, its fifth trip to the continent, with performances in Hong Kong, Shanghai, and five Japanese cities, including Tokyo, where YPC made its Tokyo Philharmonic debut.

The YPC performance in Hokuto, Japan, was streamed live on Ustream TV, and it's still available. Click on No. 5 on the right side, among "Videos" or go directly to the concert. The program, after four minutes of speeches, is: