For some, music is simply a calling. And if all the planets align, a successful career can become a reality. In the case of pianist Audrey Vardanega, it was unquestionably her destiny. An Oakland native, she began studying piano seriously at age 6, debuted as a soloist with the San Francisco Chamber Orchestra at age 10 and with acclaimed conductor George Cleve at the Midsummer Mozart Festival when she was just 11. She played her first solo recital a year later at the Festival Del Sole (now the Napa Valley Festival). Now at just 25, her years of experience touring internationally as a solo and chamber musician have earned her numerous accolades. In addition to performing, she is also a composer and is the artistic director for Musaics of the Bay, a chamber music program she founded in 2019 that pairs performers and living composers with visual artists, poets, sculptors, and filmmakers to create musical compositions based on works of art. The series runs every Monday through June 2021.

I chatted with Vardanega from her home in Oakland about the blessings and the challenges she has faced along her musical and personal journey.

How did your interest in music begin?

My parents are not musicians, but my mother was a film actress in China a really long time ago, so the arts has always been a big part of life growing up in the family. Neither of my parents had the opportunity to study an instrument seriously, so they pushed me to try all sorts of different things when I was pretty young, but it was really the piano and composing and music that stuck with me and that really became my language.

I was very shy as a child, so this was a way for me to feel safe and help me connect with other people. It was like a bridge to the world, a way for me to start to understand and process emotional intelligence and learn about different feelings. For me that was done through playing Mozart and Beethoven and chamber music.

You are also a composer. How did you get started with that?

My first composition was when I was six. When I was around 11, I started working pretty intensely with Arkadi Serper, a composition teacher at Crowden [School, in Berkeley]. He was a big compositional and musical influence on me. We came up with a libretto together, a story about a princess in Italy who runs away with the gypsies, and I wrote a 30-minute ballet suite for full orchestra [Zingara]. It was a long process — it took a few years, and it was an opportunity to explore that world of fantasy within the realm of music.

Are there any particular composers that move you more than others?

I find that I'm more drawn to the Germanic tradition, like Bach, Schubert, Brahms and Schumann, and especially Beethoven. I find so much fulfillment and satisfaction just by analyzing and working on his pieces, both solo and chamber. That breadth of that repertoire is just so incredible. I was really fortunate to work on a lot of Beethoven's chamber music with Tanya Tomkins and her Valley of the Moon Festival over the course of the pandemic. We recorded a bunch of Beethoven sonatas for violin and piano and cello and piano and that was such a meaningful experience, especially working on period instruments. It's like an unending trove working with them.

What was the experience at Crowden like for you?

I really came out of my shell at Crowden because music was so interspersed with learning. That was the place that really helped me incubate and forge my love for music. It was so intense, but it was such a comfortable intensity. Having participated in many prestigious music festivals across the country, Crowden was the place that was really nurturing. It was just filled with love.

You are still quite young but have had many incredible experiences — performing, touring, and working with many acclaimed mentors. What was that like? Did you even realize what an amazing life you were leading?

I think so. From age 11 to 15, I was working with George [Cleve], and at the time I did recognize how special that experience was. I was so fortunate to be able to work with him and all the excellent musicians that I played with and learned from. But it wasn’t until my early 20s when I started to really recognize the amazing opportunities that I’ve had growing up and how fortunate I was to have George as a mentor and have my parents, who were trying to make sure that I wasn’t missing out on other opportunities to learn about the world in other ways. For that I’m truly grateful, because I actually took an unusual path after high school.

What do you mean by an unusual path?

I went to Columbia where I studied political science because I didn’t know what I wanted to do. I didn’t want to just play piano and miss out on learning about the world in other meaningful ways. But there was that sense of frustration, because I felt like I was losing something. I had this feeling in my gut of something not being fulfilled because I wasn’t exploring new repertoire on the piano. I wasn’t immersed in that way and that was the big indication to me.

Going to Columbia instead of a music school was sort of rebellious?

Yes. It was absolutely rebellious. It was like — I’ve done this my entire life, so I don’t know if it’s me that wants to do it, or if it’s just out of habit, so it was a very deliberate choice to go and learn about other things. I had a very different view of my life. I was convinced I was going to be a journalist or go into economics or work on Wall Street when I was a freshman in college. But that year of uncertainty and of searching was so, so important, because it was through that that I found total intention, and for me, once I found that intention to be a musician, it was crystal clear — that’s what I’m going to do. 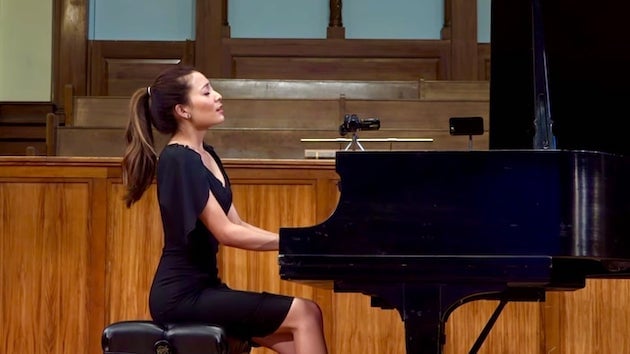 You got your Master of Music at Mannes School of Music. Tell me about that.

After Columbia I was really fortunate to start working with Richard Goode at Mannes. He is still my piano teacher and that has been the most incredible musical experience, having this mentor who is so curious and so excited about music. Having those one-on-one times where I could explore this amazing repertoire with him after having this period in college where I was confused and undetermined about what my relationship to music was going to be — that's been one of the great blessings of my life.

What inspired you to put together Musaics of the Bay?

Originally, I was just so disenchanted with the fact that opportunities for classical musicians are so hard to come by. I had been at the Ravinia Festival in residence with 30 fantastic string players and pianists from all over the world, and it was so disheartening to see how the classical-music culture was sort of survive or die. You either get picked for the solo position or you get a relationship with this orchestra or you get management, or you don’t. Those were the two options, so it created this anxiety among my colleagues.

What was the concept for Musaics of the Bay?

I wanted to create a chamber music series in Berkeley with some mentorship component — something in keeping with the Crowden School’s values of integrating music with life and who you are as a human being. It was just a concert series, but then Covid hit and everything changed. I just sat in Berkeley for a month, completely confused and a little bit traumatized. But in May of 2020, I started the stay-at-home symposium. We had members of the Musaics community submit art that they loved or had created for the purpose of having some of these art pieces inspire new compositions. What ended up happening was that all these incredible visual artists from not just the Bay Area, but around the world, started submitting their original pieces, some of which were displayed in the Metropolitan Museum or the MoMa or the Tate or the Smithsonian, and I was just floored. We released these premieres every week on YouTube, and we are at our 30th commission and world premiere on Monday, January 25. I’m really proud of everyone who has participated in making this possible.

How has the pandemic affected your life?

I had to move back in with my parents because that was what made the most sense. I have been very fortunate to have that as a base and I have used this time to totally devote myself to what Musaics is doing and build this network and foundation with the hope that this can become something really meaningful for artists in the future.

Considerable talent and a magnetic stage presence are but two of the gifts of an ad hoc musical duo, Nathan Chan and Audrey Vardanega.

The Kids Aren’t Alright, but Music Will Help

Brian Baumbusch, Lisa Bielawa, and Danny Clay hope that their musical reflections during quarantine will resonate.