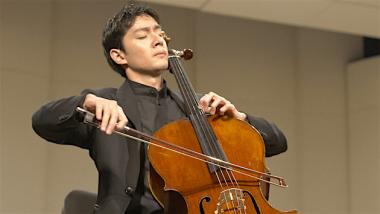 Raised in a musically fertile environment in the Bay Area, David Requiro, now a successful 34-year-old cellist, enjoys bringing his bounty back home now and then. Later this month, he’ll join [email protected], performing and teaching.

Son of a Filipino father and an Eastern-European-American, piano-teaching mother, Requiro attended Berkeley’s Crowden School, the Cleveland Institute of Music, and the University of Michigan. He garnered first prizes at the Klein, Washington International, and Naumburg competitions, made concerto appearances with orchestras across California and the country, and became a featured soloist nationally and internationally in both classic and contemporary repertoire.

Joining the faculty of the University of Colorado in 2015, Requiro has also secured faculty appointments at Bowdoin, Innsbrook, and Maui. A frequent chamber player and a member of the Baumer String Quartet, he co-founded the Monterey Chamber Music Workshop and last year was appointed by the Chamber Music Society of Lincoln Center to its Bowers Program. SFCV, whose Lisa Houston interviewed Requiro in 2010, caught up with him again from his family home in Boulder, before his embarkation on a string of summer festivals, including Menlo’s.

Where does your summer start?

First, we head to Washington State, for a festival in the Cascades. Then down to [email protected], and after that, back across the country to Portland, Maine.

I met my cellist wife, Meta Weiss, in Blue Hill, Maine, at Kneisel Hall [founded in 1902 by violinist Franz Kneisel, for what was purportedly the nation’s first fully professional chamber quartet].

Do you have any kids to take along?

Yes, we have a six-month-old daughter, Mia. And some of these festivals my wife and I are doing together, so we’ll both be teaching and performing.

Does that mean you might have to find a spare violinist to babysit now and then?

[Laughs] Well, we have to plan out very carefully, but we’ll be getting some great help from family.

From Maui to Japan, does your geographic scope serve you well?

It can mentally balance things out; it’s what makes creativity and artistry more exciting. But there are some circumstances where it’s a little different: I once did a competition in Japan where I was hoping to experience the sights and sounds. I was lucky enough to advance to the final round, but that meant I was mostly practicing. So some future trip to Japan will have to be more like a vacation, hopefully.

I’ve been there at two stages of my life. The first was back in 2005, as a student in the International Program, I went there with my college quartet from the Cleveland Institute. Then last year, I returned as artist faculty.

Anything different this summer?

Currently I’m part of the Bowers Program of Lincoln Center, and Ann Bowers [former Intel and Apple executive and a startup consultant] has been a huge supporter of [email protected], so to be a Bowers Artist with CMS [the Chamber Music Society of Lincoln Center] and also have the connection at Menlo is very exciting. And there’ll be a really nice balance of performing and coaching, where I get to work with students from the International Program, who are already successful string players and pianists of graduate school age, but also I have a chance sometimes to work with the younger program, talented kids from across the country. We have master class opportunities, and a lot of faculty rehearsing and recording, as well as performing.

What do you learn from teaching and coaching?

You always learn from students who are really dedicated to their craft. Even at a young age, the level of musical creativity that they bring to these very difficult chamber works really fits. To see their phrasing ideas, their bowing ideas, whether it’s technical or musical, it’s just really impressive.

Even with the youngest students?

Everybody’s studying with top teachers around the country, and sometimes, when you’re in that high school age range, you really have a lot of time to focus. And there’s a fresh excitement: high schoolers haven’t gone through the grind of undergraduate or graduate university or conservatory, and they’re experiencing some of these chamber works for the first time.

How was it for you as a kid, getting your early music schooling at Crowden?

I was around a lot of supportive musical families. And my main cello teacher in the Bay Area, Milly Rosner, gave me so much attention, I can’t believe how lucky I was. I play in the Baumer String Quartet for part of the year, and it has a lot of Bay Area ties: my older brother, [violinist] Aaron, and the first violinist, Nathan Olson, we all went to Crowden. After Crowden, the San Francisco Symphony Youth Orchestra was an amazing experience for me and being a part of the Junior Bach Festivals.

Did you have any interactions with John Adams at Crowden? I’m noticing that one of his pieces, Road Movies, will be featured in a concert program at Menlo.

Actually, he happened to live a few blocks away from my family, and his kids went to the Crowden School, so we carpooled it. His son, Sam, was about a year younger than I was. It’s funny to think about it, but he was our carpool driver sometimes.

What was John Adams like as a carpool dad?

Very nice, very conversational, very patient. And he was very kind in working with the students at Crowden. I remember some spring concerts that he would conduct. We even played his Shaker Loops at one of those concerts.

Was your Klein International String Competition win in 2006 significant?

Yes, and I’ve stayed in touch with the competition ever since I was a part of it. My wife, Meta, was a top-prize winner and I have a student from Colorado [Dakota Cotugno] who got second in the competition a few weeks ago.

The Adams work is part of the seventh in this summer’s series of concerts at Menlo, which proceed historically. Is that one of the special things about Menlo for you?

It basically has to do with intensity. Everybody, whether it’s faculty or students, is very busy, in the best way. It’s a festival where enough rehearsal time is always built into the schedule and for students — when you consider their rehearsal and — they get exposure to so many artist-faculty. At a lot of festivals, student groups might work with only one or two artist faculty for a week or two, but at Menlo they’re working with new artist-faculty every day. And for me, what’s special is the balance of my playing standard and traditional — your favorite meat-and-potatoes pieces like the Chopin Cello Sonata [July 25 and 26] and the Ravel Duo [July 31] — but also what will be a new work for myself, the Micro-Concerto by Steve Mackey [Aug. 3].

Please tell us more about that piece.

It’s like learning a new language, in terms of the rhythmic interplay and the timbre of sound, with mixed woodwinds, percussion, piano, and strings. It’s just not that common. But I’m going to play it with artists who have already performed it and they’ll already have really special insights, not just interpretively but technical tricks as a chamber ensemble, which will help make certain passages click together.

So it’s important to keep growing into new repertoire.

Absolutely, and I think I have that goal in mind when I program local concerts here in Boulder, like faculty recitals. I have wonderful composition colleagues, so it’s nice to get to tackle those new works.

What kind of stuff is particularly fun for you?

The opportunity to work in new ensembles with new instrumental timbres, like the Mackey at Menlo, where I kind of juggle how the technical side of cello playing meshes with the different instrument groups. What changes do I have to make from playing a Mozart string quartet?

There isn’t much in your bio about recordings, so can you fill us in?

One of the most special aspects of being faculty at Menlo is the [email protected] Live recording contract, where every concert is recorded and released, both as physical CDs and over streaming services. We get to work with multiple-Grammy-winning recording engineer Da-Hong Seeto, and that’s a dimension which is also not at a lot of other festivals. Away from Menlo, I’ve recorded albums with my wife, Meta. We have that rare format of duo cello, so we’ve put out an album with a lot of standard works, but also some of our own transcriptions. The Baumer String Quartet is affiliated with InterMusic SF, and we have a CD about to be released later this year.

Any pronouncements on the state of the chamber art?

It’s a great time for chamber festivals and series, there’s more variety in projects starting up than there maybe were 20 or 30 years ago. Maybe social media help, but there are more residencies at different educational institutions and a focus in schools on entrepreneurship. Schools are more often offering double degrees, with arts administration and classes to help students prepare an all-around press kit. There’s a lot of desire to get projects off the ground, instead of just falling into the same old groove.

Cellist David Requiro lives in New York City, where he plays with the critically acclaimed Jupiter Symphony Chamber Players. The Oakland native has performed with numerous local orchestras, as well as the Tokyo Philharmonic, National Symphony Orchestra, and Symphony Pro Musica in Boston. He has debuted at Carnegie Hall and the Kennedy Center. This week, he joins his long-time collaborator, pianist Miles Graber, for a concert as part of the Noe Valley Chamber Music Series.