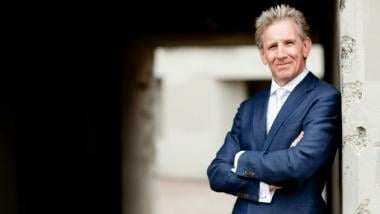 "I think that as people approach a certain stage in life, they begin to ask themselves big questions and begin to think about more permanent notions, and I think an orchestra can help provide the answers to some of those big picture questions," muses Alasdair Neale. And he should know. As music director of the acclaimed Sun Valley (Idaho) Summer Music Festival for the past 21 years and coming into his 15th season with the Marin Symphony, he has had a lot of time to reflect on music — and life — and what has kept him engaged in it for so many years.

Neale's devotion to refining his craft is evident in his personality and style as a conductor — he is known to be humble (unusual for a conductor), upbeat, collaborative, serious about the music (but quick with a smile), and treats everyone he works with — musicians, staff, administration — with genuine respect. This affability, along with his significant talent, is reflected in his long tenure with every organization he has worked with — including 12 years as associate conductor of the San Francisco Symphony and music director of the San Francisco Symphony Youth Orchestra, 10 years as principal guest conductor of the New World Symphony in Florida, and 13 years on the faculty at the San Francisco Conservatory of Music.

I met recently with Alasdair Neale at his flat in the stylish Marina district of San Francisco to talk about his career.

What influenced and inspired you to become a conductor?

Everybody has a different path to the podium and mine was really a natural outgrowth of a fascination I had as an early teenager with essentially the anatomy of the orchestra.  I started playing flute when I was nine and then I added cello into the mix when I was around 11. Then I started composing and that was accompanied by score study.

Now—where blind fate came in, or just dumb luck I guess, was the fact that I was playing in a little youth orchestra in Edinburgh at the time. Coincidentally, the music director was a young Donald Runnicles—he was my first youth orchestra conductor. You can't make this stuff up, [he laughed].    One day, they asked me to conduct a wind rehearsal, and by the time I was 16, I found the orchestra had asked me to become their conductor. So I had a couple of great years conducting there before I went to college, and that put me in good stead.

And at that point in your life, did you know you wanted to become a musician professionally?

Not immediately. I hadn't thought that far into the future. I didn't think of this as a profession—I thought of it as an avocation, and in many ways, I still do.

Was your family supportive?  Were there any musicians in your family?

Yes. My parents are both musical. They both sang in choruses. My mother was a grade-school music teacher and played the piano, so music was always part of the furniture.  I didn't hear a single note of pop music until I was 11 or 12. My mother always had the classical music station on, so it was just as natural as breathing air to me, growing up. The ultimate "Catch 22" situation is perhaps starting to be a conductor, because nobody really wants to put you in front of an orchestra unless you've got experience and the only way to get experience is to get in front of an orchestra.

At what point do you think you knew it would be conducting?

That was more gradual. I had a lot of opportunities to conduct at Cambridge as an undergraduate, and it was really during that time that I came to realize that conducting was the path forward for me. The ultimate "Catch 22" situation is perhaps starting to be a conductor, because nobody really wants to put you in front of an orchestra unless you've got experience and the only way to get experience is to get in front of an orchestra.

You are coming into your 15th year with the Marin Symphony.  Where do you feel you have taken it and where would you like to go with it?

I've been just thrilled with the journey I've been able to make with the orchestra.  And I still continue to be impressed and inspired by their abilities. I think they're playing at a marvelously consistent and high level and what they bring to the table is not just technical polish, but I believe a palpable sense of commitment and passion about music—which really makes its way across the proscenium arch to the audience. I'm so grateful for their enthusiasm and willingness to sort of go to that next place with me, and it's something I don't take for granted.

What do you believe is the role of the orchestra in the community?

I think there are multiple answers to that question, and they would include an orchestra advocating on behalf of the relevance of this incredible treasure-trove of great art that we are at once curators of—and practitioners of.  It's a really powerful message that we have, and part of our challenge is to find a voice that is powerful and audible.

So then it's not just about entertainment?

No—it's about enrichment. It's about giving yourself the opportunity to be asked by these great composers some pretty deep questions about what it is to be part of the human condition.  And that's what is so wonderful about classical music to me.

Tell me about Sun Valley.  How does that compare to Marin? How do the two contribute to your growth as a conductor?

The experience in Sun Valley is unbelievably concentrated because the festival takes place basically in about three-and-a-half weeks, during which time I conduct something like 14 programs.  So there's this incredibly immersive aspect to it that is thrilling, and sort of terrifying at the same time. But the thrill of working with this national all-star orchestra in this incomparable setting is a real joy for me and something I'm incredibly grateful for.

As a conductor, where do you get your inspiration? How do you keep yourself excited about the music, and where do you see yourself going in your career?

The inspiration continues to come from the music—it always has, and it always will. And so the quest is never ending. It's constantly one of the refinement and understanding of the pieces I've lived with all my life, as well as excitement about exposure to new music.

Over the years, have you noticed any changes or growth in your role as a conductor?

It's hard to say, but at some point over the last five years or so, for reasons I'm just not able to articulate, things have come together for me in a way that they hadn't before—and I feel that I'm sort of over the hump of figuring out how to conduct [we both laugh]. Some people maybe reach that at a much earlier age, but I just feel that my personal growth has happened at a more relaxed pace.

What is growth for a conductor?

Good question. [He pauses to think.] I think it's tied up with life experience—all of the joys and sorrows that accompany getting older and understanding on some very deep level the subtext of the music—and understanding that in a deeper way than I might have done 20 years earlier.

What is your vision for the future of the Marin Symphony?

Well, I want to play more music with this orchestra. We don't play enough and it makes all of our collective jobs harder.

What would be the first thing on your wish list?

What I'd really love to see is a vibrant 21st century center for the arts [at the Civic Center in Marin] that acts as a nexus for the whole community—an irresistible gathering place where people can come and it will have a kind of gravitational pull—something that's filled with light and space and it's a destination.

If someone waved a magic wand and said "Alasdair, what would you really like to do," what would that be?

I'm happy doing what I'm already doing. I have two amazing orchestras of which I am fortunate enough to be music director, and knowledgeable and appreciative audiences. I certainly consider myself very, very lucky indeed. I have been given the chance to fulfill a dream, and so I just want to be the best musician I can be, and to grow further, to understand more, and to be able to share that with musicians and the public.  I can't think of anything that would make me happier.