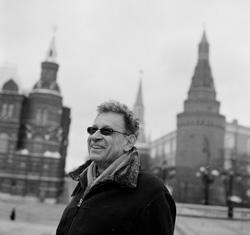 Daniel Pollack: From Russia With Love

“I’m the only one who’s still there,” declares Daniel Pollack. He’s commenting on his abiding popularity in Russia, the site of his prize-winning appearance in the very first Tchaikovsky Piano Competition, in 1958, when he was 23. The first place in that historical event went to another American, a year older, who became far better-known in this country, That was Van Cliburn, who was feted by George Bush and Vladimir Putin in Texas in 2008, on the occasion of the Competition’s golden anniversary. But it was the eighth-place pianist Pollack who was invited to celebrate that year in Russia, in soloist spots with conductors Valery Gergiev in St. Petersburg and Yuri Temirkanov in Moscow. Prominent orchestral pairings had begun early for Pollack, at age 9, with the New York Philharmonic. He went on to Juilliard and a Fulbright Fellowship in Vienna, from where he traveled to the Tchaikovsky challenge. His success there endeared him to the Russians and launched his now six-decade-long performance career at home and across the globe. Pollack has also been sought as an international competition juror, and has recorded the works of Chopin, Barber, and others. Pollack returned to Juilliard as a visiting artist and is currently on the faculty of the Thornton School of Music of the University of Southern California, not far from his Hollywood Hills home, from which he chatted with SFCV about his life in music and his upcoming San Francisco appearance, on Jan. 9, in Temple Emanu-El’s Music at Meyer series.

What do the Russians like about you so much?

I think my rapport with those audiences is a very special one. It’s not that American audiences are different, but there’s a reaction that I feel instantly there. I just came back from a concert tour in Kazakhstan. I was the first American there, so that was quite special, too.

And the Russians embraced you pretty quickly, after your placement in the Tchaikovsky, 53 years ago.

It was because my type of pianism is more akin to what they’re looking for.

Please tell us about your pianism.

I have a feeling that I’m more in the Golden Age of Romanticism, and that means a sincerity with the music. I’m not there to show off. I’m not doing things to try to appeal insincerely to the public, because they’d know that immediately, even the untrained musicians. There has to be true heart and honesty in your performance, not manufactured or made-up or plastic.

Here at the Meyer, you’ll have Chopin, Liszt, and Scriabin on your program, as well as some Debussy. Does your affection for music from Central and Eastern Europe go way back?

Absolutely! My debut with the New York Philharmonic was with Chopin’s First Piano Concerto, in E minor.

You went on to study with a Russian, at Juilliard.

Madame [Rosina] Lhévinne. We explored how you make the piano a singing instrument. Although it’s “listed” as a percussion instrument, it has all the singing qualities possible.

You continued your study with a Fulbright Fellowship, in Vienna. Did you find a different attitude about classical music, with the Europeans?

Decidedly. They’re very nationalistic. In Vienna, you had a heavy diet of German repertoire. I think they’re very rooted in their own culture, and I could see that could be a problem: If you’re not performing what they’re looking for, they weren’t about to receive you very openly. That’s true in a lot of countries in Europe: France, Germany, Belgium, they’re not as open. They’re much more reserved, as audiences, compared to the Russians. If you’re a reserved culture, it takes a longer time to ignite something. And in our country, I think we’re much more open. My teacher at Juilliard said that, in America, we have the “Sponge School of Piano Playing,” because we’ve soaked up knowledge from our ancestry and come out with something uniquely our own. In Germany, if a piece was taught 300 years ago, it’s going to be exactly the same way [now]. There’s not the breath of air that allows for something new.

When you went to Russia for the First Tchaikovsky Competition, did you feel you might have placed higher if you hadn’t been American, and if the top prize hadn’t gone to another American?

I don’t think they expected any Americans to win! They felt Russians would win. They had not only one American winner, they had two, and that was the most shocking surprise of the whole Competition.

There has to be true heart and honesty in your performance, not manufactured or made-up or plastic.

What did the Americans bring to the Competition? Did you and Van Cliburn play in any kind of “American” way?

So what was special about you?

That we had a virtuosity and emotion and artistry that they didn’t expect Americans possessed. They’d been fed all kinds of propaganda: that we were a very materialistic, uncultured kind of society.

You belied the propaganda.

Precisely. We were there in the flesh to prove it otherwise.

And then you not only got to concertize, you were the first American on the state-run record label, Melodiya.

That was one of a lot of “firsts” in Russia, which included playing in cities where no American had been before. That was the height of the Cold War, and here I was like a movie star, or a big, famous athlete.

The implication is that the Russian people really wanted to get to know Americans.

You’re compared by some critics to a pair of pianists from Russia and Poland, [Vladimir] Horowitz and [Arthur] Rubinstein. Is it because your style suggests those Eastern traditions, or because it’s an older style?

My own feeling is that my style comes from a different generation, yes. And those are two pianists I admire greatly. One was known for possessing the absolute bel canto, the warmest heart, and stunning naturalness in playing — that was Rubinstein. And Horowitz conjures up electricity, burning heat, over-the-edge excitement. They’re two different kinds of personality. But Rachmaninov had a similar crossover bent [to mine]: high romanticism, with cutting-edge pianism. Today, I feel the younger pianists are more out to impress, and don’t have the musicianship or background or culture. It’s showy, and not genuinely from the heart.

Have you found that sort of thing at competitions where you’ve sat as juror, including the Tchaikovsky?

My style comes from a different generation, yes.

Sadly, those who play loud and fast are coming through more often than they should, and that’s sending a false signal about what competitions are about. It shouldn’t be a horse race. I’m looking for pianists that are gonna excite me and touch me, who I feel are worth my going to hear again. I just came from a major competition in Kazakhstan where I was on the jury, and I found a couple of talents which had that kind of magnetic pianism, even at a young age. I don’t know about my fellow jurors, what they’re looking for, but I think, if they were in touch with their own feelings, they would come to the same conclusions. But a lot of times, things get clouded by politics; it’s who knows whom, and where they’re from. And that doesn’t interest me, it really doesn’t.

That’s not how you’ve pursued your own career.

There’s a responsibility when you cross the stage, a responsibility of mine to the audience and to the music I’m playing, and if I don’t have it, I shouldn’t be in the profession. That’s what has hurt our audiences, when they’ve been exposed to inferior musicianship. They go to concerts and think, What am I doing here? This is rather boring, I’m not gonna do it again. There’s just too much dilettante amateurism. The audiences aren’t touched. There’s no passion or appeal.

I’d like you to share an experience that touched you: visiting Tchaikovsky’s home in Kline, Russia, and playing his piano. What make was it?

It was a Becker. I’ve played on several pianos composers have worked on, like Beethoven’s, Grieg’s, and Chopin’s, as well as Tchaikovsky’s.

Did the pianos tell you anything about the composers?

It’s not just the pianos, it’s the settings, and the atmospheres. I think you find the soul of the person there; it’s absolutely awe-inspiring. It’s just like you’re meeting the person in the flesh, especially if it’s where they composed. You feel their flavor, and everything associated with their life.

Another fascinating side-road of your career had you performing for a joint session of the U.S. Congress, honoring President Harry Truman. Was that connected with his background as a pianist?

Yes. I was fortunate in meeting him; he had a great love of piano, and of Chopin and Rachmaninov. We became friends, and I played many times at his Library, in Independence, Missouri, where they have a lot of pianos. He was an admirer of Josef Lhévinne, who was the husband of my teacher at Juilliard, whom I’d played for, when I was a child. And he was a man of the people, and that’s a rare quality.

You seem to me like a man of the people, partly because you don’t look down your nose at the world of pop culture.

We’ve learned a lot from that world, from smart entrepreneur talents who are creative about building audiences. I admire great artists who are phenomenal, like the late Michael Jackson — an absolute genius, like Elvis Presley. The art form doesn’t matter. The greatest artists have something to say, and they touch everybody.