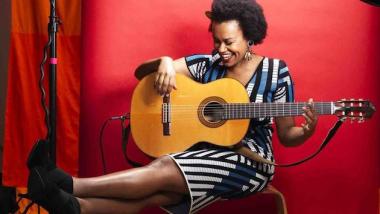 Singer, songwriter, and composer Meklit Hadero started at the Yerba Buena Center for the Arts as the new chief of program in January. Before stepping into this role, Hadero had worked with YBCA for about a dozen years. She says she admires the organization for its commitment to civic engagement through the arts, such as with the upcoming exhibit, Come to your Census, which encourages participation in the 2020 census.

Hadero, known for her take on Ethio-Jazz, has performed all over the world, including in Addis Ababa, New York City, London, Montreal, Nairobi, Chicago, Los Angeles, Rome, Rio, and Cairo, and now she is balancing her artistic career with leading an organization.

In her office at YBCA, Hadero talked about that balance, why she picked her title, and bringing the YBCA’s film, performing, and visual arts programs together.

How did you first get involved with YBCA?

I first came in contact with YBCA through Joel Tan 11 or 12 years ago. He was the director of community engagement at the time, and I was co-directing the Red Poppy Art House. Joel invited us to curate the Room for Big Ideas, which is our annex room near the front doors. We did a month of performances there and that was the first time I was involved with YBCA, and I’ve done many projects since. I was the lead artist for a project called Home Away from Home. I was on the board for almost four years. I did a performance in the Topham Room when Joel was still here thinking about how YBCA uses its lesser-known spaces — it was a rehearsal space below the theater. Then YBCA debuted my last album in 2016, and there’s probably something I’m forgetting. We’ve worked together a lot over the course of about 12 years. And I was an artist-in-residence in 2019 here.

What’s different or special about YBCA?

For me, having a space where I have these two sides of my work — one of which you might think of as the music industry where I write songs, make albums, videos, tour. These things that are more the known universe of a musician’s life. And then I have this other side of me where I work with arts and culture programs, projects, and organizations — where I think about the intersection of arts and social change. Those are two things I’ve gone back and forth between for my entire artistic career. YBCA is a place where I can be both and do both, and there’s actually not that many institutions where that kind of intersection of arts and social change is the very core of who the organization is. This is a place where that’s true and where I can really be myself.

How did you choose your title, chief of program?

There were a lot of options. I wanted to make a stake in the ground and be real direct about what I was doing. For an artist like me, there’s a lot to explain. I’m not really a sentence — I’m kind of a paragraph or a whole page. I wanted my title to be really simple to kind of balance that. I wanted the title to be something that people could look at, three words, and feel like they could grasp and get their head around easily.

What are you bringing to YBCA?

I think I’m here to be a centralizing artistic voice, which doesn’t mean I’m deciding absolutely everything that happens. We’re still working with guest curators, we still have an amazing staff who have incredible offerings and have an incredible impact on the program. I’m here to do this work of desiloing the organization. Instead of having, the department of visual arts, the department of performing arts, the department of engagement — it’s all together under program. It’s about thinking of ourselves as an ecology, so rather than having lanes of programs, we are working in a networked, collaborative way amongst the disciplines with me at the helm bringing all those things together.

It’s interesting, and it’s a transformation for the organization, and it’s not the way things are typically done. It’s been a long process it’s not just starting with me — we’ve been working towards this for a year. Organizational changes can be slow and what is slow? For me as an individual artist before this it was like, what I wanted, I would do. Big ships turn slow. But I think we’re also in a place where we’re using those changes to make us more nimble, more responsive to the world around us, more integrated amongst ourselves, so using the change to build momentum.

Ethio-jazz is a type of jazz that was created by Mulatu Astatke [born 1943]. It brings together Ethiopian scales, which are pentatonic scales and unique, and Ethiopian rhythms with American jazz, and with jazz improvisation and jazz vocal techniques. It was pioneered in [the] late ’60s and early ’70s, and people tend to know it from a series of albums on a French label called Buda Musique, and the series is called Ethiopiques. It was a real time of innovation in Ethiopia musically, and then it was cut off by the revolution in 1974, and then curfews were imposed and the clubs closed. Many other artists have taken that up in the last 40 or 50 years, but it’s still only about 20 albums that [one] could think of as Ethio-jazz. I see myself as part of a continuum of artists, but also it’s a style of music that could still grow and evolve — it’s still becoming itself as artists continue to experiment.

How are you able to do this job and have your career touring and performing?

The great thing about this role is that this is a role that’s meant for an artist. If you as an institution are going to invite an artist into this role, you have to accept that an artist has to keep making their art. YBCA has been so open about that. It’s also a mutually beneficial situation because every time I am on a national or international stage, I am an ambassador for this organization. So we have figured out a way that both sides of this work can feed the other. Of course there are challenges, the main one being that there are only so many hours in a day. I’ve only been in this job about six weeks, so we’re figuring it out.

Really? I thought it was longer.

It was announced in September, but I started in January because I said to YBCA, “I would love to take this job, and I need a maternity leave.” I had worked for almost a year to carve out the time to make sure that I was going to have a maternity leave, which is a very big challenge. At the time I was an independent artist and to structure that is hard. I was at the point where I was accepting the job, and I was like, “If you want an artist in this role, if you want a woman in this role, if you want a new mother in this role, that’s going to mean I need a maternity leave,” and YBCA was enthusiastic. They were like, “Take your time. When do you want to start?” That meant they were waiting for me for a while, but also it meant this was a space that could stand up for that value, which was very impressive.

Something that YBCA CEO Deborah Cullinan said about you when you started this job is that you have a real commitment to inclusivity. Could you talk about that?

I feel like I have a commitment to making sure the world that is out there in our community and neighborhood is the world that shows up on our stages and gallery walls. I’m also inspired by the artist Alice Sheppard who I recently met, who talks about moving beyond inclusivity and into equity. I’m inspired by that, so that’s what we’re going for here. That’s where my mind is right now. She’s a disabled dancer and an incredible choreographer, and somebody I’m really learning a lot from.

What is your vision for what you want to do with programming?

What’s really exciting for me here is our senior-fellows program, and they were announced in the fall and started in January with me. That’s Brett Cook and Liz Lerman. There are cohort fellows as well, and they are looking at public participation. There are 10 of them, and they are going to be doing a public square in June around public participation, which will be integrated into our Come to your Census exhibition.

And what’s exciting about the senior fellows is it’s an opportunity for us to invest deeply in these artists, but it’s also our opportunity to let the fellows lead us in terms of what our programming is going to be.

We’re doing all kinds of retreats and brainstorming sessions, and they’re going to be leading an evolution of coming programs in the next two years. We’re going to do a kind of experimental year in 2020 and bigger programs in 2021 with our senior fellows. For me it’s really exciting to be able to learn from these artists, to be able to empower them, and to empower their networks and communities, and to make space for YBCA to be a true home for artists. It’s not just the place where they present their work once it’s done. How can this space for arts and social change be a true home for creative change makers in the Bay Area?

I think YBCA 100 is one of the most powerful events we do. They’re amazing, and we’re doing more work around how we thread the YBCA 100 through the year rather than just being one summit. The new exhibition we have opening on March 27 is called Come to your Census, and we’re working with dozens of artists who are inspiring participation in the 2020 census. It’s about who counts in America, especially in this environment where the census is shorter this year and people are afraid of showing themselves. How can we make sure people are inspired and want to participate in the census, considering it’s responsible for so much money that comes into San Francisco? Everything from FEMA funds to WIC and EBT. Not to mention the number of representatives in the House, and your delegates in the Electoral College. This is an incredibly important civic-participation moment, and so we’re working with artists to inspire participation around that and creating a real funky, very dynamic exhibition experience. It’s curated by our public-life team, and that’s inspiring to me. A lot of times when we say art and civic impact, those can be words that exist at 10,000 feet, and we really want to show what that means, and this is a strong example.

The successful, young executive is ruffling some feathers with her message of change for classical-music organizations.

The San Francisco Conservatory of Music’s president has a strategy to make music conservatories broader and more relevant.

These Therapists Heal Through Music