In what almost seems like an alternative universe, not so long ago, when the performing arts weren’t just a virtual reality, you could have found acclaimed soprano Janinah Burnett in any number of places — interpreting roles like Bianca in La Rondine at the Metropolitan Opera House, enchanting audiences as Carlotta in Phantom of the Opera on Broadway, or singing jazz standards with her own quartet at the Cell Theatre in New York City. With a range and mastery of such disparate styles, it is not surprising that her debut album, Love the Color of Your Butterfly, which was released Feb. 12, showcases that diversity. 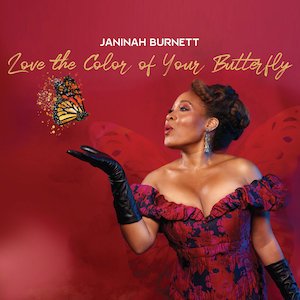 The record was produced by Grammy Award-winning drummer Terreon “Tank” Gully, a friend from college, who collaborated on picking and arranging the songs with Burnett. The noteworthy mix includes standards such as Cole Porter’s “What Is This Thing Called Love,” blended unexpectedly with “Habanera” from Bizet’s Carmen. There’s a funky, bluesy, stirring version of the spiritual “Keep Your Eyes on the Prize,” and several iconic Duke Ellington tunes. “E lucevan le stelle” from Puccini’s Tosca, which was originally written for a tenor, segues from art song to jazz. A highlight is the extremely moving, synthesized jazz/pop version of Sade’s iconic song, “Kiss of Life,” arranged by pianist Christian Sands, who appears on the album, along with pianists Sullivan Fortner and Keith Brown, Luques Curtis on bass, Casey Benjamin on vocoder, and Gully on drums.

Burnett, 42, grew up in Los Angeles in a house filled with jazz. Her father, acclaimed drummer Carl Burnett, worked with jazz luminaries like Horace Silver, Freddy Hubbard, George Cables, and Nancy Wilson. Discovering her talent and love of singing at an early age, Burnett attended Hamilton Music Academy, a performing-arts high school, and continued her studies at Spelman College in Atlanta, which is historically for African-American women. She completed her education with a masters in vocal performance and literature at Eastman School of Music in Rochester, New York, where she had the opportunity to perform operatic roles.

And although her parents divorced when she was just 7, her mother, writer/editor/educator Imani Constance, who had broad musical taste and was still very much entrenched in the jazz world, remained a strong influence in her life both personally and musically. In fact, the name of the album came from something her mother once told her: “You can’t be another butterfly — you have to love your butterfly.”

Joining forces with baritone Kenneth Overton, Burnett created a multimedia show, I, Too Sing America. Originally inspired by Michael Brown, an 18-year-old Black man who was fatally shot by a white police officer in Ferguson, Missouri, in 2014, the project has evolved to encompass further tragedies, adding names along the way, including George Floyd and Breonna Taylor more recently, and is designed to help people heal. It includes Burnett’s original writings juxtaposed with the poetry of Paul Lawrence Dunbar, Langston Hughes, and Toni Morrison that were turned into art songs, along with photography, spirituals, and freedom songs.

Did you always know you were going to be a singer?

Definitely. I always said I had come to the planet as a singer, and my parents knew that and cultivated it. If I wanted voice lessons, they obliged me. I did many, many things, but the thing that stuck and was always present was singing.

Along with jazz, were you exposed to other kinds of music, including classical?

Yes, but more minimally. In my house, it was never just one kind of music, but it was rooted in jazz. I went to a music academy high school and once I got there, I was clear that I wanted to be able to do everything under the sun with my voice. So I did the jazz ensemble, I did the madrigals ensemble and the all-city choirs — I kind of dabbled in both.

What made you decide to go to Spelman College, which offers a primarily classical-music program?

It was a series of happenings. Spelman had always been on my radar since I was in the seventh grade, but when I was at Hamilton and I was deciding on which college to go to, I had my eye set on Berklee College of Music because of the jazz program. But I was also really interested in the liberal arts, so I decided to go to Spelman.

It was a different world. My incoming class was filled with amazing singers of classical music. I had never seen young women who looked like me, singing this music joyfully and excellently, and I said, I want to do that too. But I was clear that I wanted to sing jazz as well, and they did have a jazz ensemble of which I was a part.

Classical music was so new, and at every turn there was something else that I needed to learn, whether it be diction or another language or another style. I just wasn’t privy to all of that in jazz vocal singing — it was just one lane, but within classical music there were several.

You moved to New York City and successfully straddled all these different worlds — opera, jazz, Broadway. Do they all bring you the same kind of satisfaction?

They all allow for different feelings. Oddly enough, I would say that Broadway can be the most restrictive, because we have time and visual confines, whereas in opera or jazz, the musicians kind of create the timeframe. With classical music, it’s fun to just let your voice fly out in a big open space and get into the crevices of a big hall. That’s why I love it. And some of them help the other — sometimes I look to jazz for the freedom when I’m feeling confined in one of the others, but they all are very near and dear to my heart.

Your debut album, Love the Color of Your Butterfly, is quite an unusual mix of styles. Are you pleased with the way it turned out?

I am overjoyed!  It has exceeded my expectations. Even before we mixed it, just listening to it raw, it sounded great. It is just an amazing delight.

Tell me a little bit about your experience making it.

I was playing with this idea of mixing genres, and one of the things we discovered in recording this album, was that the worlds weren’t as separate as we thought. What we had to be was good musicians — to be able to speak the language of music. That was all we needed, the understanding of what makes good music, rather than, I’m from the classical world, or I’m from the jazz world. It was like can you speak music? Can you speak music well? OK, then we can work together.

How has this period of not being able to perform live affected you?

Prior to COVID-19, I felt like I was running on a tightrope, because I was doing eight shows a week, I was doing my other projects — I was really working hard. So this time gave me the chance to really breathe and choose how to spend my time, and be inside with myself. It slowed me down and allowed me to listen. Of course, there have been things that have been stressful, but I must say, I have found a lot of peace during this time.

What are you contemplating for the future when the pandemic has passed?

My ideal is definitely to tour this album. We’re working now to do a virtual presentation that we’re going to shop around to various presenters who are doing virtual series. We’re just trying to figure out how that’s going to happen in the next few weeks to coincide with the release.

And I would love to get back to the opera stage. I’m a singing actress — it is my pleasure to interpret roles, so I look forward to doing more of that, to having the time and the space to learn new roles and then also to do my own concerts.

I can’t help but ask this, but what are the colors of your butterfly?

I would definitely say that it is red and fuchsia and purple and yellow with some azure blue in there and rose gold.

A Season to Be Thankful: In Conversation With Soprano Angel Blue

Hot off her success in Porgy and Bess and a nonstop run of gigs, the feted singer reflects on an artist’s life in the mandated slow lane.

Joined by Orfeo 55 on her latest disc, the ambitious singer/conductor puts her unique stamp on a wide swath of Baroque arias and songs.

The Year of Singing Safely: Susan Graham’s Operatic Art in 2020

The renowned mezzo-soprano talks about opera in the age of COVID-19 and her upcoming role in Jake Heggie’s Three Decembers with Opera San José.